Edit
This article is about the controversy over the use of the term. For actual camps, see German camps in occupied Poland during World War II.

Polish death camp and Polish concentration camp are terms that have sometimes been used in international media and by public figures in reference to concentration camps built and run by Nazi Germany in the General Government and other parts of occupied Poland during the Holocaust. The use of the terms has been described as insulting by the Polish foreign minister Adam Daniel Rotfeld in 2005, who also alleged that it—intentionally or unintentionally—shifted the responsibility for the construction or operation of the camps from the German to the Polish people. The use of these terms, explicitly mentioning "Poland" or "Polish", has been discouraged by the Polish and Israeli governments, Polish diaspora organizations around the world, and Jewish organizations such as the American Jewish Committee. 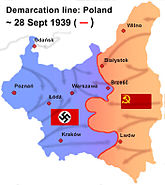 After the German invasion of Poland, unlike in most European countries occupied by Nazi Germany, where the Germans sought and found true collaborators among the locals, in occupied Poland there was no official collaboration either at the political or at the economic level.[1][2] Poland never officially surrendered to the Germans.[3] Historians generally agree that there was little collaboration with the Nazis by Poles, in comparison with other German-occupied countries in Europe.[4][5][6]

The Polish government, administration and army were able to partially evacuate to France and United Kingdom to continue to struggle against Nazi Germany abroad, with a new Polish Army quickly rebuilt.[7] The Polish government in exile was represented on the occupied territories through the extensive structure of the Polish Underground State,[8] and its military arm, Armia Krajowa, formed the major part of the Polish resistance movement, which was actively engaged in fighting the German occupiers and was the largest resistance movement in occupied Europe.[9]

A part of the former territory of the Second Polish Republic was annexed by the Third Reich and another part was used to create General Government, with completely German administration. The General Government had no international recognition. The territories it administered were never in whole or part intended as any future Polish state within a German-dominated Europe. Despite the functioning of the Polish government-in-exile, according to the Nazi government the Polish state had effectively ceased to exist.[10]

Since then many non-Polish media and notable figures have been known to make references to the German-run extermination program in Nazi-occupied Poland such as the "Polish death/concentration/extermination camp", "Polish Ghetto", "Polish Holocaust", "Nazi Poland", and so on, instead of German Ghetto, German Holocaust, Nazi Germany.[16]

A common explanation for the use of the phrase "Polish death camp" is that some of the infamous Nazi concentration ("death") camps (extermination camps) of Auschwitz, Treblinka, Majdanek, Chełmno, Belzec and Sobibor were built in occupied Poland.[17][18][19] However, two of the mentioned death camps were situated in lands annexed by Germany and most Nazi concentration camps were located in the territory of Nazi Germany. A complete list, drawn up in 1967 by the German Ministry of Justice, names about 1,200 camps and subcamps in numerous countries occupied by Nazi Germany.[20]

Opponents of these terms argue that they are inaccurate, as they may imply that the camps—located in Nazi-occupied Poland—might have been a responsibility of the Poles (i.e. Polish), when in fact they were designed, constructed and run by Nazi Germany and used to exterminate millions of Poles alongside Polish Jews, as well as Jews transported by the Nazis from across Europe.[21][22]

The use of terms of this kind, explicitly mentioning "Poland" or "Polish", has been discouraged by the Polish government and the Polish diaspora organizations around the world since 1989. Specifically the Polish Ministry of Foreign Affairs monitors and catalogs the use of the term and is involved in the actions asking for correction and apology.[23] In 2005, the Polish Foreign Minister Adam Daniel Rotfeld suggested that there are instances of "bad will, saying that under the pretext that “it’s only a geographic reference”, attempts are made to distort history and conceal the truth."[18][24] Adding adjective "Polish" when referring to concentration camps or ghettos located in occupied Poland, or to the world Holocaust in general, can suggest, often unintentionally and always counter factually, that the atrocities in question were perpetrated by the Poles, or that the Poles were active participants in the Nazi rule of Poland during World War II.[18][24]

In 2008, due to the continued usage of the term term Polish in regards to atrocities committed and camps built and operated by the German state under Nazi leadership, the chairman of the Polish Institute of National Remembrance (IPN) issued a letter to local administrations with a call to add German before Nazi in all monuments and tables that commemorate the victims of Nazi Germany.[25] As stated by the IPN official, while in Poland 'Nazi' is definitely connected to 'German' this is not the case everywhere in the world, and the change will help avoid any misinterpretation that the responsibility for the crimes against humanity committed in war-torn Poland wasn't specifically German.[25] At the time several places of martyrology underwent renovations, and the new plaques were to clearly indicate the nationality of the people responsible for atrocities. Additionally, IPN requested to better document and commemorate the crimes perpertated by the Soviet Union as well.[25]

The American Jewish Committee has also rejected the usage, stating that:

Auschwitz-Birkenau and the other death camps, including Belzec, Chelmno, Majdanek, Sobibor and Treblinka, were conceived, built and operated by Nazi Germany and its allies. The camps were located in German-occupied Poland, the European country with by far the largest Jewish population, but they were most emphatically not "Polish camps". This is not a mere semantic matter. Historical integrity and accuracy hang in the balance.[26]

The government of Israel has also deprecated the usage of this phrase.[27] Concerns about the use of the term Polish death camp led the Polish government to request that UNESCO change the official name of Auschwitz from "Auschwitz Concentration Camp" to "former Nazi German concentration camp Auschwitz-Birkenau" in order to make clearer that the concentration camp was built and operated by Nazi Germany.[28][29][30][31] On 28 June 2007 at its meeting in Christchurch, New Zealand, the World Heritage Committee of UNESCO changed the name of the camp to "Auschwitz Birkenau. German Nazi Concentration and Extermination Camp (1940-1945)."[32][33] Previously, some media, including Der Spiegel in Germany, had called the camp "Polish".[34][35] The New York Times regularly refers to Auschwitz as Polish rather than German.[36]

An example of the controversy occurred when an April 30, 2004 CTV News report made reference to "the Polish camp in Treblinka". The Polish embassy in Canada lodged a complaint with CTV. Robert Hurst of CTV, however, argued that the term "Polish" was used throughout North America in a geographical sense, and declined to issue a correction.[37] The Polish Ambassador to Ottawa then complained to the National Specialty Services Panel of the Canadian Broadcast Standards Council. The Council did not accept Hurst's argument and ruled that the word "'Polish'—similarly to such adjectives as 'English', 'French' and 'German'—had connotations that clearly extended beyond geographic context. Its use with reference to Nazi extermination camps was misleading and improper".[19]

Polish newspaper Rzeczpospolita has criticized international media outlets, including Haaretz from Israel, as "holocaust deniers" over usage of the term. However, all foreign media articles so criticized by Rzeczpospolita (as of November 2008) make clear that the perpetrators were German, and none claim Poles built the camps.[38]

On December 23, 2009, writing in The Guardian, Timothy Garton Ash said:

Watching a German television news report on the trial of John Demjanjuk a few weeks ago, I was amazed to hear the announcer describe him as a guard in "the Polish extermination camp Sobibor". What times are these, when one of the main German TV channels thinks it can describe Nazi camps as "Polish"? In my experience, the automatic equation of Poland with Catholicism, nationalism and antisemitism – and thence a slide to guilt by association with the Holocaust – is still widespread. This collective stereotyping does no justice to the historical record.[40]

In 2009 Zbigniew Osewski, grandson of a Stutthof prisoner, announced he was suing Axel Springer AG for calling Majdanek a 'former Polish concentration camp' in article from November 2008 published in German press "Die Welt".[41] The case started in 2012.[42] In 2010, The Polish-American Kosciuszko Foundation launched a petition demanding that four major U.S. news organizations endorse the use of the term “German concentration camps in Nazi-occupied Poland”.[43][44]

"Globe and Mail" informed on September 23, 2011 about “Polish concentration camps”. Canadian MP Ted Opitz and Minister of Citizenship Jason Kenney supported Polish protests.[45] In May 2012, U.S. President Barack Obama referred to "a Polish death camp" while posthumously awarding the Presidential Medal of Freedom to Jan Karski. After complaints from Poles, including Polish Foreign Minister Radosław Sikorski and Alex Storozynski, president of the Kosciuszko Foundation, a representative of the Obama administration said the President misspoke and "was referring to Nazi death camps in German-occupied Poland."[46][47]

In 2013, Karol Tendera who was a prisoner at Auschwitz-Birkenau, and is the secretary of the association of former prisoners of German concentration camps, has sued the German television network ZDF, demanding formal apology and 50,000 PLN to be donated for charitable causes for the use of the expression <<"Polish" concentration camps>>.[48]