The .17 Remington Fireball was created in 2007 by Remington Arms Company as a response to the popular wildcat round, the .17 Mach IV. Factory loads drive a 20 grain (1.3 g) bullet around 4,000 ft/s (1,219 m/s). Velocity is close to the .17 Remington but with significantly less powder, and therefore less heat and fouling. Both are important issues to high-volume shooters such as varmint hunters.

It's based on the .221 Remington Fireball necked down to accept a .17 caliber bullet and is very similar to the .17 Mach IV. Reports on this cartridge show mild recoil, high velocity, with minimal report (noise).[2]

.17 Remington cartridge next to a .221 Remington Fireball cartridge, its parent case. 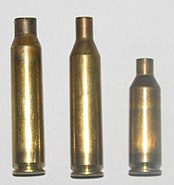 Retrieved from "https://military.wikia.org/wiki/.17_Remington_Fireball?oldid=4105452"
Community content is available under CC-BY-SA unless otherwise noted.