Although very similar to the military 7.62×51mm NATO specifications, the .308 cartridge is not identical, and there are special considerations that may apply when mixing these cartridges with 7.62×51mm NATO, and .308 Winchester chambered arms.[5] Their interchange is, however, considered safe by the Sporting Arms and Ammunition Manufacturers Institute (SAAMI).[6]

The .308 Winchester has 3.64 ml (56.0 grains) cartridge case capacity.[7] The exterior shape of the case was designed to promote reliable case feeding and extraction in bolt action rifles and machine guns alike, under extreme conditions. 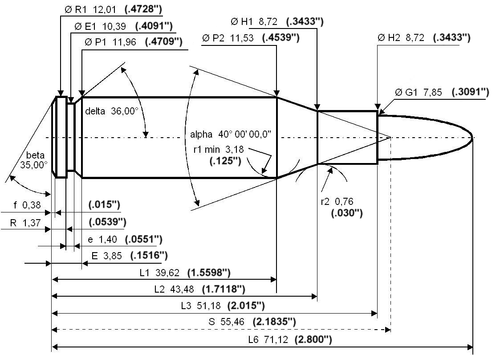 According to the official C.I.P. (Commission Internationale Permanente pour l'Epreuve des Armes à Feu Portatives) rulings the .308 Winchester can handle up to 415.00 MPa (60,191 psi) Pmax piezo pressure. In C.I.P. regulated countries every rifle cartridge combo has to be proofed at 125% of this maximum C.I.P. pressure to certify for sale to consumers. This means that .308 Winchester chambered arms in C.I.P. regulated countries are currently (2008) proof tested at 519.00 MPa (75,275 psi) PE piezo pressure.[9]

The .308 Winchester is one of the most successful hunting cartridges in the United States, and possibly the world. It has gained popularity in many countries as an exceptional cartridge for game in the medium- to large-sized class.[10] In North America it is used extensively on whitetail deer, pronghorn and even the occasional caribou or black bear.

Clay Harvey, an American gun writer, says it is usable on moose and elk.[11] Layne Simpson, an American who has hunted in Sweden, says he is surprised how many hunters there use the cartridge.[12] Craig Boddington was told by a Norma Precision executive that the .308 is one of Norma's best-selling calibers.[13]

In Africa the .308 Win is one of the most popular calibers among Bushveld hunters and is used on anything from duiker right up to the massive eland (a small and large African antelope respectively). Proponents of the hydrostatic shock theory contend that the .308 Winchester has sufficient energy to impart hydrostatic shock to living targets when rapidly expanding bullets deliver a high rate of energy transfer.[2][4][14][15] 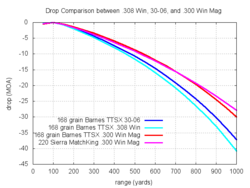 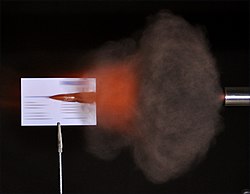 Ultra-high speed photo of a 150 grain FMJ .308 Winchester bullet photographed with an air-gap flash.
Add a photo to this gallery

As a parent case[edit | edit source]

Sectional Density vs Ballistic Coefficient.
Add a photo to this gallery

Retrieved from "https://military.wikia.org/wiki/.308_Winchester?oldid=5343339"
Community content is available under CC-BY-SA unless otherwise noted.