10 Para's primary role is to be the nation's main offensive force in time of war or emergencies. The creation of the Parachute Brigade was proposed by Malaysia's defence planners in the late 1970s as a part of the modernisation plan for the military. The plan originally did not receive much support from the government due to concerns that the formation of such a brigade would be looked with suspicion by its neighbour, Singapore.

In November 1988, Malaysia was unable to respond to a request for assistance by Maldives when that country was invaded by Tamil mercenaries. This inability to render timely help prompted Malaysian leaders to move to form paratrooper units within the Malaysian Army.

10 Parachute Brigade is highly skilled in accordance with its status as a Rapid Deployment Force. The paratroopers are vigorously trained for specialised combat operations and rapid deployment in alignment with the brigade's motto Tindak Pantas (English: Act Fast). The 10 Para can be deployed from land, air and sea.

The maroon beret worn by the 10 Parachute Brigade is known as 'Pegasus'. The conditions for wearing the maroon beret are to pass the basic parachute course and to APAC course. This is an imitation of the British Parachute Regiment, as is the way the beret is worn and the cap badge. Much of their training is based on the British paras due to their reputation of being the best airborne force in the world.

For 10 Para members, the parachute wings are titled Sayap Berdarah meaning 'The Bleeding Wings'. During graduation ceremony, VIPs (usually the Chief of Army or the Commander of 10 Para) or instructors will punch the metal parachute wing into graduates' chest. The sharp pins from the wing will make graduates bleed with their wings.

This tab is only worn by the members of 10 Para on their left shoulder both at service dress uniform and battledress. The tab is in maroon colour and embroidered with black letters 'PAC' which an acronym for Pasukan Aturgerak Cepat.

This tab is worn by any soldiers who passed the Basic Parachute Course held by the PULPAK. The tab is similar to the US Army 101st Airborne Division tab; yellow/gold 'AIRBORNE' letters embroidered on black background, and worn on the right shoulder of the service dress uniform. The black and olive version is worn at the Combat uniform.

10 Parachute Brigade is based at Terendak Camp, Malacca, also known as 'Home of the Paras'.

The brigade consists of:

This warm up sessions is last for two weeks. The candidates are prepared physically and mentally for the actual course. Candidates need to run 2.5 km (1.6 mi) twice a day at 0700 hrs and 1500 hrs.

Members of the brigade must pass a Kursus Asas Payung Terjun ('Basic Parachute Course') and Kursus Asas Pasukan Aturgerak Cepat (APAC; 'Basic Rapid Deployment Force Course') before being qualified to wear the maroon beret and parachute wing.[5] This course is conducted at PULPAK, Sungai Udang Camp, Malacca. This course is compulsory for a non-combat soldier (doctors, nurses, chefs, religions officers, intelligence, etc.) to be attached to the 10 Para.[6]

This course is divided into three phases:[7]

The first phase lasts for two weeks. Candidates are taught the correct techniques, how to land, emergency procedures if the main chute did not deploy or did not open correctly, emergency procedures if a collision happens in the air, how to deploy the second chute, discipline in the aircraft, landing techniques in difficult conditions (rough wind, water etc.) and the correct technique to pack the parachute after landing.

Every Friday, candidates need to pass these physical tests:

Lasts for one week, the theories learnt in phase 1 is tested at high tower. Each candidate needs to carry 40 kg (88 lb) of equipment for each exercise. The exercises are:

This is the final phase of the Basic Parachute Course. Non-PAC candidates are given their parachute wings right after performing the last jump while the PAC candidates move to the next course. In jump week, candidates are sent to selected airport. The airport and drop zones are not fixed. Some of the known drop zones are Gong Kedak, Kelantan, Padang Terap, Kedah and Pontian, Johor.

Compulsory jump is eight jumps with at least two jumps in full battle equipment. However, there are a few cases in which only seven jumps are needed if the weather conditions did not permit.[7]

Known as Kursus Asas Pasukan Aturgerak Cepat (APAC) in Malay language, this rigorous course is conducted at Perkampungan Gempita Para ('Para Combat Village'), Terendak Camp, Malacca. The purpose of this course is to mentally and physically train the paratroopers to elite status, applying esprit de corps and emphasise the 'Buddy System' among themselves. Also known as Latihan Semangat Waja, this course is divided into two phases.[8]

Physical training/test they need to endure:

In this phase, trainees are trained with basic 10 Para tasks and they will be tested to perform the task under stress. Among the training is:

The final training is conducted at Parawood, Terendak Camp. Trainees need to swim c.100 m (330 ft) in murky water with weapon and equipment before been bestowed with the maroon beret and the bleeding wing. The ceremony ends with the para oath and para dance by the graduates.

The career with 10 Para does not stop once they receive the maroon beret. The 10 Para members can proceed to the next level of training by participating in any advance course offered to them by the Malaysian Armed Forces. They can also try to join the 10 Para's Special Forces Equivalent Unit, the Pandura Company ('Pathfinder'). Some of the paratroopers of 10 Para entered the Basic Commando Course.[9]

Some of the Advanced/Specialist training includes: 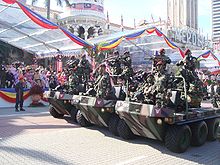 10 Para with ATMP (All Terrain Mobility Platform) during a parade. 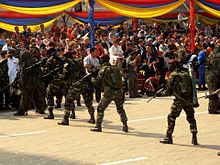 Paratroopers of 10 Para demonstrate specialised combat operations during the National Day Parade of 2013 at National Square, Kuala Lumpur, Malaysia. Two of them have slung HK MP5SD2s while sniper personnels has a slung Colt M4A1 Carbine.

An paratrooper of 10 Para with Colt M4A1 with M203 grenade launcher and Aimpoint Micro-T1 red dot sight standby for demonstration of specialised combat operations during the National Day Parade of 2013 at National Square, Kuala Lumpur, Malaysia.

Paratrooper from 10 Para of Malaysian Army holding his M4A1 Carbine during the 59th Merdeka Day in Kuala Lumpur.

The unit has been deployed in the following operations:

On 14 October 2005, The Malaysian Medical Team (MasMedTim) soldiers serving in earthquake-hit Battagram, Pakistan have been recommended for a service allowance of RM100 a day. The team, which left for Pakistan had set up a field hospital in Battagram, some 250 km from Islamabad, on 26 October. Equipped only with tents that were more suitable for the tropics and kerosene heaters, MasMedTim soldiers had to battle subzero temperatures while carrying out their duties of providing aid to survivors of 8 October South Asia earthquake. Insufficient winter clothes and the lack of hot water at the campsite was affecting soldiers for over two months now as the temperature sometimes dropped to minus 7 degrees Celsius (-7 °C) at night.[15]

The security surveillance, code-named Operation Padanan Sipadan Island Resort or known as Ops Pasir, which was launched on 20 September 2000 following the hostage-taking incidents in Sipadan and Pandanan islands, had restored confidence among tourists, including from the United States, to come to the resort islands. The integrated operation involves the Malaysian army, navy and air force as well as other related agencies such as the police and the coast guard.[16]

As the second most prestige beret in the Malaysian Army; only after the green beret of the Grup Gerak Khas, the maroon beret of 10 Para is honorarily awarded to the high ranking individuals, military or government high ranking and foreign VIPs.[17] In Malaysia, the honorary beret is part of the official military attires.

Among the recipients is:

Retrieved from "https://military.wikia.org/wiki/10th_Parachute_Brigade_(Malaysia)?oldid=4654866"
Community content is available under CC-BY-SA unless otherwise noted.