The mission of the 15th Strike Wing is to conduct tactical air operations in support of Armed Forces of the Philippines units. The unit is headquartered at Danilo Atienza Air Base, Sangley Point, Cavite, just outside the capital Manila. The Wing, as of 2009, was organized with Personal, Coordinating and Technical Staff. Under the Wing's command were units broken up into 3 major groups: Tactical, Maintenance and Supply, and Air Base. The Wing's tactical elements included the 16th, 17th, 18th, and 20th Attack Squadrons and the 25th Composite Attack Squadron. Many of these units were forward deployed under the operational control of the Philippine Air Force's numerous Tactical Operations Groups. The 460th Maintenance and Supply Group and the 590th Air Base Group filled the other roles.[1]

The 15th Strike Wing was organized and activated as a provisional unit on 26 November 1973, at Sangley Point, Cavite City, with a mission statement: To conduct counter-insurgency and special warfare operations. The appointed Acting Wing Commander then was Colonel Emerito P Surio PAF (GSC), with Colonel Pompeyo P Vasquez PAF (GSC), the Deputy Commander, and a complement of two officers and ten airmen. Initially, the Wing had six (6) T-34 Mentors and six (6) T-28 Trojans, mostly from 100th Training Wing and 5th Fighter Wing. Ten (10) airmen were sent to the 410th Air Materiel Wing to undergo maintenance on-the-job training (OJT), in February 1974. Then, additional personnel were reassigned to the Wing such that, by the end of the year, the unit had 27 officers and 288 airmen, who became the nucleus of 15th Strike Wing.[2]

On 1 July 1974, the 18th Maintenance and Supply Squadron (forerunner of 461st Field Maintenance Squadron), was activated and manned under the leadership of Major Salvador Cereno PAF. A month later, 16th Attack Squadron was organized in anticipation of the delivery of T-28D aircraft from Vietnam. This unit was activated and manned on 1 August 1974, with LT Colonel Santiago O Pitpitan JR PAF as Squadron Commander. Following this, the 17th Attack Squadron was activated on 1 October 1974 and was projected to man the SIAI-FRAT-260 Warriors (SF-260W). However, for several months after the unit's activation, the squadron only manned one (1) T-34A Mentor. The first batch of the Italian-made, locally assembled SF-260W Marchetti aircraft, arrived in late February 1975.

On 16 October 1974, the fearless 302nd Special Operations Squadron of HPAF was placed under the command and control of the 15th Strike Wing Commander. Two days later, the Wing received the first batch of T-28D aircraft, fresh from the Vietnam War. Trained under Captain Hamilton of the US Air Force and eventually checked out as instructor pilots were: COL Barroga, LT COL PITPITAN JR, LT COL SAMSON, LT COL DAVID and MAJ Billones. These pilots made a smooth transition to the T-28D, bringing forth a new generation of PAF pilots – THE ATTACK PILOTS. Conceptualized mainly to fight insurgency in the country, this new breed of pilots has come to specialize in Close Air Support and Air Interdiction against the enemies of the state.

With the acquisition of additional T-28D aircraft from Udorn AFB in Thailand, another unit, the 25th Attack Squadron, was activated on 29 March 1976. It was given the task to provide Close Air Support to ground and naval forces in the newly organized Western Command, which was then under the concurrent command of the 15th Strike Wing Commander. LT COL TERESO J ISLETA first commanded the 25th Attack Squadron with 71 officers and 36 enlisted personnel. On 13 April of that year, three (3) aircraft of the 15th Strike Wing landed at Puerto Princesa. Following this, they also made a historic landing at Kalayaan.

In May 1976, the Grumman HU-16 Albatross was transferred to 15th Strike Wing from 530th Air Base Group in Zamboanga and was employed as a search and rescue aircraft, thus giving birth to 27th Search, Rescue and Reconnaissance Squadron. Armed with rockets, the Grumann HU-16 Albatross was utilized as Forward Air Controller and SAR aircraft with limited close air support capability. The Wing also had the C-47 Gooney Bird, which was used to ferry personnel, supplies and equipment, and performed other expeditious missions to ensure rapid deployment effectiveness of 15th Strike Wing.

Towards the end of the Seventies, the oil prices doubled, thus resulting to decrease in flying operations. A crippling shortage of spares was felt in 1979, and a drastic reorganization move was put in place to increase the operational rate of the assigned aircraft. A provisional unit was then established to consolidate all support units. This was the 20th Combat Support Group headed by LT COL NORBERTO P FERRERAS, who was also the Wing's Chief of Maintenance.

For the 15th Strike Wing, the 80's also ushered in major changes. In anticipation of the AUH-76's arrival, the 20th Air Commando Squadron was activated on 1 October 1983. In 1984, PRESIDENT FERDINAND E MARCOS facilitated the acquisition of Sikorsky AUH-76 helicopters, which the Philippine Air Force configured as a platform for rockets and machine guns, from its original design as a VIP passenger aircraft. Two (2) S-70A Blackhawks also arrived together with the three AUH-76. Two of the AUH-76 helicopters were configured as rescue helicopters, thus placing the 505th Air Rescue Squadron of the 205th Helicopter Wing under 15th Strike Wing control, on 1 April 1984. As an attack helicopter, the AUH-76 saw action not only in Mindanao but also in the Visayas and Northern Luzon as well.

Preceding the arrival of the AUH-76 was the transfer of the SF-260s, during the early part of 1983, to 100th Training Wing. Consequently, the 25th Attack Squadron was unmanned on 1 October 1983.

With the political tension that pervaded the country after the assassination of Benigno Aquino Jr., economic instability spelled budgetary cuts for the government. Maintenance cost increased while some pilots opted to leave the service to seek for “greener pastures.” Because of this drain in personnel and equipment, the 17th Attack Squadron was unmanned on 1 August 1985, leaving the 16th Attack Squadron as the only tactical squadron under 15th Strike Wing.

The finest hour of the 15th Strike Wing came during the 1986 EDSA People Power Revolution. The Wing Commander, then COLONEL ANTONIO E SOTELO, led a flight of Sikorsky gun ships to join forces with rebel forces at Camp Crame. The “Sotelo Landing” tilted the balance in favor of the Enrile-Ramos faction and inspired other military commanders as well. This eventually led to the end of the 20-year Marcos Regime. Following this, Corazon Aquino, the widow of Benigno Aquino Jr., assumed as President of the Republic. Consequently, the military enjoyed renewed respect and confidence from the populace.

The high regard for the military deteriorated as coup d’ etats plagued the Aquino Administration. Sangley Point was not spared. In January 1987, Marcos loyalists simultaneously held a so-called “Military Exercise” at Villamor Air Base and Sangley Air Base. The purpose of the coup attempt was to grab the leadership of the command in support of a plan to overthrow the Aquino Administration. Several officers of the Wing were held at gunpoint at the Wing Operations Center or were held hostage elsewhere. However, the coup attempt was not successful because majority of the officers and men of the Wing remained loyal to the constitution. Before the end of the day, command and control of the Wing had been restored.

On 28 August 1987, another attempt to overthrow the Aquino Government was mounted. Again, 15th Strike Wing stood its ground to protect our national interests and integrity. At the height of the tension, at the time when rebel forces had control over TV 13 and GHQ building, two T-28Ds took off from Sangley Point and proceeded to Balara Relay Station and released deadly warnings at the vicinity of the area occupied by rebel soldiers. Then, later in the afternoon, the Tora-Toras struck with precision identified targets at Camp Aguinaldo. These events eventually led the rebels to raise the white flag, thus ending the coup attempt.

In December 1989, 15th Strike Wing was one of the focal points of another coup attempt, which turned out to be the bloodiest. On 30 November 1989, coup plotters began occupying the Sangley Air Base, which was considered as their ace. By midnight, all aircraft were already under the control of the rebel soldiers. Other base facilities and vital installations also fell into their hands. By early morning of December 1, rebel pilots were already set to launch air strikes. In the first seven days of December, T-28Ds piloted by rebel pilots strafed Malacañang Palace grounds; they were in control of the skies.

With Sangley Air Base under their control, the rebels had the upper hand. The government, on the other hand, realized the implications of this situation; so, 5th Fighter Wing was tasked to conduct persuasion flights. By the following morning, a flight of F-5 Freedom Fighters led by MAJOR DANILO S ATIENZA, performed a persuasion flight over Sangley Air Base. But because the rebels were firm on holding their ground, the F-5 pilots were later directed to retake Sangley at all costs. And so air strikes were conducted, inflicting heavy damage on aircraft and facilities controlled by the enemy. Unfortunately, Major Atienza crashed after flames from the explosion of a fuel depot engulfed his F-5, killing him in the process. More than two years later, on 5 May 1992, the airfield of Sangley was renamed Major Danilo S Atienza Airfield pursuant to Republic Act 7429 in recognition of his gallantry and intrepidity.

The most drastic change in Sangley was the merging of the 240th Composite Wing and the 15th Strike Wing, in 1987. The 240th Composite Wing was unmanned on 16 January 1987; subsequently, on 24 February 1987, Sangley Air Base was recognized as a single-wing base. 15th Strike Wing then absorbed 240th CW and, from then on, functioned both as a tactical unit and as a base keeper of Sangley Air Base. Due to the increase in manpower and equipment that was brought upon by the merging of the two units, the 505th Air Rescue Squadron was transferred to the 205th Helicopter Wing on 16 July 1987.

Changes occurred in 15th Strike Wing even towards the end of the decade. On 15 July 1990, 17th Air Commando Squadron and the 25th Air Commando Training Squadron were re-manned. The 601st Liaison Squadron, the only squadron from the 240th CW to have survived the merger with 15th SW, was unmanned on the same date.

This development proved to be timely because, just a few months after the squadron's reactivation, the “new” Jaguars flew and unleashed an overwhelming display of air power against the Misuari Renegade Group in Zamboanga City, on 27 November 2001. This baptism of fire marked the resurgence of the Jaguars as a formidable and decisive force in the government's campaign against insurgency.

To further reinforce the “fighting power” of the Philippine Air Force in the south, LTGEN JOSE L REYES AFP CGPAF, then Wing Commander of the 15th Strike Wing, thought of waking up the sleeping fox and transform it as a keen guardian of Mindanao. Thus, on 19 July 2004, the 25th Attack Squadron popularly known as the “LOBOS”, was re-manned into 25th Composite Attack Squadron based at 3rd Tactical Operations Wing, Edwin Andrews Air Base, Zamboanga City. This unit is envisioned to manage, operate and maintain the Wing's assets in Mindanao such as the OV-10 Bronco, MD-520 MG and SF-260 TP aircraft. Thirty-four (34) able officers and enlisted personnel composed the newly re-manned 25th CAS, called to professionalism and dedication to guard the nation's peace and sovereignty against lawless elements down south.

Through the years, the 15th Strike Wing has evolved in response to the changing needs of our times but it has consistently given and delivered the best service there is; anytime and anywhere across the archipelago.

To effectively perform its function, the Wing is organized in the line and staff structure with Personal, Coordinating and Technical Staff. Under the Command and control of the Wing Commander are three (3) Major Groups. Namely; Tactical Group, Maintenance and Supply Group and Air Base Group.[3] 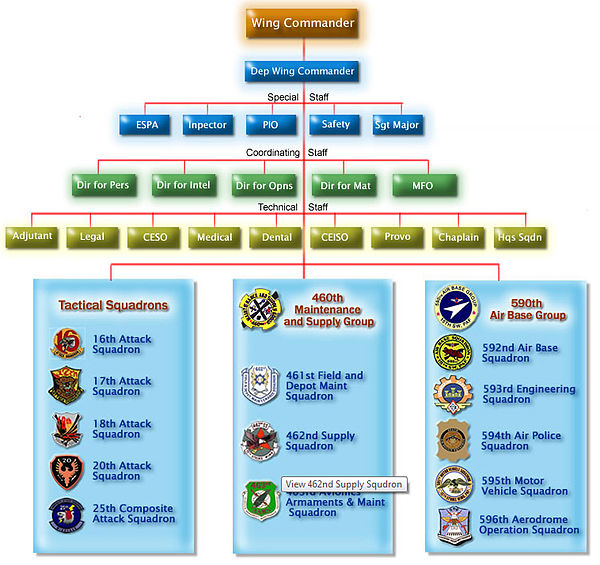 Retrieved from "https://military.wikia.org/wiki/15th_Strike_Wing,_Philippine_Air_Force?oldid=4681103"
Community content is available under CC-BY-SA unless otherwise noted.