Military Wiki
Register
Don't have an account?
Sign In
Advertisement
in: Articles with ibid from June 2014, Articles incorporating text from Wikipedia, Military units and formations of the United States Air National Guard,
and 2 more

The mission of the 280th Combat Communications Squadron is to provide communications and information systems for Command and Control of United States Special Operations Forces worldwide, as well as respond to State emergencies as directed by the Governor.[5]

On a blue disc. Issuing from lower left a yellow demisphere grid lined black and a yellow satellite in lower left emitting two red dash lines to the sphere; above the sphere and satellite a gray eagle with wings displayed throughout detailed black olive branches with white berries in his left claw; all within a narrow yellow border.

Blue and yellow are the Air Force colors. Blue alludes to the sky, the primary theater of Air Force operations. Yellow refers to the sun and the excellence required of Air Force personnel. The globe represents the worldwide scope of mobility. The eagle symbolizes strength and keenness of vision. The lightning flashes and olive branches refer to the unit’s motto, COMMUNICATIONS FOR PEACE. The satellite reflects the high technology required of the unit in order to perform its mission.[5] 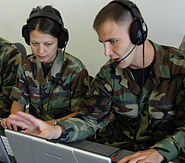 280th CBCS members working on a Joint Base Station setup