2nd Battalion, 153rd Infantry Regiment (United States) is a United States infantry battalion, headquartered at Searcy, Arkansas, assigned to the 39th Infantry Brigade Combat Team of the Arkansas Army National Guard.[1] During World War II, the battalion was stationed in the Aleutian Islands. Following the attacks of 11 September 2001, the 2–153rd Infantry, nicknamed the "Gunslingers", deployed to the Sinai on a peace keeping mission in order to free regular army soldiers for service elsewhere. The soldiers of the 2–153rd deployed under the flag of the 3rd Battalion, 153rd Infantry during Operation Iraqi Freedom II. The battalion provided disaster relief operations to the citizens of Louisiana in the aftermath of Hurricane Katrina. The Gunslingers were deployed to Iraq a second time in 2008 as a security forces battalion and conducted convoy security operations in western Iraq.

In 1994 the 39th was again reorganized and gained its designation as an "Enhanced" brigade. In 1999, the 39th became part of the 7th Infantry Division under the Army Integrated Division concept which paired National Guard and Reserve brigades with active duty headquarters and support units.[2]

In 2006 the 39th Brigade was reorganized as a Brigade Combat Team under the United States Army's new modular design concept.

Company B, 2nd Battalion, 153 Infantry, and Company B, 3rd Battalion, 153rd Infantry of the 39th BCT were activated for Operation Southern Watch, May through September 1999.[4] B/2-153 deployed to Kuwait and provided security at Patriot Missile Batteries during these deployments. The mission lasted a total of seven months, and was the first "pure" National Guard effort in the region. Company C, 1st Battalion, 153rd Infantry carried on the 39th's role in Operation Southern Watch when they replaced Company B, 2-153rd in September 1999.[5]

On 10 October 2001, 2–153 IN "Gunslinger" was activated in support of the Global War on Terror.[6] Second Battalion was sent to Egypt in order to take over the Multinational Force and Observers mission, freeing up regular army infantry units to deploy to Afghanistan.

The 2-153's mission during the MFO was: "...to supervise the implementation of the security provisions of the Egyptian-Israeli Treaty of Peace and employ best efforts to prevent any violation of its terms." This mission was accomplished by carrying out four tasks: Operating checkpoints, observation posts and conducting reconnaissance patrols on the international border as well as within Zone C; verification of the terms of the peace treaty not less than twice a month; verification of the terms of the peace treaty within forty eight hours, upon the request of either party, and ensuring freedom of international marine navigation in the Strait of Tiran and access to the Gulf of Aqaba. This was the first "pure" National Guard takeover of the MFO mission. 2-153rd deactivated on 11 October 2002.

In 2002 the 39th Brigade was notified that it would be participating in a rotation to the Joint Readiness Training Center (JRTC) at Fort Polk, LA. For National Guard units, a rotation to JRTC is a three year process that provides additional money, resources and training opportunities in order to improve unit readiness before the actual rotation through the JRTC. The battalion was required to complete a Mission Rehearsal Exercise during the Annual Training 2003 which was conducted at Fort Chaffee, Arkansas. Less than a month after the completion of this major training milestone, the 39th Brigade received its alert for deployment to Iraq in support of Operation Iraqi Freedom on 28 July 2003.

Because of the 2002 deployment of the 2–153rd to the MFO, the battalion was deemed non-deployable as an organization; however the soldiers of the battalion were to deploy. The decision was made by Brigadier General Chastain to transfer the battalion commander and staff from 2–153rd to 3–153rd. The 3-153rd commander and staff were transferred to the 2–153rd and were designated to function as the brigade's rear detachment during OIF II. This transfer lead to the 3-153rd often being referred to as the "Two Thirds Battalion". 3–153rd adopted the 2–153rd nickname and call sign, "Gunslingers" for OIF II. During consolidation of the 1st, 2nd and 3rd Battalions, 153rd Infantry regiment for OIF II, efforts were made to maintain unit integrity at least the platoon level. The units were consolidated in the following fashion.[7]

While the 2nd Battalion, did not officially deploy for OIF II, its soldiers did. For a history of their accomplishments, see the articles on 1-153rd IN and 3-153rd IN.

Upon redeployment in 2005, the 39th Brigade immediately began a major reorganization that transformed the brigade from an Enhanced Separate Brigade (eSB) to an Infantry Brigade Combat Team (IBCT) under the United States Army's new Modular Design. This redesign of the army was intended to make the force more easily deployable by making brigades more self-contained and less dependent on support organizations at the division level. Major changes for the 2nd Battalion, 153rd Infantry included the activation of a Forward Support Company, Company F, 39th BSB. Along with this reorganization came a significant re-stationing of several units within the state of Arkansas.

After Hurricane Katrina hit Louisiana in August 2005, members of the 2nd Battalion, 153rd Infantry were deployed to New Orleans by C-130s from the Little Rock Air Force Base to support the relief and recovery efforts there.[8] Under tactical control of the Louisiana National Guard, 2–153rd soldiers were given the mission of providing security and food and water to the citizens of Louisiana. Members of the 2–153rd IN and the 39th IBCT remained deployed in Louisiana until February 2006.

In June 2006 the 39th Brigade began deploying troops along the Southwest Border with Mexico as part of Operation Jump Start. The brigade manned two sectors of the border around Lordsburg, New Mexico and near Deming, New Mexico. Unit members occupied Observation Posts and reported activity along the border the United States Border Patrol.[9] Various battalions within the 39th Brigade were tasked with supplying volunteer companies during this period. While serving in Operation Jump Start members of the battalion were able to begin preparing for the 39th Brigade's second deployment in support of Operation Iraqi Freedom. It is ironic that the 1st Arkansas Infantry, the parent unit of the 153rd Infantry Regiment was stationed in these same areas of New Mexico ninety years earlier during General "Black Jack" Pershing's punitive Mexican Expedition against Pancho Villa.

The 2nd Battalion, 153rd Infantry received an alert for a deployment in support of Operation Iraqi Freedom in April 2007.[10] Members of the battalion had been home almost exactly two years since demobilizing after OIF II. This deployment would be dramatically different from the batttalion's first deployment to OIF. Instead of deploying as an infantry battalion, the 2–153rd was tasked with filling six Unit Requests for Forces (URFs). These taskings involved supplying Convoy Security Companies to escort logistical convoys in Iraq.[11] Additionally, Instead of an eighteen month mobilization, with twelve months actually deployed to Iraq like the first tour, this mobilization would be for a total of twelve months, with approximately ten months being deployed to the combat theater. The 2–153rd was placed on duty in October 2007 to prepare for its deployment to Iraq while still under state control. It began a ninety day pre-mobilization training period at Chaffee Maneuver Training Center (CMTC) on 1 October 2007.[12] This allowed the unit to perform certain tasks in Arkansas and allowed unit members to be closer to their families for a longer period of time. The battalion was placed in federal service in January 2008 and trained at Camp Shelby, Mississippi until it deployed beginning in March 2008 to Iraq. Upon reaching its final destinations, the 2–153rd fell under the Tactical Command (TACON) of Regular Army units, primarily the 13th Sustainment Command (Expeditionary). The 39th IBCT retained Administrative Command (ADCON) of all brigade elements. 2–153rd was stationed in Al Asad Airbase, Iraq and was organized as a Convoy Security Battalion. The battalion provided convoy security to Theater Sustainment Convoys using the Jordan Line of Communications from Trebil to Al Asad and Forward Operating Base TQ. The unit conducted seventy six, Combat Logistical Patrols, each lasting four to six days, while driving over 1,587,000 miles. 2–153rd experience one casualty during OIF 07-08 when an escort vehicle was accidentally struck while providing security at an intersection by one of the escorted vehicles.

The 2–153rd redeployed to Camp Shelby, Mississippi in December 2008 and demobilized. 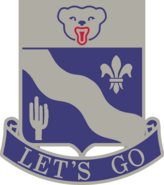 A silver color metal and enamel device 1 1⁄8 inches (2.9 cm) in height overall consisting of a shield blazoned: Azure, a bend wavy between a fleur-de-lis and a giant cactus Argent; on a chief of the last a Great Bear's face of the like fimbriated of the first, lips and tongue Gules. Attached below the shield is a blue motto scroll inscribed "LET'S GO" in silver letters.[17] Symbolism: The shield is blue for Infantry. The wavy bend, representing the Arkansas River, refers to the geographic location of the regiment. The cactus symbolizes service on the Mexican border and the fleur-de-lis service in France during World War I. The Great Bear's face from the shoulder sleeve insignia of the Alaskan Department symbolizes service in that area in World War II.[17] Background: The distinctive unit insignia was originally approved for the 153d Regiment infantry on 6 January 1930. It was amended on 30 June 1930. On 4 June 1951 the insignia was amended to show additional war service.[17]

Blazon: Shield: Azure, a bend wavy between a fleur-de-lis and a giant cactus Argent; on a chief of the last a Great Bear's face of the like fimbriated of the first, lips and tongue Gules.[17]

Crest: That for the regiments of the Arkansas National Guard: On a wreath of the colors (Argent and Azure) above two sprays of apple blossoms Proper a diamond Argent charged with four mullets Azure, one in upper point and three in lower, within a bordure of the last bearing twenty-five mullets of the second.[17]

Symbolism: The shield is blue for Infantry. The wavy bend, representing the Arkansas River, refers to the geographic location of the regiment. The cactus symbolizes service on the Mexican border and the fleur-de-lis service in France during World War I. The Great Bear's face from the shoulder sleeve insignia of the Alaskan Department symbolizes service in that area in World War II.[17]

Background: The coat of arms was originally approved for the 153d Regiment Infantry on 6 January 1930. It was amended on 4 June 1951 to show additional war service.[17]

Retrieved from "https://military.wikia.org/wiki/2nd_Battalion,_153rd_Infantry_Regiment_(United_States)?oldid=4682414"
Community content is available under CC-BY-SA unless otherwise noted.