The 335th Fighter Squadron (335 FS) is a United States Air Force unit. It is assigned to the 4th Operations Group and stationed at Seymour Johnson Air Force Base, North Carolina.

The 335th was constituted on 22 August 1942 as an incorporation of the No. 121 (Eagle) Squadron of the Royal Air Force, formed on 14 May 1941 as the second of three Eagle Squadrons of the Royal Air Force. These squadrons were composed of American volunteers, recruited by the RAF as a result of the heavy loss of pilots during the Battle of Britain in 1940; the volunteers were ineligible to join the USAAF. In this capacity, the squadron operated Supermarine Spitfires and Hawker Hurricanes.

Its current emblem contains the head of an American Indian chief, which dates back to the original emblem of 121 Squadron RAF.

The "Chiefs" fly the McDonnell-Douglas (now Boeing) F-15E Strike Eagle. The squadron has an authorized strength of 24 aircraft and around 65 personnel. Its aircraft are identified by the "SJ" tail code and green fin flash.

Currently the squadron provides worldwide deployable aircraft and personnel capable of executing combat missions in support of worldwide Aerospace Expeditionary Force deployments to combat areas as part of the Global War on Terrorism.

The 335th is known as the "World's Leading MiG Killers" for destroying 218.5 MiGs in aerial combat.

In 1942, the Royal Air Force Eagle Squadrons were turned over to the United States Army Air Forces, with No. 121 Squadron being constituted as the 335th Fighter Squadron on 22 August, activated on 12 September and the same day assigned to the 4th Fighter Group of the VIII Fighter Command. Coming into USAAF service, the squadron was re-equipped with P-47 Thunderbolts and later P-51 Mustangs. They destroyed 262 enemy aircraft – 165 in the air and 97 on the ground.

They remained with the Group until they were returned to the United States and inactivated at Camp Kilmer, New Jersey on 10 November 1945.

After less than a year, the 335th was reactivated on 9 September 1946 at Selfridge Field, Michigan, and has remained on active duty since.

In 1947, the squadron was redesignated as the 335th Fighter Squadron, Jet Propelled, as it received the new P-80 Shooting Stars. They flew out of Andrews AFB, Maryland, until 1949, when they moved to Langley AFB, Virginia, and received the F-86 Sabre, which they took to Korea on 10 November 1950 as the 335th Fighter-Interceptor Squadron of the Fifth Air Force. By the end of the Korean War, the 335th led all squadrons with 218.5 kills (for around forty losses) and had become a part of the "MiG Killer" legend with 12 aces.

The 335th remained in the Far East until 8 December 1957, when they moved to their current base at Seymour Johnson AFB, North Carolina, and converted to the F-100 Super Sabre.

In May 1958, the squadron deployed to Eglin AFB, Florida, tasked with operational testing of the new F-105 Thunderchief for the next three years. In May 1959, the 335th became the first squadron in the Air Force to receive the F-105 Thunderchief, and the transition from F-100s to F-105s began. The squadron returned to Seymour Johnson AFB in November 1961.

The squadron saw action in Southeast Asia in November 1965, flying the F-105 out of Takhli RTAFB, Thailand. In 1969, the 335th transitioned to the airframe its aircrew would fly for the next twenty-three years—the F-4 Phantom II; later this year, they briefly deployed to South Korea. In 1972, the squadron again saw action in Vietnam, from July to December, flying out of Ubon RTAFB, Thailand.

Later in the 1970s, they became the first operational squadron to qualify with the GBU-15 guided bomb, and in doing so, exceeded 100,000 consecutive accident-free hours. They deployed briefly to Ramstein AB, Germany in 1978 and 1979, for a month each time.

On 1 March 1990, in conjunction with the fifty-first change of command, the squadron's final F-4 sortie and first F-15E sortie were flown. The 335th was the second fighter squadron in the Air Force to receive the Strike Eagle.

On 27 December 1990, the 335th deployed twenty-four F-15Es along with support personnel and equipment to Al Kharj Air Base in central Saudi Arabia. On the night of 16 January 1991, the 335th participated in the initial assault on Iraq, hitting communications, power networks, and airfields around Baghdad. The 335th made aerial warfare history by downing an Iraqi helicopter in the air using a laser-guided bomb. During the war, the squadron flew 1,097 combat missions over Iraq and occupied Kuwait, dropping over 4.8 million pounds of ordnance.

After the war, the 335th continued to fly combat air patrol missions over Iraq and Kuwait until relieved by the 334th Fighter Squadron, departing on 24 June 1991. Since then, the 335th has returned to Southwest Asia several times; three times to Dhahran, Saudi Arabia, and twice to Doha, Qatar, as an Air Expeditionary Force. The AEF-III deployment in 1996 was the first for an Air Force unit to Doha after the Desert Storm deployment of the 614th Tactical Fighter Squadron's F-16's during 1990–1991.

In February 2003 the 335th again deployed to Southwest Asia for Operation Iraqi Freedom. During Iraqi Freedom and Operation Southern Watch the squadron deployed 24 F-15Es, and flew 1,500 sorties, totaling 7,000 flying hours. They dropped over 1 million pounds of precision and non-precision munitions on numerous targets such as key Iraqi leadership, command and control bunkers, artillery Republican Guard units and many others. 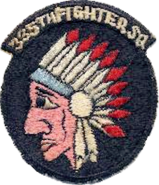 Much material on this page was originally sourced from a U.S. Air Force website.

Retrieved from "https://military.wikia.org/wiki/335th_Fighter_Squadron?oldid=4682854"
Community content is available under CC-BY-SA unless otherwise noted.