Military Wiki
Register
Don't have an account?
Sign In
Advertisement
in: Articles incorporating text from Wikipedia, Military units and formations established in 1917, Infantry regiments of the United States Army

The 337th Infantry Regiment was a National Army unit first organized for service in World War I as part of the 85th Infantry Division in Europe. It later served in the Mediterranean Theater during World War II. Since then it has served as a training Regiment, training Army Reserve and Army National Guard Soldiers for service in support of the Global War on Terror.[1][2]

.[3] The Regiment was constituted 5 August 1917 in the National Army as the 337th Infantry and assigned to the 169th Infantry Brigade of the 85th Division. It was organized at Camp Custer, Michigan on 30 August 1917. The Regiment deployed to France and was billeted in the cities of Nevers and Cosne. The Regiment didn't participate in any named campaigns during the war; it's INfantrymen were used as individual replacements to the fighting Divisions.[4][5] After completing its war service in France it arrived at the port of New York on 2 April 1919 on the U.S.S. Leviathan and demobilized at Camp Custer on April 23, 1919.[6]

The Regiment was reconstituted in the Organized Reserves as the 337th Infantry on June 24, 1921 and reassigned to the 85th Division (later redesignated as the 85th Infantry Division) in the Sixth Corps Area.[7] It was organized in December 1921 with the Regimental Headquarters and the 1st and 2d Battalions at Grand Rapids and the 3rd Battalion at Sault Ste Marie, Michigan. The 2nd and 3rd Battalions relocated by 1929 to Muskegon and Cadillac respectively. The Regiment conducted summer training most years with the 2d Infantry Regiment at Camp Custer. In 1928 and 1934, the Regiment conducted summer training with the 125th Infantry Regiment at Camp Grayling. They also conducted infantry Citizens Military Training Camp (CMTC) training some years at Camp Custer or Fort Brady, as an alternate form of summer training. The primary ROTC feeder school was Michigan State College of Agriculture and Applied Science.[8]

The Regiment was ordered into active military service May 15, 1942 and reorganized at Camp Shelby, Mississippi using a cadre provided by the 2nd Infantry Division.[10] The Regiment participated in maneuvers in the #2 Louisiana Maneuvers in April 1943 and the Desert Training Center #3 California Maneuvers in June 1943. It departed Hampton Roads Port of Embarkation on December 24, 1943, landed in Casablanca, North Africa on January 2, 1944 and received amphibious warfare training at Port aux Poules. It arrived in Naples, Italy on March 27, 1944. The 337th participated in the Rome-Arno, North Apennines, and the Po Valley campaigns in the Mediterranean Theater as part of the Italian Campaign. The Regiment usually fought as a Regimental Combat Team with the addition of the 328th Field Artillery Battalion, Company A, 310th Engineer Battalion and Company A, 310th Medical Battalion attached. The Regiment saw heavy combat attacking the German's Gustav and Gothic Lines as they moved north up the Italian Peninsula during Operation Diadem. The Regiment initially held defensive positions north of the Garigliano River until it attacked and seized Castellonorato until it was stopped by German resistance south of Monte Campese on May 16, 1944. The Regiment began a drive on Terracina on May 21 that on the 24th opened the road to the Anzio beach head. Over the next month, the Regiment fought through Monte Artemisio and Lariano. In June the 337th captured Monte Ceraso and advanced to the Viterbo River before being relieved on June 10, 1944. The Regiment relieved the 2nd New Zealand Division on the Arno River Line on 16 August. On 17 August the 337th seized Mount Pratone. By 18 September, the Division had penetrated the Gothic Line. The 85th Division went on the defensive near Pizzano from 27 October through 22 November 1944. On 9 January 1945, the 85th relived the British 1st Division near Monte Grande and then the 1st Armored Division on 17 April as part of Operation Grapeshot. On 26 April the Division crossed the Adige River in the Verona area and by 1 May was clearing the Piave Valley. The German forces in Italy surrendered on 2 May 1945. The Regiment departed Fagianeria, Italy for Hampton Roads and was inactivated at Camp Patrick Henry, Virginia on August 25, 1945. 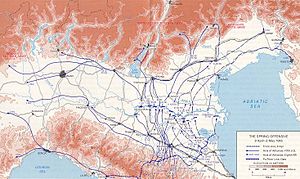 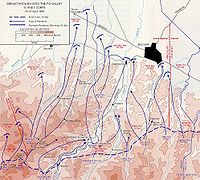 The Regiment was reconstituted on November 6, 1946 in the Organized Reserves with Headquarters in the Minneapolis, Minnesota under TOE 29-7T.[14] Its recruiting area was Illinois, Minnesota, South Dakota, and North Dakota. On December 31, 1949 the Regimental Headquarters was moved to Chicago, Illinois and then to Waukegan, Illinois on August 1, 1955.

Under the 85th Training Division[]

The 337th Infantry was redesignated as the 337th Regiment, and reorganized to consist of the 1st, 2d, and 3d Battalions, elements of the 85th Division (Training Support) on June 1, 1959. The 1st Battalion was allotted to the Regular Army on October 17, 1999 and assigned to the 4th Brigade with a mission to train Aviation units.[15]

Transformation of the Army[]

The 1st Battalion is a Regular Army unit assigned to the 181st Infantry Brigade at Fort McCoy, Wisconsin with a mission to train Brigade Support Battalions

The 2nd Battalion is an Army Reserve unit assigned to the 157th Infantry Brigade with a mission to train Combat Support and Combat Service Support units.[17]

* Description/Blazon A Gold color metal and enamel device 1 5/32 inches (2.94 cm) in height overall consisting of a shield blazoned: Azure, billette Or, a wolverine sejant guardant erect Argent. Attached below and to the sides of the shield a Gold scroll inscribed "VIS ET VIRTUS" in Black letters.