39th Brigade Support Battalion is an element of the 39th Infantry Brigade Combat Team, of the Arkansas Army National Guard. The battalion is headquartered at Hazen, Arkansas. The 39th Support Battalion was constituted on 2 November 1967 from existing units in central Arkansas and assigned to the 39th Infantry Brigade with headquarters in Hazen. Headquarters and Headquarters Battery, 2nd Battalion, 206th Field Artillery at Hazen was reorganized and redesignated as the Headquarters and Headquarters Company, 39th Support Battalion. The battalion originally comprised five companies: Headquarters and Headquarters Detachment (HHD) in Hazen, Company A (Admin) at Ricks Armory in Little Rock, Company B (Medical) in Lonoke with a detachment in DeWitt, Company C (Transportation) in Stuttgart with a detachment in Hazen, and Company D (Maintenance) in Perryville with a detachment at Fisher Armory in North Little Rock. In 1996 the unit reorganized into only four companies: Headquarters and Headquarters Company (HHC), Company A (Supply & Transportation), Company B (Maintenance), and Company C (Medical). In 2005 the battalion reorganized again into the 39th Brigade Support Battalion (BSB) and currently consists of eight companies: HHC, Company A (Distribution), Company B (Field Maintenance), Company C (Medical), Company D (RTSA Forward Support Company), Companies E & F (Infantry Forward Support Companies), and Company G (Field Artillery Forward Support Company). The Forward Support Companies (FSC) are task-organized to the battalion they habitually support, and they fall under the supported battalion's command and control with input from the 39th BSB Commander. Members of the unit supported a 2002 deployment in support of the Multinational Force and Observers mission in Egypt. The battalion has mobilized twice in support of Operation Iraqi Freedom, once in 2003–2005 and again 2007–2008.

On Order the 39th Brigade Support Battalion will mobilize and deploy in order to plan and supervise logistics and combat health service support operations for the 39th Infantry Brigade Combat Team.

Important events in the unit's early history include:

1975, 39th Support Battalion supplied and re-supplied the 5–206th Field Artillery over a distance of twenty miles for two weeks using only air drops, a first for a reserve component support unit

In 2003, a platoon from Company A mobilizes along with the 1123rd Transportation Company for Operation Iraqi Freedom.

In 2002 the 39th SB was notified that it would be participating in a rotation to the Joint Readiness Training Center (JRTC) at Fort Polk, LA along with the rest of the 39th Brigade. For National Guard units, a rotation to JRTC is a three year process that provides additional money, resources and training opportunities in order to improve unit readiness before the actual rotation through the JRTC. The battalion was required to complete a Mission Rehearsal Exercise during the Annual Training 2003 which was conducted at Fort Chaffee, Arkansas. Less than a month after the completion of this major training milestone, the 39th Support Battalion received its alert for deployment to Iraq in support of Operation Iraqi Freedom on 28 July 2003.

On 12 October 2003, the 39th SB, commanded by LTC Allen P. Hargis, was ordered to federal service in support of Operation Iraqi Freedom II for a period of up to eighteen months. The battalion would undergo post mobilization training at Fort Hood, Texas from October 2003 until January 2004. In January the brigade shipped its vehicles and equipment to Iraq from Fort Hood, and then moved to Fort Polk for a Mission Rehearsal Exercise at the JRTC.

When the battalion received its alert, it was approximately 130 soldiers short of its authorized end strength. This shortage was due in part to soldiers who had not yet completed Basic Combat Training and Advanced Individual Training, and in part to the fact that many soldiers from Company A had deployed in 2002 with the 2–153rd Infantry and in 2003 with the 1123rd Transportation Company. National Guard Bureau met the battalion's need for additional soldiers by alerting the 1115th Transportation Company and elements of the 642nd Maintenance Company from the New Mexico Army National Guard to bring the 39th SB to its full deployment strength.

The 39th Support Battalion was stationed at Camp Taji, Iraq. The battalion effectively conducted its doctrinal missions supporting the 39th Brigade Combat Team, and they performed numerous non-doctrinal missions. One such mission was running the Division Distribution Center in which they performed supply support for the entire 1st Cavalry Division. This mission is normally conducted by a Main Support Battalion. The 642nd Maintenance Company from of the New Mexico Army National Guard under the command of the 39th Support Battalion also ran the 39th Brigade Internment Facility, an operation recognized at all levels from brigade to corps as the standard for all theatre detention facilities. These are just two examples of the non-doctrinal missions the "Providers" conducted over the course of the deployment that caused it to be recognized by the 1st Cavalry Division commander.

The Iraqi deployment did not come without cost. The 39th Support Battalion lost five soldiers to enemy contact. CPT Arthur "Bo" Felder, CW4 Patrick Kordsmeier, SSG Billy Joe Orton, and SSG Stacey Brandon died on 24 April 2004 as a result of an early morning rocket attack on Camp Taji, Iraq.[1] 24 April was the highest single day casualty total for Arkansas soldiers since the Korean War. The attack actually consisted of two separate volleys of rockets, fired approximately 30 minutes apart. Members of the battalion had just emerged from the safety of their bunkers and were conducting accountability when the second volley of rockets slammed into a group standing just feet from a bunker door.

The 39th SB redeployed from Iraq, through Kuwait, in March 2005. The battalion demobilized at Fort Sill, OK.

On 28 August 2005, in the aftermath of Hurricane Katrina in New Orleans, the 39th Support Battalion was ordered to send six cargo trucks and twelve personnel to New Orleans to assist in evacuating the VA hospital. Not knowing what kind of conditions they would face, the battalion added a wrecker and a fuel truck (from the 35th Aviation Brigade) to the mission and sent sixteen soldiers and eight vehicles to New Orleans. Each of the volunteer soldiers informed employers and loved ones upon notification of the mission, and within hours they departed Hazen via convoy at approximately 2030 hours. Their orders were to drive the entire distance that night. If absolutely necessary, they were to stop and sleep, but there were hundreds of vets counting on their help. The convoy pressed on through the night, stopping every thirty or forty minutes to walk around and stay awake. They arrived at the staging area in Alexandria at 0430 the next day and began working around the clock to evacuate over 200 veterans. Some of the soldiers carried disabled vets on their backs down flights of stairs to load them on their 5-Ton trucks for evacuation.

In November 2005, the 39th Brigade was ordered to send a battalion task force to Louisiana to assist in more hurricane relief efforts. The task force was commanded by 2–153 IN and included a company-size element from the 39th Support Battalion. Elements of Task Force Arkansas remained in Louisiana through February 2006.

Upon redeployment in 2005, the 39th Support Battalion immediately began a major reorganization that transformed the battalion into a brigade support battalion under the United States Army's new Modular Design. This redesign of the army was intended to make the force more easily deployable by making brigades more self-contained and less dependent on support organizations at the division level. Major changes for the 39th Support Battalion included activation of four new Forward Support Companies, D, E, F and G. Along with this reorganization came a significant re-stationing of several units within the state of Arkansas.[2]

The 39th BSB did not deploy as a battalion for OIF 08-09, however its soldiers and several of its companies did:

Company A, 39th BSB was organized as a Convoy Security Company and was task organized under 1st Battalion, 153rd Infantry at Camp Liberty for Administrative Control (ADCON), but was under the Tactical Control (TACON) of the 168th Brigade Support Battalion.

Company D, 39th BSB was organized as a Convoy Security Company and was task organized under 1st Squadron, 151st Cavalry at Camp Talil Air Base.

Company G, 39th BSB was also organized as a Convoy Security Company and was task organized under 1st Battalion, 206th Field Artillery at Camp Taji for Administrative Control (ADCON), but was under the Tactical Control (TACON) of the theater's then largest battalion, the 165th CSSB of the Louisiana National Guard Commanded by LTC Randall B. Bradford.

The battalion commander, LTC Ricky Miller and his staff were incorporated into the 39th IBCT staff and assisted with the operation of the Base Defense Operations Center at Camp Victory, Baghdad.

The following soldiers have led the 39th Brigade Support Battalion:[3] 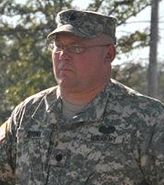 LTC Cory Sailor, 2011–Present
Add a photo to this gallery

The units of the 39th Brigade Support Battalion are currently stationed as follows:[4]

A gold-color metal and enamel device 1 1/8 inches height oval all consisting of the shield and motto of the coat of arms.[5]

Scarlet and buff (gold) are the colors used for support. The fret (formed by the saltire and mascle) is symbolic of the interlaced support provided to combat elements. The blue mascle also alludes to the blue band bordering the white diamond of the Arkansas State flag and refers to the home area of the organization.

Retrieved from "https://military.wikia.org/wiki/39th_Brigade_Support_Battalion_(United_States)?oldid=4683213"
Community content is available under CC-BY-SA unless otherwise noted.