The 52d Operations Group (OG) is the flying component of the 52d Fighter Wing, assigned to the United States Air Forces in Europe (USAFE). The group is stationed at Spangdahlem Air Base, Germany.

The group also supports contingencies and operations other than war as required.

The 606 ACS is a self-contained mobile combat unit including the TPS-75 Radar. The unit provides daily command and control to the 52 OG's two flying squadrons in addition to the occasional control of NATO Airborne Warning and Control System aircraft from Gelsenkirchen Air Base and visiting aircraft from around the USAFE Area of responsibility.[1]

The unit was constituted as the 52d Pursuit Group (Interceptor) on 20 November 1940, activated at Selfridge Field, Michigan on 15 January 1941 with the 2d,[2] 4th,[3] and 5th Pursuit Squadrons[4] assigned as its original squadrons. It was redesignated as the 52d Fighter Group in May 1942.[5] The group trained with Bell P-39 Airacobra and Curtiss P-40 aircraft, and participated in maneuvers with them until 1942 when it moved to the United Kingdom, the air echelon arriving in July 1942 and the ground echelon in August.[5]

The group trained with the Royal Air Force as part of Eighth Air Force, reequipped with Supermarine Spitfires and flew missions from England to France during August and September of that year.[5]

Group pilots flew Spitfires from Gibraltar to Algeria during Operation Torch, the invasion of North Africa on 8 November 1942.[5] The remainder of the group arrived by ship after the campaign in Algeria and Morocco had ended.[5] The group then operated as part of Twelfth Air Force through April 1944, thereafter becoming a part of Fifteenth Air Force, serving in combat in the Mediterranean until the end of World War II. It flew escort, patrol, strafing, and reconnaissance missions to help defeat Axis forces in Tunisia.[5] In Sicily, it attacked railroads, highways, bridges, coastal shipping and other targets to support the Allied operations. Having converted to North American P-51 Mustangs in April and May 1944, the group escorted bombers that attacked objectives in Italy, France, Germany, Czechoslovakia, Austria, Hungary, Romania, and Yugoslavia.[5] It received a Distinguished Unit Citation (DUC) for a mission on 9 June 1944 when the group protected bombers that struck aircraft factories, communications centers, and supply lines in Germany.[5] The 52d flew one of the first shuttle missions to Russia from 4–6 August 1944, and received a second DUC for strafing attacks on a landing field in Romania on 31 August 1944, destroying a large number of enemy fighter and transport planes.[5] On 24 March 1945, the group's aircraft flew the longest escort mission ever flown in Europe—1600 miles round-trip to Berlin.[citation needed] By the end of the war, the group's Mustangs had adopted yellow markings that covered the entire tail of the aircraft, earning them the nickname of "Yellow Tails.[6] The 52d returned to the US in August 1945 and was inactivated on 7 November 1945.[5]

In June 1947 the group was transferred without personnel and equipment to the United States, and became the 52d Fighter-Interceptor Group in May 1951 again flying P-61s and later North American F-82 Twin Mustangs, receiving its first jets, Lockheed F-94 Starfires beginning in 1950. In 1947, the Air Force began a service test of what was called the Hobson Plan[12] to unify control at air bases.[13] As a result of this test, the group was assigned to a provisional fighter wing at Mitchel AFB, New York. This test proved the wing-base plan to the satisfaction of the Air Force[12] and in 1948 group was assigned as the operational element of the 52d Fighter Wing before moving with the wing to McGuire AFB, New Jersey.[14] In a major reorganization of Air Defense Command (ADC) responding to ADC's difficulty under the existing wing base organizational structure in deploying fighter squadrons to best advantage.[15] the 52d was inactivated along with the 52nd Fighter-Interceptor Wing on 6 February 1952[5] and its two operational squadrons were transferred to the recently activated 4709th Defense Wing.[16][17]

The 52d was redesignated the 52d Fighter Group (Air Defense) and activated at Suffolk County AFB, New York on 18 August 1955, replacing the 519th Air Defense Group[18] as part of ADC's Project Arrow, a program to restore fighter units that had achieved distinction in the two World Wars.[5][19] Because one of the additional objectives of Project Arrow was to reunite groups with their traditional squadrons, the 2d[2] and 5th[4] Fighter-Interceptor Squadrons (FIS) moved to Suffolk County from McGuire AFB and took over the personnel, equipment, and radar equipped and rocket armed North American F-86D Sabre aircraft of the 75th and 331st FIS, which moved elsewhere.[20] It also became the USAF host organization for Suffolk County and was assigned several support units to fulfill this function.[21][22][23][24] The 2d FIS converted to F-102 Delta Daggers in January 1957, followed by the 5th FIS in April.[25] In December 1959, the 2d FIS began to fly F-101 VooDoos, while the 5th FIS retained its F-102s until moving to Minot AFB, North Dakota two months later.[4][25] The group served as an air defense unit in the New York/New Jersey area of the United States and also flew anti-submarine warfare missions until being inactivated in 1963 and replaced as the host unit at Suffolk County by the 52d Fighter Wing (Air Defense).[14][26] In 1968, as USAF operations at Suffolk County were reduced, it once again activated with F-101s to replace the 52d wing and close down USAF operations at the station in 1969.[14][26]

The 52d was redesignated the 52d Tactical Fighter Group and activated at Erding AB, West Germany under Seventeenth Air Force in 1971.[14] The group provided administrative and logistical support as the USAF host unit at Erding for F-102 Delta Dagger NATO air defense operations, but had no tactical units assigned. In 1972 the F-102s were withdrawn from Europe and the 52d FG was inactivated.[14]

On 31 March 1992, the group was redesignated the 52d Operations Group (OG) and activated as a result of the USAF objective wing reorganization.[14] Upon activation, the 52d OG assumed responsibility for the 52 Fighter Wing's operational squadrons and the newly activated 52d Operations Support Squadron.

During the 1990s, the wing supported no-fly zone operations over Bosnia and northern Iraq and combat operations against Serbia during Operation Allied Force in 1999. After terrorist attacks on the United States in 2001, the wing supported Operations Enduring Freedom and Iraqi Freedom, deploying combat and support elements in support of US and NATO missions. Although the group has also provided forces for Operation Urgent Fury, Operation Just Cause, Operation Southern Watch, Operation Coronet Macaw, Operation Restore Hope, Operation Support Justice and Operation Uphold Democracy, its forces were organized into provisional organizations, rather than remaining under group control for operations. 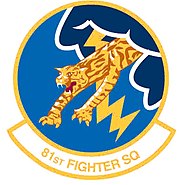 Retrieved from "https://military.wikia.org/wiki/52d_Operations_Group?oldid=4684228"
Community content is available under CC-BY-SA unless otherwise noted.