Military Wiki
Register
Don't have an account?
Sign In
Advertisement
in: Update needed, Pages with broken file links, Articles in need of updating from April 2014,
and 5 more

The 53rd Infantry Brigade Combat Team is a modular infantry brigade of the Florida Army National Guard. The 53rd Infantry Brigade is the largest National Guard unit in the state of Florida. The brigade was one of fifteen enhanced readiness brigades, designed and trained to support active duty divisions. The brigade includes 32 units in Florida with 4,166 authorized personnel.

The 53rd Infantry Brigade was originally part of the 27th Infantry Division, from November 1917 to 1919.

The brigade participated in hurricane relief operations in 1992 in response to Hurricane Andrew whereby the brigade was deployed for nearly two months to Miami.

Florida National Guard and U.S. Army Reserve officials joined U.S. Representative C.W. Bill Young, R-Fla., 1 December 2001, in announcing plans for a new joint training center that will be the future home of more than 1,700 military reservists. The 216,424-square-foot (20,106.4 m2) facility to be built at Gateway Center in Pinellas Park will replace three existing outdated and overcrowded facilities including Tampa's Fort Homer Hesterly Armory, the JF Campbell National Guard Armory in Clearwater and the Lovejoy U.S. Army Reserve Center in Tampa. Construction of the new $53.5 million project began in 2002, and was expected to be completed by the spring of 2003.[dated info] The House Appropriations Committee originally allocated $45 million for the project. Rep. Young, the committee's chairman, was crucial in securing the funds for the facility's construction.[citation needed] The National Guard units expected to be located at the new training center include the 53rd Infantry Brigade (Sep) Headquarters, Headquarters and Headquarters Company – 53rd Infantry Brigade, the 253rd Military Intelligence Company, as well as Companies A and B of the 53rd Support Battalion.

The brigade's three infantry battalions were activated in late December 2002. They were sent to Fort Stewart, Georgia for training.

In 2005, more than 2,400 soldiers from the 53rd Infantry Brigade deployed to Afghanistan as part of the international coalition’s Joint Task Force Phoenix, where they helped train the Afghan National Army.

In January 2010, the 53rd Infantry Brigade was activated for service in Kuwait and Iraq in support of Operation Iraqi Freedom. The brigade mobilized at Fort Hood, Texas and, beginning in late February, began deploying to Kuwait. Although originally scheduled for deployment to Afghanistan in 2009,[5] in 2008, the brigade learned that their mission had shifted from Infantry operations in Afghanistan to convoy security in Iraq.

The brigade's primary mission was to provide convoy security for logistical convoys moving in and out of Iraq. The 1st Battalion, 124th Infantry - the Hurricane Battalion - conducted medium and long haul missions from their base in Camp Buehring, Kuwait, while the 2nd Battalion, 124th Infantry - the Seminole Battalion - conducted short haul missions from their base in Camp Virginia, Kuwait. The 1st Squadron, 153rd Cavalry "Darkhorse" conducted security force missions in Northern Kuwait at Camps Buehring and Virginia as well as at Khabari Crossing in Kuwait. Bravo Troop, 1-153rd Cavalry was stationed at Camp As-Saliyah, Qatar.[6] The brigade headquarters element conducted administrative operations from Camp Arifjan, Kuwait. 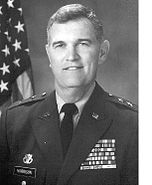