The 5th Army Corps was one of three corps the Italian Army fielded during the Cold War. Based in the regions of Veneto and Friuli-Venezia-Giulia the corps was the army's main combat force. The 5th Army Corps was arrayed close to the Yugoslavian border and tasked with meeting any Warsaw Pact forces that crossed the border. On the left flank of the corps the 4th Alpine Army Corps was tasked with blocking the Alpine passes and in the rear of the corps the 3rd Army Corps served as operational reserve. After the end of the Cold War the corps was reduced in size and on 1 October 1997 it became the 1st Defence Forces Command (COMFOD 1°). In 2013 the COMFOD 1° was disbanded and its function and brigades taken over by the 20th Infantry Division Friuli in Florence.

The history of the 5th Army Corps begins with Garibaldis Expedition of the Thousand. After Garibaldi scored victory after victory in his conquest of the Kingdom of the Two Sicilies, the Victor Emmanuel II of Sardinia decided to march south to secure the conquered territory for himself and thus unite Italy. The V Army Corps was raised and marched south with the main Army were it fought in the battles of San Giuliano on 26 October 1860 and Garigliano on 29 October 1860 and participated in the siege of Gaeta.

At the outbreak of the third Italian war of independence the V Army Corps remained at first in Florence, but when the main Italian army failed to break through the Austrian Quadrilatero fortress system south of Lake Garda in the Battle of Custoza, the corps marched six divisions over the Apennine mountains, joined up with General Enrico Cialdinis eight divisions of the IV Army Corps in the Romagna and crossed the lower Po and Adige rivers in force on 11 July 1866. Bypassing the Austrian fortresses and main army on his left flank Cialdini marched his army all through the Veneto, dispatching one division under Giacomo Medici to invade Trentino and cut the Austrian line of retreat and three divisions under Raffaele Cadorna to march at speed to the city of Trieste. Cialdinis army reached the Isonzo river on 24 July 1866.

After the Italian declaration of war against the Austrian Empire on 23 May 1915 the V Army Corps under Lieutenant General Florenzio Aliprandi as part of the 1st Army advanced into Trentino. On the corps left flank the III Army Corps advanced through the Valtellina, Camonica Trompia and Chiese valleys and along the Western shore of Lake Garda. The ultimate goal of the 1st Army was to reach the city of Trento. Although numerically superior the corps failed to reach the city of Trento and its advance through the Adige and Valsugana valleys and over the Asiago plateau soon bogged down in determined Austrian resistance. The corps consisted of the 9th and 15th Division of the Line (Infantry), the 34th Territorial Division, the 2nd, 4th and 8th Bersaglieri regiments and the 6th Alpini Regiment. All soldiers of the 6th Alpini Regiment had been recruited from valleys in the area of operations and thus fought in a territory they knew perfectly well. However the 6th Alpini Regiment was never employed as a whole, but single companies or battalions were given specific mountain summits, ridges or passes to conquer and hold.

After the initial advance had been brought to a halt by the Austro-Hungarian Army the corps dug in and, although fierce fighting continued the front in the corps' sector remained almost unchanged until 15 May 1916 when Austria unleashed its first major offensive on the Italian front on the Asiago plateau. The V Corps was badly mauled by the Austrian superiority in men and material but did not break. As the Russian began the Brusilov Offensive on 4 June the Austrian High Command decided do end its offensive operations in Italy before its strategic goal - a breakthrough into the Venetian plains behind the main Italian Army - had been achieved.

In 1945 the V Territorial Military Command was activated in Padova which at the time controlled only the 5th Alpini Regiment. But already by 1947 the command had grown to include the Infantry Division Folgore in Treviso and the Infantry Division Mantova in Gorizia. Both divisions were units of the Italian Co-Belligerent Army and had served on the Allied side during the Italian campaign. In 1948 the command was augmented with the Armored Brigade Ariete in Pordenone and in 1949 with the Alpine Brigade Julia in Cividale del Friuli. The commad was tasked with defending the Italian Eastern borders: the Mantova was to defend the city of Gorizia, while the Julia covered the commands left flank in the Carnic Alps. The fully motorized Folgore was tasked to advance to the Free Territory of Trieste and support the Trieste United States Troops, while the Ariete with its M4 Sherman tanks, M3 Half-tracks and M7 Priests served as the commands mobile reserve. To cover its right flank against enemy amphibious landings the command raised the Lagunari troops in Venice on 15 January 1951.

On 1 May 1952 the V Territorial Military Command was renamed as V Army Corps and as the West-East confrontation became more dire the Ariete tripled in size and became the Armoured Division Ariete on 1 October 1952. division also exchanged its Sherman tanks for more powerful M26 Pershings. On 30 September the corps 1953 moved to Vittorio Veneto and ceded command of the Julia brigade to the new Carnia-Cadore Troops Command, which covered the V Army Corps left flank.

Over the next years the corps added further units to keep up with the geo-political situation of the Cold War: the Ariete was further increased and received M47 Patton tanks and M113 armored personnel carriers, as well as one artillery group armed with M44 self-propelled howitzers and one artillery group armed with M110 self-propelled howitzers. The Mantova and Folgore infantry divisions were each increased by one infantry regiment and both received a tank battalion with M47 Patton tanks. In Trieste the 151st Infantry Regiment Sassari and the 14th Field Artillery Regiment formed the Trieste Troops Command tasked with defending the city. At the same time the Lagunari regiment in Venice grew to three amphibious battalions and one tank battalion with M47 Patton tanks. In Gorizia on 1 January 1959 the mechanized Cavalry Brigade Pozzuolo del Friuli activated with two mechanized, one tank battalion and one self-propelled artillery group, to replace the Mantova division, which had moved its headquarter to Udine.

The most significant addition to the corps was the III Missile Brigade. The brigade activated on 1 October 1959 in Vicenza and initially consisted of one missile artillery regiment with two missile groups, each of which was armed with eight Honest John missile launchers. The MGR-1 Honest John was a nuclear-capable surface-to-surface missile intended to destroy the large Warsaw Pact armoured formations. By the 1963, when the brigades headquarter was moved to Portogruaro, the brigade contained four missile groups and one group with M115 howitzers.

The corps - along with the 3rd Army Corps and 4th Army Corps was part of NATOs Allied Land Forces Southern Europe Command (LANDSOUTH) in Verona.

In 1975 the Italian Army undertook a major reorganisation: the regiment level was abolished and battalions came under direct command of brigades, which combined units from different combat arms. In the same year the spelling of the name of the corps was changed from V Army Corps to 5th Army Corps. Therefore the 5th Army Corps' new structure at the end of 1975 was as follows:

In 1976 the entire corps was heavily involved in the rescue and clean up efforts after the 1976 Friuli earthquake. 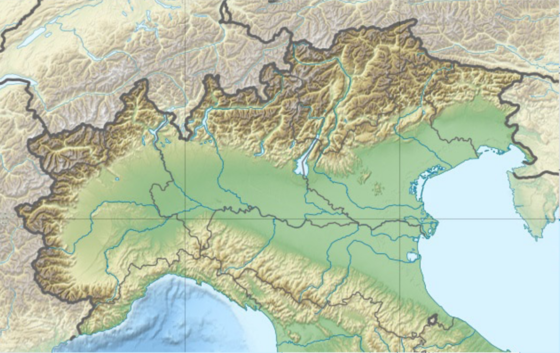 Aquileia
Combat brigades of the 5th Army Corps in 1986

In 1986 the Italian Army abolished the divisional level and realigned its forces to counter a possible Warsaw Pact attack better. The 5th Army Corps was to destroy enemy forces within the region of Friuli-Venezia-Giulia, while the 4th Alpine Army Corps covered the V Army Corps' left flank and the 3rd Army Corps was the operational reserve. As two of the V Army Corps' mechanized brigades were based outside its area of operation, the V Corps lost these two brigades to the 3rd Army Corps: the Brescia in Brescia and the Trieste in Bologna. As the Ariete and Mantova divisions carried historically significant names - the Ariete having fought bravely in the Siege of Tobruk and Battle of Gazala and fought to annihilation in the Second Battle of El Alamein, and the Mantova being one of the divisions that fought in the Italian Co-Belligerent Army to liberate Italy from Nazi-occupation - the army decided to rename the 132nd Armoured Brigade Manin as 132nd Armoured Brigade Ariete and the Mechanized Brigade Isonzo as Mechanized Brigade Mantova. Although the Folgore divisions carried and equally significant name the army decided to transfer the traditions of the Folgore division to the existing Parachute Brigade Folgore. After the reform of 1986 the V Corps was structured as follows:

Each mechanized brigade fielded about 4,700 men, while the armoured brigades fielded about 3,400 men. Together with the corps' support units the entire corps fielded over 60,000 men.

After the Cold War[edit | edit source]

With the end of the Cold War the Italian Army began a decade long reduction of its forces. The first brigade to disband was the Mameli on 1 April 1991, followed by the Vittorio Veneto on 31 July 1991. The units subordinated to these brigades were mostly disbanded, with a few units joining other brigades. The Garibaldi completed its move to Caserta in the South of Italy on 1 July 1991 and left the 5th Army Corps on that day. Finally on 1 December 1991 the Aquileia was reduced to 3rd Artillery Regiment Aquileia, which was then disbanded in September 1992. Over the next few years the Trieste Troops Command and the Amphibious Troops Command were disbanded.

In 1997 the army undertook the next big reform process and the 5th Army Corps saw its Gorizia and Mantova brigades disbanded on 30 August 1997, but it received the Mechanized Brigade Centauro from the 3rd Army Corps. On 1 October 1997 the 5th Army Corps changed its name and became the 1st Defence Forces Command (1° Comando Forze di Difesa or COMFOD 1°). The new structure of the corps was:

On 1 December 2000 the Projection Forces Command (COMFOP) ceded two of its brigades - the Parachute Brigade Folgore and Air Assault Brigade Friuli to the 1st Defence Forces Command. In 2002 the command changed composition for the last time: the Centauro brigade was disbanded on 5 October 2002 and all support units were either disbanded or transferred to other commands. However in the same year the command began to build up a deployable division level headquarter. Said headquarter became operational in October 2005 and was given the name Mantova Division Command.

Before being disbanded the 1st Defence Forces Command was located in the northern Italian City of Vittorio Veneto and consisted of the following units:

Retrieved from "https://military.wikia.org/wiki/5th_Army_Corps_(Italy)?oldid=4684465"
Community content is available under CC-BY-SA unless otherwise noted.