The 60th Air Mobility Wing (60 AMW) is the largest air mobility organization in the United States Air Force and is responsible for strategic airlift and aerial refueling missions around the world. It is the host unit at Travis Air Force Base in California. Wing activity is primarily focused on support in the Middle East region, however it also maintains operations in areas of the Pacific and Indian Oceans.

Its mission is to provide rapid, reliable airlift of U.S. armed forces personnel and equipment anywhere on earth, and to extend the reach of American and allied air power through mid-air refueling.[citation needed]

When the 60th Troop Carrier Wing was activated on 1 July 1948, its tactical units were detached, supporting the Berlin Airlift from other bases. The wing operated under control of the provisional airlift task force from 29 July 1948 but was not directly involved in airlift operations until it moved to RAF Fassberg, Germany in January 1949. From 20 to 26 January September 1949, the wing flew Berlin airlift missions, primarily with C-54s. The wing then moved to Wiesbaden, Germany replacing the 7150th Air Force Composite Wing. Without a tactical mission until June 1951, the wing operated a variety of aircraft in support of USAFE and other units. Upon moving to Rhein-Main Air Base, Germany, in June 1951 (where it replaced the 61st Troop Carrier Wing), the 60th resumed a tactical role. Operating from Rhein-Main Air Base until October 1955, the 60th provided airlift for troops and cargo throughout Europe, North Africa, and the Middle East. It also provided training to the 433d Troop Carrier Wing, August 1951 – July 1952, and the 312th Troop Carrier Wing, July 1952 – March 1953. The wing moved to France in 1955 with no change in the basic airlift mission and continued operations from that area until inactivated on 25 September 1958.

The 60th Military Airlift Wing was re-activated on 27 December 1965 and replaced the 1501st Air Transport Wing, Heavy, as the "host-wing" at Travis Air Force Base, California, on 8 January 1966. It flew global airlift and humanitarian missions from that time, initially with C-124, C-130, C-133, and C-141 aircraft. The wing lost its C-130s in 1966, C-124s in 1967, and C-133s in 1971 but gained first operational C-5s in October 1970. Airlift of cargo and troops to Southeast Asia was a major responsibility of the wing, 1966–1975, but missions flown worldwide as required. In 14 November 1966, a C-141 of the 60th Wing became the first jet aircraft to land in Antarctica. The 60th also played a major role in the airlift of repatriated prisoners of war to the United States after the Vietnamese ceasefire agreement in 1973, and in the airlift of Vietnamese children and other refugees to the United States in 1975. After the war in Southeast Asia, the 60th continued to support worldwide airlift commitments, including scheduled and contingency logistics operations, humanitarian relief and evacuation efforts, and international scientific research programs. It provided logistic support to the President of the United States during state visits to foreign nations and conducted airlift missions annually in the Antarctic, including the first C-5 ice cap landing. The wing exchanged its C-141A aircraft for "stretched" C-141B version in 1980–1982; transferred re-winged C-5A aircraft to Air Force Reserve and replaced them with more capable C-5B, 1986–1989. The wing performed combat airlift and logistic support missions during the rescue of US nationals on Grenada in October 1983 and the restoration of democracy in Panama, December 1989 – January 1990.

Beginning in August 1990, the wing provided airlift and logistic support to US and coalition forces in Southwest Asia, while continuing to perform worldwide airlift operations, including humanitarian missions to nations to Latin America and the former Soviet Union. In 1992–1993, commenced airlift in support of U.S. relief operations in Somalia during Operations PROVIDE RELIEF and RESTORE HOPE. It continued to support on-going operations in Southwest Asia during Operation SOUTHERN WATCH. The wing's elements also supported Operation PROVIDE COMFORT for Kurdish refugees, supported the evacuation of military personnel and their dependents from the Philippines through Operation FIERY VIGIL in 1991, and provided airlift support to Balkans peacekeeping missions beginning in 1995 with Operation JOINT ENDEAVOR, and continuing under Operations JOINT GUARD and JOINT FORGE. It deployed tanker and support elements to the European theater during Operation ALLIED FORCE from March–June 1999, as well as providing airlift support to other air expeditionary forces deploying to the operation.

After the 11 September 2001 terrorist attacks on the World Trade Center and the Pentagon, the 60th began airlift and refueling operations in support of Operations NOBEL EAGLE and ENDURING FREEDOM. In March 2003, the United States as part of the Global War on Terrorism, initiated Operation IRAQI FREEDOM.

One 8 August 2006, the 60th received its first C-17 Globemaster III aircraft "The Spirit of Solano". The next day, that aircraft was made operational and flew its first mission. The wing won top honors as the best Air Mobility Wing during the 2007 Air Mobility Rodeo. On 5 November 2008, the 60th received its 13th and final C-17 aircraft, "The Spirit of Travis." Fifteen members of the Travis family were on hand to witness the aircraft's arrival. 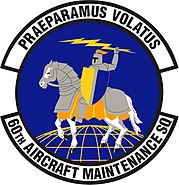 60 AMXS
Add a photo to this gallery

Retrieved from "https://military.wikia.org/wiki/60th_Air_Mobility_Wing?oldid=4684564"
Community content is available under CC-BY-SA unless otherwise noted.