The 7.62×45mm (designated as the 7,62 × 45 by the C.I.P.)[2] is a rimless bottlenecked intermediate rifle cartridge developed in Czechoslovakia. It is fired by the Czech vz. 52 rifle, Vz. 52 machine gun and ZB-530 light machine gun. The round was later dropped from use when the Czech converted to the standard Warsaw Pact round, the 7.62×39mm (fired by vz. 52/57 rifle and vz. 52/57 light machine gun). Its muzzle velocity and muzzle energy are slightly higher than that of the 7.62×39mm cartridge.

The 7.62×45mm has 2.79 ml (43.1 grains H2O) cartridge case capacity. The exterior shape of the case was designed to promote reliable case feeding and extraction in bolt action and semi-automatic rifles and machine guns alike, under extreme conditions. 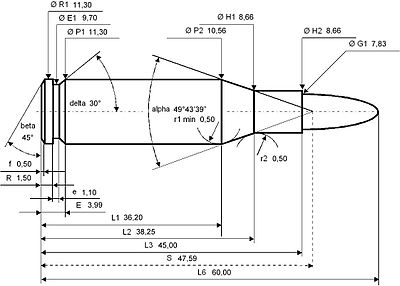 According to the official C.I.P. (Commission Internationale Permanente pour l'Epreuve des Armes à Feu Portatives) rulings the 7.62×45mm can handle up to 430.00 MPa (62,366 psi) Pmax piezo pressure. In C.I.P. regulated countries every rifle cartridge combo has to be proofed at 125% of this maximum C.I.P. pressure to certify for sale to consumers.[2] This means that 7.62×45mm chambered arms in C.I.P. regulated countries are currently (2014) proof tested at 537.50 MPa (77,958 psi) PE piezo pressure.

There are definite differences in reported dimensions from non-official sorces for this cartridge. Some of this may be accounted for by small errors in conversion from metric to inches, while others such as loaded length may additionally be attributed to different lengths of bullets being measured in loaded rounds. A sample list of various measurements is in the table below.

The 7.62×45mm case is also used as the parent case for a modified variant that is not officially registered with or sanctioned by the C.I.P. or its American equivalent, the SAAMI. Such cartridges which use commercial factory cases are generally known as wildcats. By changing the shape of standard factory cases (decreasing case taper and/or changing the shoulder geometry) the wildcatter generally increases the case capacity of the factory parent cartridge case, allowing more propellant to be used to generate higher velocities. Besides changing the shape and internal volume of the parent cartridge case, wildcatters also can change the original calibre. A reason to change the original calibre can be to comply with a minimal permitted calibre or bullet weight for the legal hunting of certain species of game or change external or terminal ballistic behavior. In his spare time Chis E. Murray has been developing the ultimate military cartridge which he calls the 7×46mm Universal Intermediate Assault Cartridge.[7] The 7×46mm is designed to replace both the 5.56mm and 7.62mm NATO cartridges. It is low recoil and so can be used from carbines, but has long enough range to be used in machine guns and designated marksmen rifles. Its overall length has been optimized so that guns chambering it would be bigger than an AR-15 but smaller than a AR-10.[8]

Retrieved from "https://military.wikia.org/wiki/7.62×45mm?oldid=2675935"
Community content is available under CC-BY-SA unless otherwise noted.