The 7.65×53mm Mauser was the result of considerable experimentation by Paul Mauser to optimize the bullet diameter for use with the new smokeless propellant introduced as Poudre B in the 1886 pattern 8mm Lebel that started a military rifle ammunition revolution.[3] At the time of its development it was a high-performance smokeless-powder cartridge.

This cartridge was loaded commercially by many manufacturers in the United States until about 1936.[1] Hornady is the only major U.S. ammunition manufacturer to still produce this cartridge. Sporting ammunition in this caliber is still loaded in Europe.[1] Norma, Prvi Partizan, Sako and Fabricaciones Militares (FM) currently produce 7.65×53mm ammunition.[4] For reloading the cartridge, use .303" British load data.

The 7.65×53mm Mauser has 3.70 ml (57.1 grains H2O) cartridge case capacity. The exterior shape of the case was designed to promote reliable case feeding and extraction in bolt action rifles and machine guns alike, under extreme conditions. 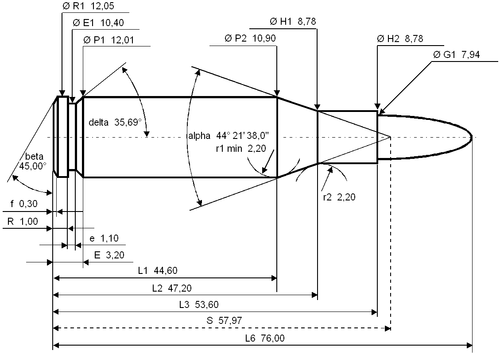 According to the official Commission Internationale Permanente pour l'Epreuve des Armes à Feu Portatives (CIP) rulings the 7.65×53mm Mauser can handle up to 390.00 MPa (56,565 psi) Pmax piezo pressure. In CIP member countries every rifle cartridge combination has to be proofed at 125% of this maximum pressure to certify fit for sale to consumers. This means that 7.65×53mm Mauser chambered arms in CIP regulated countries are currently (2013) proof tested at 487.50 MPa (70,706 psi) PE piezo pressure.[2]

The American .308 Winchester cartridge is a close ballistic twin of the 7.65×53mm Mauser. The .308 Winchester being a post World War II cartridge developed by Winchester to provide similar performance in a short bolt action format.[citation needed]

Due to the cartridge case's dimensions, production of 7.65mm brass can be accomplished by reforming .30-06 Springfield cases. Simply resize and trim.

At one time, the 7.65×53mm Mauser cartridge saw widespread military use. It was used by:

Some of the rifles it was used in were the Mauser Model 1889, Argentine Modelo 1909 Carbine, Modelo 1908, Modelo 1910, the Fittipaldi machine gun, Madsen machine gun and the Argentine FN Model 1949. In Argentinian military service, the cartridge was used from 1891 to the early 1970s in Mauser bolt-action military rifles, as well as a semi-automatic rifle, the FN-49, manufactured by Fabrique Nationale in Belgium.