71 Brigade can trace its origins back to a structure in the late 1960s, called 17 Brigade, which was headquartered in Cape Town. 17 Brigade was housed in the Castle with Western Province Command.[1] On 1 August 1974, through a reorganization of the Army’s conventional force, the name was changed to 71 Motorised Brigade.[2]

Under this reorganisation, the following units were transferred from Western Province Command to the new command:

71 Motorised Brigade then resorted under the new 7 Division.

71 Motorised Brigade structure was not static, units were substituted as needs were adapted to. The increased use of armour in the Border War necessitated a decision for each brigade to have a tank capability. Prince Alfred's Guard was nominated to be 71 Motorised Brigade's tank regiment and was transferred from Eastern Province Command to 71 Motorised Brigade on 1 April 1989.

71 Motorised Brigade would generally make use of the General de Wet Training Range, Tempe, near Bloemfontein. Notably 71 Motorised Brigade was involved in Exercise Thunder Chariot, a Divisional exercise held since 1956, at the Army Battle School. Other exercises included:

71 Motorised Brigade also made use of the Apostle Battery on the mountain slopes above Llandudno, near Hout Bay.

As a Citizen Force structure, 71 Motorised Brigade would make use of call-up orders for its personnel to generally report for 3 months service. Headquarters staff would then leave for Tempe near Bloemfontein, where a transfer camp would be established to process troops en route to the operational area in northern South West Africa. Processing of units would include personal documentation, a medical examination, inoculation and the issuing of equipment and weapons. Each unit on completion of the necessary processing, would entrain to the Olienhoutplaat Station for a six-day journey to Grootfontein, the railhead near the Operational Area. By 1980 however, 71 Motorised Brigade’s headquarters had moved from Tempe to the Army Battle School.

71 Motorised Brigade provided reinforcements to Sector 10 during September and October 1988, with "Operation Prone" these included a HQ, a mechanised combat group, a workshop unit and elements of the Brigade’s signals and maintenance units.[3]

The new Division officially acquired Regiment Simonsberg, Cape Garrison Artillery and 7 Light Anti-Aircraft Regiment under its command on 10, 11 and 12 June. These units were followed on 22 and 23 October by Regiment President Steyn, a tank Regiment and Regiment Groot Karoo. 12 Provost Company was due to fall under command on 1 January 1992, on which date they would be redesignated 9 Provost Company. The Division now had 19 units under its command and was now affiliated to 3 Medical Battalion Group as well. 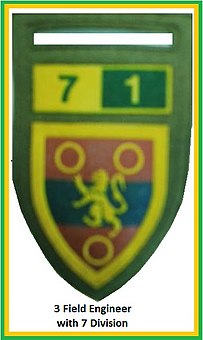 Retrieved from "https://military.wikia.org/wiki/71_Motorised_Brigade_(South_Africa)?oldid=4664496"
Community content is available under CC-BY-SA unless otherwise noted.