The 76 mm air defense gun M1931 (Russian: 76-мм зенитная пушка обр. 1931 г.) was a anti-aircraft gun used by the Soviet Union during the Winter War and the first stages of World War II.

The configuration of the air defense gun M1931 owed much to the design of the contemporary Vickers 3-inch anti-aircraft guns. The Soviet M1931 like the Vickers gun had a two-wheeled carriage with collapsible cruciform outriggers.[1]

The M1931 was replaced in production in 1938 by the 76 mm air defense gun M1938 which had a four-wheeled dual-axle carriage with two collapsible outriggers. The M1931 and M1938 had nearly identical performance and were gradually replaced by the more powerful 85 mm air defense gun M1939.[1] A number of M1931 guns were captured by Finland during the Winter War and were employed by them as the 76 ItK/31 ss during World War II.[3] Likewise, M1931 guns captured by the Germans were given the designation 7.62 cm Flak M.31(r) and used until they were either worn out or their ammunition supply ran out. A few were rebored to fire German 8.8 cm ammunition and redesignated the 7.62/8.8 cm Flak M.31(r). However, the majority were scrapped in 1944.[1] 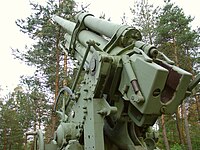