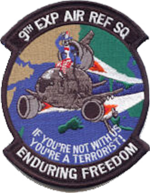 The 9th Air Refueling Squadron (9th ARS) was initially activated in 1951, although its history can be traced back to the 9th Photographic Squadron of World War II. The 9th ARS has had many deployments to worldwide locations, and is still performing a global mission (some to remote forward operating location), during wartime, humanitarian operations, and exercises.

Deployed to the China-Burma-India Theater of Operations (CBI) during the summer of 1943; being assigned to Headquarters, Tenth Air Force. Flights of F-5 (P-51D) photo-reconnaissance aircraft operated over a wide area of Burma; Thailand and China until the Japanese Capitulation in August 1945 obtaining aerial photos and reconnaissance of enemy positions and targets for heavy bomber attacks. Flew tactical reconnaissance missions to support United States and British ground forces in Burma.

Returned to the United States during the fall of 1945, inactivated in December. Unit transferred their mission to worldwide air refueling, and with a name change to the 9th Air Refueling Squadron, Medium, received KB-29 tanker aircraft. They then began refueling operations from August 1951 to December 1965, January 1970 to January 1982, and from August 1982 through today, including support during the rescue of US nationals from Grenada in 1983, support for deployments to Southwest Asia from 1990 to 1991, and humanitarian airlift missions to Somalia in support of Operation Restore Hope during 1992–1993. On 19 September 1985 the 9th Air Refueling Squadron was consolidated with the 9th Photographic Reconnaissance Squadron, a unit that was last active 4 September 1945. This action was directed by Department of the Air Force Letter DAF/MPM 662q Attachment 1 (Active Units), 19 September 1985. The Consolidated Unit will retain the Designation of 9th Air Refueling Squadron, Heavy".

The 9th ARS has a proud legacy of participation in Air Force Operations such as: