The 9th Army (German language: 9. Armee / Armeeoberkommando 9 / A.O.K. 9) was an army level command of the German Army in World War I. It was formed in September 1914 in Breslau to command troops on the southern sector of the Eastern Front. The army was dissolved on 30 July 1916, but reformed in Transylvania on 6 September 1916 for the Romanian Campaign. It was transferred to the Western Front on 19 June 1918 where it was finally dissolved on 18 September 1918.[1]

The 9th Army Headquarters was established in Breslau on 19 September 1914 and commanded units drawn from the 8th Army, the Western Front and other units in Upper Silesia.[2] It was originally placed on the southern sector of the Eastern Front on the left flank of the 1st Austro-Hungarian Army.

9th Army was reformed for the Romanian Campaign in September 1916. Along with the 1st Autro-Hungarian Army (1st A-H Army) it formed the Siebenburg Sector and had the following units:[5] 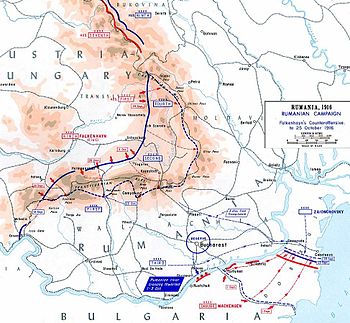 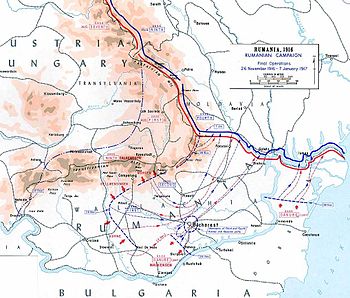 Operations in Romania, November 1916 to January 1917
Add a photo to this gallery

The original 9th Army had the following commanders until it was dissolved 30 July 1916:[7]

A "new" 9th Army was formed in Transylvania for the Romanina Campaign on 6 September 1916. It was dissolved on the Western Front on 18 September 1918.[9]

Retrieved from "https://military.wikia.org/wiki/9th_Army_(German_Empire)?oldid=4685723"
Community content is available under CC-BY-SA unless otherwise noted.