The AN/SPS-40 is a United States Navy two-dimensional, long range air search radar that is capable of providing contact bearing and range. It was used on Perth-class destroyers, Charles F. Adams-class destroyers, Spruance-class destroyers, Belknap-class cruisers, Leahy-class cruisers, Knox-class frigates, Bronstein-class frigates, Hamilton-class cutters, Raleigh-class amphibious transport docks and many other ship classes. Its "basket" antenna with the over-the-top feed line was a familiar sight throughout the Navy even into the early '80s. It was replaced by the AN/SPS-49 on newer ships and on ships that received the New Threat Upgrade.

The SPS-40, being a vacuum tube design, was notoriously sensitive to the vibration from shipboard gunfire. A later redesign into a largely solid-state system not only improved its performance (cutting the number of cabinets by more than half) also featured one of the best MTI (Moving Target Indicator) units in the fleet - a rarity in the early 1970s. 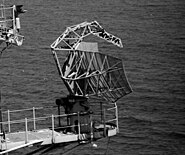 Retrieved from "https://military.wikia.org/wiki/AN/SPS-40?oldid=2222633"
Community content is available under CC-BY-SA unless otherwise noted.