Abatis, abattis, or abbattis is a term in field fortification for an obstacle formed (in the modern era) of the branches of trees laid in a row, with the sharpened tops directed outwards, towards the enemy. The trees are usually interlaced or tied with wire. Abatis are used alone or in combination with wire entanglements and other obstacles.[1]

There is evidence it was used as early as the Roman Imperial period, and as recently as the American Civil War.[2] Abatis is rarely seen nowadays, having been largely replaced by wire obstacles. However, it may be used as a replacement or supplement when barbed wire is in short supply. A form of giant abatis, using whole trees instead of branches, can be used as an improvised anti-tank obstacle.

A classic use of an abatis was found at the Battle of the Chateauguay, 26 October 1813, when approximately 1,300 Canadian voltigeurs, under the command of Charles-Michel de Salaberry, defeated an American corps of approximately 4,000 men. Another striking example was its use by Alexander Macomb in the stunning victory at the Battle of Plattsburgh.

An important weakness of abatis, in contrast to barbed wire, is that it can be destroyed by fire. Also, if laced together with rope instead of wire, the rope can be very quickly destroyed by such fires, after which the abatis can be quickly pulled apart by grappling hooks thrown from a safe distance.

An important advantage is that an improvised abatis can be quickly formed in forested areas. This can be done by simply cutting down a row of trees so that they fall with their tops toward the enemy. An alternative is to place explosives so as to blow the trees down.

Though rarely used by modern conventional military units, abatises are still officially maintained in United States Army and Marine Corps training. Current training instructs engineers or other constructors of such obstacles to fell trees, leaving a 1 or 2 yard stump, in such a manner as the trees fall interlocked pointing at a 45-degree angle towards the direction of approach of the enemy. Furthermore, it is recommended that the trees remain connected to the stumps and the length of roadway covered be at least 80 yards. US military maps record an abatis by use of an inverted "V" with a short line extending from it to the right.[3] 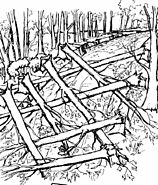 Giant abatis, made from entire trees, can make an effective anti-vehicle obstacle. This formation can be achieved by use of explosives—note the splintered stumps.
Add a photo to this gallery

Retrieved from "https://military.wikia.org/wiki/Abatis?oldid=4276730"
Community content is available under CC-BY-SA unless otherwise noted.