Abd al-Qadir al-Husayni (Arabic language: عبد القادر الحسيني‎, also spelled Abd al-Qader al-Husseini) (1907 – 8 April 1948) was a Palestinian Arab nationalist and fighter who in late 1933 founded the secret militant group known as the Organization for Holy Struggle (Munathamat al-Jihad al-Muqaddas),[1][2] which he and Hasan Salama commanded as the Army of the Holy War (Jaysh al-Jihad al-Muqaddas) during the 1936–39 Arab revolt and during the 1948 war.

Husayni was born to the influential al-Husayni family of Jerusalem, son of Musa al-Husayni and the nephew of Amin al-Husayni. He graduated in chemistry at the American University in Cairo, and organized the Congress of Educated Muslims.

Initially, he took a post in the settlement department of the British Mandate government, but eventually moved to the Hebron area during the 1936–39 Arab revolt in Palestine to lead the struggle against the British. A member of the Palestine Arab Party, he served as its secretary-general and became editor-in-chief of the party's paper Al-Liwa’[3] and other newspapers, including Al-Jami’a Al-Islamiyya.

Abd al-Qadir married in 1934 and fathered Faisal al-Husayni (17 July 1940 – 31 May 2001), the founder and leader of Arab Studies Society, head of Fatah organization in the West Bank and Palestinian Authority Minister for Jerusalem Affairs.

In 1938, Husayni was exiled and in 1939 fled to Iraq where he took part in the Rashid Ali al-Gaylani coup. He moved to Egypt in 1946, but secretly returned to Palestine to lead the Army of the Holy War in January 1948. Husayni was killed while personally reconnoitring an area of Qastal Hill shrouded by fog, in the early hours of 8 April 1948.[4] His forces later captured al-Qastal from the Haganah, which had occupied the village at the start of Operation Nachshon six days earlier with a force of about 100 men.[5] They retreated to the Jewish settlement of Motza.[6] Palmach troops recaptured the village on the night of 8–9 April, losing 18 men in the attack;[7] most of the houses were blown up and the hill became a command post.[8][9] Huseyni's death was a factor in the loss of morale among his forces.[10]

Abdul Qader al-Husseini with his troops prior to the January 1948 attack on Kfar Etzion. Photograph taken by a Palmach spy 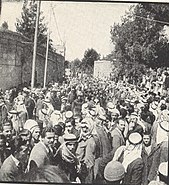 Retrieved from "https://military.wikia.org/wiki/Abd_al-Qadir_al-Husayni?oldid=4199966"
Community content is available under CC-BY-SA unless otherwise noted.