Adolphe (Adolf Wilhelm August Karl Friedrich; 24 July 1817 – 17 November 1905) was the last sovereign Duke of Nassau, reigning from 20 August 1839 until the duchy's annexation to Kingdom of Prussia in 1866. In 1890, he became Grand Duke of Luxembourg following the death of King William III of the Netherlands, ending the personal union between the Netherlands and Luxembourg, until his own death in 1905. He was the first monarch of Luxembourg from the House of Nassau-Weilburg.

Adolphe became Duke of Nassau in August 1839, following the death of his father William. After Austria's defeat in Austro-Prussian War of 1866, Duchy of Nassau was annexed to Kingdom of Prussia and he lost his throne.

Adolphe died in 1905 and was succeeded as Grand Duke of Luxembourg by his son, William IV.

He was a son of William, Duke of Nassau (1792–1839), and his first wife, Princess Louise of Saxe-Hildburghausen. Adolphe's half-sister, Sophia of Nassau, was the wife of Oscar II of Sweden.

Adolphe became Duke of Nassau in August 1839 at the age of 22, after the death of his father. Wiesbaden had by this time become the capital of the Duchy and Adolphe took up residence in the newly constructed Stadtschloss in 1841. On 4 March 1848 he consented to the population of Nassau's 9 "Demands of the Nassauers". A few years later, however, he revoked his liberal views and took a strongly conservative and reactionary course. In general, though, he was seen as a popular ruler. He supported the Austrian Empire in the Austro-Prussian War of 1866. After Austria's defeat, Nassau was annexed to the Kingdom of Prussia and he lost his throne on 20 September 1866.

In 1879, Adolphe's niece Emma of Waldeck and Pyrmont, the daughter of another of his half-sisters, married William III, King of the Netherlands and Grand Duke of Luxembourg. In 1890, their only daughter Wilhelmina succeeded on his death without surviving male issue to the Dutch throne, but was excluded from the succession to Luxembourg by Salic Law. The Grand Duchy, which had been linked to the Netherlands in personal union since 1815, passed to Adolphe in accordance with the Nassau Family Pact. Adolphe was King-Grand Duke William III's 17th cousin once removed through male line, which is the greatest distance over which a crown has ever been inherited.

He had, in fact, taken over the regency of Luxembourg for a short time during William III's illness.

In any case, as he was already 73 years old and knew little of Luxembourgish politics, he left his hands off the day-to-day governing. The prime minister Paul Eyschen, in office since 1888, took care of the affairs of state, and this created a tradition that the ruler would remain absent from the politics of the day. In 1902 Adolphe appointed his son William as Lieutenant-Representative. He died in 1905 at his summer home, Schloss Hohenburg in Lenggries, and in 1953 was buried in the crypt of the church of Schloss Weilburg.

On 31 January 1844, Adolphe married firstly in St. Petersburg Grand Duchess Elizabeth Mikhailovna of Russia, niece of Emperor Nicholas I of Russia. She died less than a year afterwards giving birth to a stillborn daughter. Adolphe built the Russian Orthodox Church of Saint Elizabeth 1847 to 1855 as her funeral church.

On 23 April 1851, he remarried in Princess Adelheid-Marie of Anhalt-Dessau. They had five children, of whom only two lived to the age of eighteen and became prince and princess of Luxembourg:

In 1892, Grand Duke Adolphe conferred the hereditary title Count of Wisborg on his Swedish nephew, Oscar, Prince Bernadotte, who had lost his Swedish titles after marrying without his father's approval. Wisborg (also spelled Visborg) in the ruins of an old castle in the city of Visby within Oscar's former Dukedom of Gotland, but the title itself was created in the nobility of Luxembourg.

On April 20, 1842, the Adelsverein, Society for the Protection of German Immigrants in Texas, was organised in the Grand Duke's castle at Biebrich on the Rhine. He was named the Protector of the organisation. The Verein was responsible for the large emigration of Germans to Texas in the 19th Century, and on January 9, 1843, established the 4,428 acre Nassau Plantation in Fayette County, Texas and named it after the Grand Duke.[2][3] 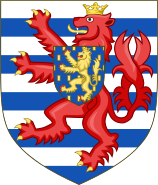