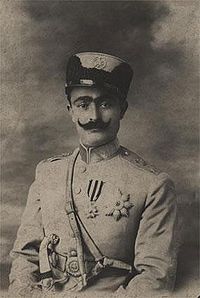 Sepahbod Ahmad Amir-Ahmadi (1884 – 1974) was a military leader and cabinet Minister of Iran.

Born in 1884 in Isfahan, he is one of the planners of the coup d'état of Reza Pahlavi and Seyyed Zia'eddin Tabatabaee against the Qajar dynasty. He is the first person to receive the rank of "sepahbod" (corps general or lieutenant general) under Reza Shah Pahlavi.

He served as Minister of War in the cabinet of Ali Soheili in 1942, and Abdolhosein Hazhir in 1948.

He also served as Senator in the Majlis.

It was said he was the only man Reza Pahlavi truly respected and feared. His sister was married into the Pessian family, and after the assassination of Colonel Pessian, she arranged for his body to be hidden from Reza Pahlavi.

Retrieved from "https://military.wikia.org/wiki/Ahmad_Amir-Ahmadi?oldid=4506474"
Community content is available under CC-BY-SA unless otherwise noted.