The Alenia Aermacchi M-346 Master is a military transonic trainer aircraft. The design of the plane is based on the Yak-130, developed by Yakovlev and Aermacchi as a joint venture.

In 1993, Aermacchi signed an agreement to partner with Yakovlev on the new trainer the firm had been developing since 1991 for the Russian Air Force. The resulting aircraft first flew in 1996 and was brought to Italy the following year to replace the aging MB-339. At the time, the aircraft was marketed as the Yak/AEM-130, however, by 2000, differences in priorities between the two firms brought about an end to the partnership, with each developing the aircraft independently. A Russian version is also being pursued by Yakovlev and Sokol, under a different time schedule.

The M-346 is a highly modified version of the aircraft the joint venture was producing, and uses equipment exclusively from Western manufacturers. The first prototype rolled out on 7 June 2003 and flew for the first time on 15 July 2004.

In January 2005, the Greek Ministry of Defence signed a Memorandum of Understanding (MOU) to become a partner in the programme and, in 2006, Aermacchi signed an industrial cooperation agreement with Hellenic Aerospace Industry.

In July 2007, the M-346 flew to the United Arab Emirates for hot weather tests and operational evaluation by the UAE Air Force.

In March 2008 the Chilean ENAER signed a Memorandum of Understanding (MOU) with Alenia Aermacchi at the FIDAE air show.[1]

In May 2008 Boeing signed a Memorandum of Understanding to cooperate on the marketing, sales, training and support of two Aermacchi trainers, the M-346 and the M-311.[4]

The development of a full-mission simulator for the M-346 has been awarded to CAE and is under development.[5]

The M-346 is designed for training combat pilots for front line fighter aircraft. It is capable of transonic flight without using an afterburner, which is designed to reduce acquisition and operating costs. Two engines and triple-quadruple redundant systems enhance reliability.

The aerodynamic design of the M-346 uses vortex lift to provide manoeuvrability and controllability at very high angle of attack (up to 40° degrees) using a fly-by-wire control system.

The aircraft is powered by two Honeywell F124 engines, and uses a digital flight control system by Teleavio/Marconi in collaboration with BAE Systems, Dowty and Microtecnica for actuators.

The new IBC (Industrial Baseline Configuration) prototype includes a new air brake just behind the cockpit, similar to the Sukhoi Su-30, new landing gear and some structural changes, with the use of more titanium and composite parts in order to reduce weight and production costs. As a result, the prototype weighs 780 kg less than the existing model, providing faster acceleration and climbing, increased maneuverability and max speed, as well as improved fuel capacity (200 kg) and cockpit visibility.

On 20 June 2011, a Military Type Certification was granted to Alenia Aermacchi for the M-346 Master by the General Directorate for Aeronautical Armaments of the Italian Ministry of Defence in Rome. In order to complete the certification process, the M-346 development aircraft made 180 test flights, totalling 200 flights, over the previous five months and completed over 3,300 test points.[6]

The Italian Air Force intends to acquire a first batch of 15 low rate production M-346 aircraft.[7] On 18 June 2009, Alenia Aermacchi announced they had received an order for the first six with an option for nine more.[8]

The M-346 was named the winner of a competition by the United Arab Emirates at the IDEX 2009 defense show in Abu Dhabi on 25 February 2009.[9] The official said the order involved delivery of 48 aircraft to be used for pilot training and light attack duties. A final request for proposals in 2010 had set the requirement at 20 trainers, 20 aircraft for combat duties, and the remainder would go toward the creation of a formation flying team. However on 27 January 2010, negotiations to sign a contract have reportedly stalled over specifications.[10]

In July 2010, the M-346 was selected by Republic of Singapore Air Force (RSAF) to replace the ST Aerospace A-4SU Super Skyhawks in the Advanced Jet Training (AJT) role, currently based at BA 120 Cazaux Air Base in France.[11][12] And in a press release by the Singaporean Ministry of Defence on 28 September 2010, ST Aerospace had been awarded the contract to acquire twelve M-346 and a ground based training system on behalf of RSAF. As stipulated in the contract, ST Aerospace will act as the main contractor to maintain the aircraft after delivery by Alenia Aermacchi while Boeing would supply the training system. Delivery date is scheduled from 2012 onwards.[13][14][15]

On 18 November 2011 the prototype, which had been on display at the Dubai Air Show crashed after departing Dubai on return to Italy.[16]

On 16 February 2012, the M-346 was selected by the Israeli Air Force (IAF) as its main training jet to replace the McDonnell Douglas A-4H/N Skyhawk, which has served the IAF for over 40 years.[17][18] On 19 July 2012, a contract was signed between Alenia Aermacchi and the Israeli Ministry of Defence to supply 30 M-346 advanced jet trainers, with the first delivery expected in the middle of 2014.[19] In Israeli service, the Israeli Air Force announced on 2 July 2013 that the M-346 would be renamed as the Lavi, after the IAI Lavi which was cancelled in 1987.[20]

In the United States, Alenia Aermacchi plans on bidding the M-346 Master for the United States Air Force's T-X program to replace the aging Northrop T-38 Talon. The company had initially considered submitting the aircraft as the prime contractor, but changed its mind in 2010. The company also rebranded the aircraft as the T-100 Integrated Training System for the competition. Alenia anticipates moving the final assembly location from Italy to the United States if it wins the competition. About 350 aircraft are expected to be ordered to replace the T-38, but further purchases could push the overall purchase to over 1,000.[21] In January 2013, Alenia Aermacchi signed a letter of intent with defense contractor General Dynamics to compete for the T-X program business. Under the agreement, General Dynamics C4 Systems will serve as prime contractor for the M-346 and related training systems.[22]

The Advance European Pilot Training (AEPTJ) program—also unofficially called Eurotraining -- a consortium of 12 European nations to give advance & lead-in fighter training with a common core course and training provided by a common aircraft—has contacted Alenia Aermacchi through the European Defence agency in 2010, for further information on the M-346. But according to Aleni Aermacchi, the AEPTJ has a low priority and "... progress has been slow." [23]

On 11 May 2013, an Alenia-operated M346 crashed near the village of Piana Crixia, Italy, during a test flight. The pilot was able to eject successfully and survived the crash, but received serious injuries.[24]

On 23 December 2013 it was announced that Poland had selected the M-346 to meet a requirement for an advanced jet trainer, it is expected to sign a contract in early 2014 for eight aircraft.[25] 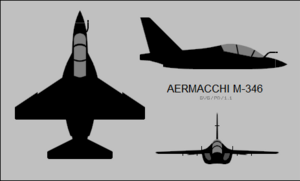 Retrieved from "https://military.wikia.org/wiki/Alenia_Aermacchi_M-346_Master?oldid=4785973"
Community content is available under CC-BY-SA unless otherwise noted.