Manoel de Vilhena was a Portuguese aristocrat of royal descent, son of Dom Sancho Manoel de Vilhena, 1st Count de Vila Flor, and first wife Ana de Noronha, and a remote uncle of the Duke of Terceira. Although most Grand Masters of the Order of Saint John were known to keep aloof from the Maltese populace, Vilhena was loved by the Maltese as he strived to better their lot and also set up a number of charitable institutions. To meet the demand for housing and accommodation in Valletta he laid the plans for the building of a suburb in the neighbourhood, Floriana, where his statue still stands today in Pope John XXIII Square. He built Fort Manoel in Marsamxett Creek. In 1731, he built the Manoel Theatre which is believed to be the second oldest theatre in Europe and is still in use today. His tomb in the Knights' Cathedral St John's Co-Cathedral is considered the largest and most sumptuous of all the Grand Masters' tombs. 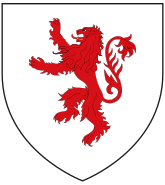 Coat of arms of Floriana since c.2008
Add a photo to this gallery

Retrieved from "https://military.wikia.org/wiki/António_Manoel_de_Vilhena?oldid=5403057"
Community content is available under CC-BY-SA unless otherwise noted.