The Ivorian military has its roots in the colonial armed forces of French West Africa, which were headquartered in Dakar, Senegal but possessed bases in several distinct military regions. Most Ivorian recruits who joined the colonial army were assigned to Senegalese units during this period.[2] They served with distinction during both world wars, with 20,000 Ivorian soldiers fighting for the French during World War I and another 30,000 during World War II.[2] In 1950, the French government began the process of setting up a specific defence force for the colony, consisting of four infantry companies and a light armoured unit.[2]

The Ivory Coast became independent on 7 August 1960. In April 1961, the new government signed the Franco-Ivorian Technical Military Assistance Accord with France, which compelled the latter to assist with the formation of a new national military.[2] It also authorised the continued presence of French troops based in Port-Bouët, and permitted the government to call on French military assistance in the event of external aggression or major internal unrest.[3] By the end of 1962, the fledgling Ivorian armed forces had expanded rapidly into 5,000 soldiers attached to four battalions. Most of the initial recruits were drawn from the defunct colonial military establishment and had served in various French units, particularly the marine regiments.[2] They were armed with old equipment donated by France, including two Max Holste Broussard monoplanes, a single Douglas DC-3 cargo aircraft, fifteen M8 Greyhound armoured cars, and even a SC-497-class submarine chaser.[4] Conscription was instituted, although the large number of volunteers and low manpower requirements ensured it was only applied selectively.[2] Some of the senior positions in the officer corps and Ministry of Defence continued to be held by French nationals.[2]

Since the Ivory Coast could ill afford to divert funds from its economic development programmes into the armed forces, and was already dependent on France for its external defence, the military establishment remained quite modest from 1961 to 1974.[2] Defence spending spiralled upwards between 1974 and 1987, and the number of personnel serving with the armed forces increased to 14,920 men.[2] During this period, the air force and navy embarked on a significant modernisation campaign.[4] An international merchant marine training academy was built in Abidjan and trained personnel from several Economic Community of West African States (ECOWAS) governments.[2]

In 1997, a collapse in civil-military relations became evident when President Henri Konan Bédié dismissed popular general Robert Guéï on suspicion of disloyalty.[5] Two years later, an army mutiny led by disgruntled recruits and junior officers escalated into a major coup d'état which ousted Bédié and installed Guéï in his place.[5] Guéï subsequently stood for office during a subsequent presidential election, although he attempted to annul the election results when Laurent Gbagbo secured the popular vote.[6] This triggered a civil revolt in Abidjan and two days of street battles between Gbagbo supporters and soldiers loyal to Guéï.[6] Most of the armed forces remained neutral until the third day, when the army's elite units and the gendarmerie announced they would recognise Gbagbo as president of the republic.[6] Guéï conceded defeat, going into exile on October 29, 2000.[6]

In September 2002, the Ivory Coast endured a second army mutiny, this time by 750 Muslim soldiers who seized Bouaké, citing religious discrimination and grievances against the predominantly Christian government.[7] The mutineers later took control of most of the northern administrative regions, carrying out a brutal campaign of ethnic cleansing and plunging the country into civil war.[8] For a number of years, troops dispatched by France, ECOWAS, and a United Nations Operation in Côte d'Ivoire (ONUCI) effort enforced a buffer zone between the south and the rebel-held north.[8]

President Gbagbo repeatedly demanded France assist him in crushing the rebel forces.[9] France maintained it would not take sides in the civil war, but allowed Ivorian military aircraft to cross the buffer zone and attack rebel positions.[9] In November 2004, an Ivorian pilot targeted a French base during an air strike on Bouaké, killing nine French soldiers. The French retaliated by launching a follow-up operation to destroy the Ivorian Air Force.[9]

In March 2011, a rebel coalition, the Forces Nouvelles de Côte d'Ivoire, launched a renewed offensive on the south with French support, sparking a second civil war.[10] The Ivorian army was quickly overwhelmed, and Gbagbo deposed by the rebels.[10] The Forces Nouvelles established a new national military, known as the Republican Forces of Ivory Coast (FRCI).[10]

Integration problems arising from the incorporation of various rebel factions into the FRCI, as well as former Gbagbo loyalists, continue to persist.[11] In 2014, some army units launched an abortive mutiny over wage disputes. The crisis ended when the Ivorian political leadership agreed to a new financial settlement with the FRCI.[11] A second mutiny occurred on January 7, 2017, with troops in Bouaké demanding higher salaries and improved living conditions; this resulted in a second financial settlement.[11] 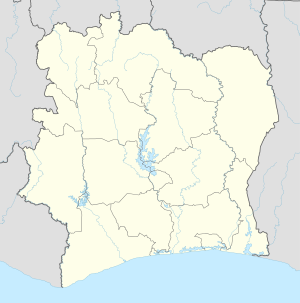 The Ivorian army had three infantry battalions, an armoured battalion, an artillery battery, and seven specialist companies in 1993.[13] The effective strength of the army was about 3,000 troops for the first ten years of Ivorian independence, increasing to over 8,000 in the mid-1980s before declining steadily to about 5,500.[2] It has always remained the largest branch of the armed forces.[14]

As of July 2011, General Soumaïla Bakayoko is the chief of staff of the army, and colonel-major Gervais Kouakou Kouassi is the Chief of the Gendarmerie.[15]

As of October 2011, previously active units around Abidjan reportedly included the:[16]

The 2nd Infantry Battalion appears to have been based at Daloa for some time. A 2003 change of command ushered in the 16th commander of the unit,[17] and there are also reports from 2009 and 2011.

The Ivorian army has traditionally been equipped with French weapons, most of which were delivered in the 1980s under generous military grants from Paris.[2] During Laurent Ghagbo's administration, large quantities of second-hand Soviet arms were acquired from Angola, Ukraine, and Belarus.[4]

After achieving independence from France in 1960, Ivory Coast maintained strong links with France through bilateral defence agreements.[23] French training and operating techniques has been used since the establishment of the air force. The first equipment supplied included three Douglas C-47's and seven MH.1521 Broussard STOL utility aircraft in 1961. The first jet aircraft to enter service in October 1980 were six Alpha Jet CI light attack and advanced training aircraft; six more were ordered, but were subsequently cancelled. However, another was purchased in 1983.

The 1979 air force had only transport and liaison aircraft. In 1987, the Library of Congress Country Study said that the Air Force's official name, Ivoirian Air Transport and Liaison Group (Groupement Aérien de Transport et de Liaison—GATL), 'reflects an original mission focused more on logistics and transport rather than a combat force.'

In 2004, following an air strikes on French peacekeepers by Ivorian forces, the French military destroyed all aircraft in the Air Force of Ivory Coast. Gbagbo had ordered air strikes on Ivorian rebels. On 6 November 2004, at least one Ivorian Sukhoi Su-25 bomber attacked a French peacekeeping position in the rebel town of Bouaké at 1 pm, killing nine French soldiers and wounding 31.[24] An American development worker, reported to have been a missionary, was also killed. The Ivorian government claimed the attack on the French was unintentional, but the French insisted that the attack had been deliberate.[25]

Several hours after the attack French President Jacques Chirac ordered the destruction of the Ivorian air force and the seizure of Yamoussoukro airport. The French military performed an overland attack on the airport, destroying two Sukhoi Su-25 ground attack aircraft and three Mi-24 helicopter gunships.[26] Two more military helicopters were destroyed during combat in the skies over Abidjan. France then flew in 300 troops and put three Dassault Mirage F1 jet fighters based in nearby Gabon on standby.[25]

Since then, the Air Force of Ivory Coast has been rebuilt.[26] In 2007, Aviation Week & Space Technology reported a total of six aircraft in service: one Antonov An-32 tactical transport, one Cessna 421 Golden Eagle utility aircraft, two Eurocopter SA 365 Dauphin helicopters, one Gulfstream IV VIP aircraft, and one Mil Mi-24 attack helicopter.[27] It is unknown whether any of these aircraft were truly operational. In addition, Deagel.com reported two Mikoyan-Gurevich MiG-23 attack aircraft.[28]

Ivory Coast has a brown-water navy whose mission is coastal surveillance and security for the nation's 340-mile coastline.[14] The operational capability of the navy was severely degraded due to the diversion of resources to the army and air force during the civil wars, and it remains incapable of conducting operations beyond the general vicinity of Abidjan.[14]

A mutual defense accord signed with France in April 1961 provides for the stationing of French Armed Forces troops in Ivory Coast.[32] The 43rd Marine Infantry Battalion of the French Army's Troupes de Marine (fr:43e bataillon d'infanterie de marine) was based in Port Bouet adjacent to the Abidjan Airport from 1979 and had more than 500 troops assigned until 2011, when it appears to have been disbanded. The French military also maintains a force as part of Operation Licorne.

From summer 2011, Operation Licorne, the French force, previously over 5,000 strong, is roughly 700, and consists of Licorne headquarters, Battalion Licorne (BATLIC), seemingly made up of elements of the 2nd Marine Infantry Regiment and the Régiment d'infanterie-chars de marine, and a helicopter detachment.[12]

The United Nations has maintained the peacekeeping mission ONUCI in the country since 2004. On 28 February 2011 ONUCI consisted of 7,568 troops, 177 military observers, and numerous international civilians and Police; the mission had received helicopter and infantry reinforcement from UNMIL during the stand-off since the late 2010 elections which had been won by Alassane Ouattara.[33]

Since independence, the Ivory Coast has maintained a paramilitary gendarmerie force with a mandate to assist the police with law enforcement duties in the country's rural districts.[14] However, it may also be deployed alongside the army to quell internal unrest.[14] For a number of decades, the size of the Ivorian National Gendarmerie remained consistent at around 4,000 to 5,000 personnel, supervised by a commandant.[13] It underwent a massive expansion following the outbreak of the First Ivorian Civil War, increasing to about 12,000 personnel commanded by a major general.[14] Gendarmes undergo training as cadets at a National Gendarmerie Academy.[2]

The National Gendarmerie maintains an investigative branch, the Brigades de Recherches, which has been accused of various human rights abuses, including extrajudicial killings and unlawful detention.[34]

Retrieved from "https://military.wikia.org/wiki/Armed_Forces_of_the_Republic_of_Ivory_Coast?oldid=5448965"
Community content is available under CC-BY-SA unless otherwise noted.