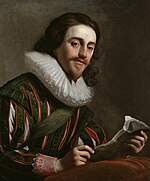 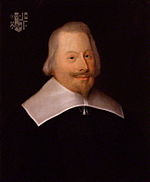 The Army Plots of 1641 were two real or alleged attempts by Royalist supporters of Charles I of England to use the army to crush dissent among members of the English parliament in the run-up to the English Civil War. The plan was to move the army stationed in York down to London and to use it to reassert royal authority. It was also claimed that the plotters were seeking French military aid and that they planned to seize and fortify towns to become Royalist strongholds.

The exposure of the plots by leading Parliamentarians such as John Pym allowed the Parliament faction to gain the upper hand by imprisoning or forcing into exile many of the king's supporters, including his wife Henrietta Maria. According to Conrad Russell, it remains unclear "who plotted with whom to do what" and that "Charles I's plots, like his grandmother's lovers, are capable of growing in the telling".[1] Nevertheless, there were clearly real attempts to negotiate the movement of troops to London.

The so-called "first army plot" unfolded between March and May 1641. It emerged after discontent in the English army with parliament grew following the grant of funds for the Scottish army which had earlier been intended for the English. George Goring proposed that the army at York should march south to threaten Parliament. The poet-soldiers William Davenant and John Suckling, along with Henry Jermyn, supported the move and hoped to occupy the Tower of London.[1] This was linked to a plan to free the king's supporter, Thomas Wentworth, 1st Earl of Strafford, who had been imprisoned in the Tower by Parliament. Meanwhile, Henry Percy was also independently planning to petition Parliament for financial support for the army.

At a meeting with the king and queen, Percy and Goring discussed the proposal to bring the main army south.[1] Rumours began to circulate that the king would take command of the army and that French troops would be sent in support. However, the main body of the soldiery refused to accept the proposals and so it was abandoned. Goring told Mountjoy Blount, 1st Earl of Newport, of the plans. Blount passed on the information indirectly to leading Parliamentarian John Pym in April. Davenant and Suckling, however, still planned to seize the Tower. Soldiers loyal to the king were placed in position, but the situation soon became known to Parliament, and a stand-off developed. Soldiers loyal to Parliament quickly took control of the Tower.

In the ensuing investigation, much was made of claims that the king and queen were plotting to obtain French military support. It was claimed that the queen had diverted her personal funds to the port of Portsmouth, of which Goring was in command, in order to turn it into a Royalist fortress.[2] Evidence was also produced that the king was gathering funds to win military men over to his side.[1]

As soon as the plot was discovered Percy sought to flee to France, but was assaulted and wounded by country people in Sussex. He was forced to go into hiding. He wrote a letter to his brother, giving an account of events, which the Parliamentarians later used as proof of the reality of the plot. After his capture, he tried to blame others. Royalists condemned him for betraying the King.[3] Goring too distanced himself from the plans of Davenant and Suckling. His submission to Parliament allowed him to retain control of Portsmouth. Davenant, Jermyn and Suckling all fled to France, where Suckling died shortly afterwards, probably by suicide.[4] The failure of the plot contributed to the condemnation and execution of Strafford as a traitor, and alienated many moderate Royalists from the king.[1]

A few months after the first plot, there were claims that a second plot to bring the army south in support of royal power was in motion. In May, the king had sent Daniel O'Neill to negotiate with army leaders, suggesting that they might move their forces south to "protect" both the king and moderate parliamentarians.[5] O'Neill also sought to ensure that Scottish leaders would remain neutral (Scotland was still a separate kingdom, but Charles was king in both England and Scotland). Pym sought to rally support to put local militias on alert against the proposed move, which again failed to find sufficient support among army commanders.[6]

William Legge, who had been questioned after the first plot, was directly involved with the second. Along with two other M.P.s, Henry Wilmot, 1st Earl of Rochester was expelled from the Long Parliament in December 1641 for alleged complicity in the Second Army Plot and was placed under arrest. O'Neill escaped to France, but soon returned and was arrested and imprisoned. This time Percy was also expelled from the House of Commons in December, after which he too left for France.[3]

The two army plots had the effect of hardening the differences between the two sides, and ultimately of strengthening the Parliamentary cause by allowing Parliament to gauge the extent of support for the king among army commanders. Pym was also able to establish the conditions for militias and pro-Parliamentary factions to defend towns potentially threatened by the Royalists. Leading Royalists were either forced into exile or deprived of power, further strengthening Parliament's hand.

The events made it increasingly clear that the king would not be able to impose his will with a threat of force. His attempt to arrest his leading opponents in Parliament without army backing in January 1642, was an abject failure.[7] He fled from London to his strongholds in the Midlands a few days later.[8] The queen left the country. When Charles made clear his intention to fight, Goring, still in control of Portsmouth, immediately declared in favour of the king.[8] Jermyn and Davenant both returned to England to join the king. O'Neill escaped from prison in 1642 dressed as a woman, and also joined the Royalists. Percy and Wilmot joined the Royalists, but eventually fell out of Charles' favour for advocating negotiations with Parliament.