In the United States Marine Corps, the aviation combat element or air combat element (ACE) is the air arm of the Marine Air-Ground Task Force (MAGTF). It provides rotary-wing, tiltrotor, and fixed-wing aircraft, support equipment, pilots, maintenance personnel, as well as command and control assets to the commander.[1]

Role within the MAGTF[]

The majority of aircraft usage within the MAGTF is for close air support or transport for the ground combat element (GCE) or logistics combat element (LCE), however, other specialized missions are available. The six main functions include: assault support, anti-air warfare, offensive air support, electronic warfare, control of aircraft and missiles, and aerial reconnaissance.[2]

The size of the ACE varies in proportion to the size of the MAGTF. A Marine Expeditionary Force has a Marine Aircraft Wing or MAW. A Marine Expeditionary Brigade holds a Marine Aircraft Group or MAG, reinforced with a variety of aircraft squadrons and support personnel. The various Marine Expeditionary Units command a reinforced squadron, with various types of aircraft mixed into a single unit (known as a composite squadron). Generally, MEF postings are permanent, while MEBs and MEUs rotate their ACE, GCE, and LCE twice annually. 1st and 3rd Marine Aircraft Wings are unique in that they are subordinate to III MEF and I MEF, respectively, while all other equivalent units numerical designators match the MEF to which attached. 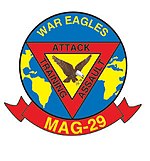 ACE of I Marine Expeditionary Force