The President of Bangladesh is the Commander-in-chief of the military, the Armed Forces Division (AFD) is the principal administrative organisation by which military policy is formulated and executed; the Ministry of Defence (MoD) does not exercise any operational or policy authority over the Armed Forces. Currently, both AFD and MoD are headed by the Prime Minister of Bangladesh. To coordinate military policy with foreign and intelligence policy, both the president and the prime minister are advised by a six-member advisory board which consists of the three military services' Chiefs of Staff, the Principal Staff Officer of the Armed Forces Division, and military secretaries to the president and the prime minister. The directors general of the NSI, the DGFI and the BGB also serve in an advisory capacity, when invited.[6][7]

The Armed Forces Day is observed on 21 November.[8] Official functions are held at the "Bangabhaban", Armed Forces Division Headquarters, Dhaka Cantonment, and at every military installation throughout the country.[9]

Bangladesh's military history is intertwined with the history of a larger region, including present-day India, Pakistan, Nepal, Bhutan and Myanmar. The country was historically part of Bengal– a major medieval power in South Asia and Southeast Asia.

The early military history of the Indian subcontinent included Alexander's invasion of India, which was deterred by the might of Gangaridai Kingdom that was located in present-day Bangladesh, according to most historians. Prince Vijaya of the Vanga Kingdom led a naval expedition to conquer Sri Lanka. The Kalinga War was a notable event of the Mauryan Empire in the eastern Indian subcontinent. The ancient Indian armies included chariots.

The Bengal region crystallized as an imperial power during the 8th-11th century Pala Empire. The Pala emperors actually originated from Varendra, a Northern Bangladeshi region. Many of the empire's cities are located in Bangladesh. The Pala military had a large war elephant cavalry, according to Arab historians. The Palas recruited mercenaries from different parts of the Indian subcontinent. Pala conquests extended across North India. The Palas were engaged in a struggle over the Kannauj Triangle with the Gurjara-Pratiharas and Rashtrakutas.

The Muslim conquest of the Indian subcontinent heralded new military doctrines and hardware, including well-developed artillery. The Delhi Sultanate conquered Bengal in 1204 under the leadership of Bakhtiar Khilji, who later proceeded with an Islamic invasion of Tibet. In Bengal, the Delhi Sultanate displaced the Sena dynasty. Sultan Iwas Khilji (1212-1227) was responsible for founding the Bengal navy during the sultanate period.[10] The chief of the admiralty had various responsibilities, including shipbuilding, transporting personnel, elephants and equipment; recruitment and collecting tolls at ghats.[10] The sultanate period saw the settlement of many military officers and soldiers from North India, Central and West Asia and the Horn of Africa. The settlers included Rajputs and Pashtuns.

Sher Shah Suri conquered Bengal in the 16th century and made it part of the Suri Empire. Sher Shah Suri also renovated the Grand Trunk Road around Sonargaon. His successors later revived the Bengal Sultanate.

After the Bengal Sultanate collapsed in the late 16th-century, the aristocrat Isa Khan led a confederation of zamindars (known as Baro-Bhuyan) to challenge the Mughal invasion of Bengal, often with naval battles on the Padma River, Meghna River and Jangalbari Fort in Egarasindhur. Isa Khan defeated Mughal governors Khan Jahan I in 1578, Shahbaz Khan in 1584 and Man Singh I in 1594. His son and successor Musa Khan continued to lead the confederation until succumbing to the Mughals led by Islam Khan I in 1610.[13]

Bengal remained relatively stable and prosperous during the 17th century. A key challenge during the early Mughal period was piracy from the Kingdom of Mrauk U and the Portuguese settlement in Chittagong. In 1666, the Mughal Empire-Kingdom of Mrauk U War expelled the Arakanese and Portuguese from Chittagong. The Mughals also engaged in the Ahom-Mughal conflicts. During the 18th century, Bengal endured the invasions by the Maratha Army- the military of the Maratha Confederacy. It fell to the conquest of the British East India Company after the Battle of Plassey.

There was strong opposition to British involvement against the Turkish War of Independence, as both Mustafa Kemal Atatürk and the Ottoman caliphate enjoyed support in Bengal.

With the partition of India on 15 August 1947 the territory constituting modern Bangladesh was partitioned from the province of Bengal as East Bengal, joining the newly created state of Pakistan. Ethnic and sectional discrimination prevailed in all sectors of the state. Like other government sectors Bengalis were under-represented in the Pakistan military too. Officers of Bengali origin in the different wings of the armed forces made up just 5% of overall force by 1965.[14] West Pakistanis believed that Bengalis were not "martially inclined" unlike Pashtuns and Punjabis; the "Martial Races" notion was dismissed as ridiculous and humiliating by Bengalis.[14] Moreover, despite huge defence spending, East Pakistan received none of the benefits, such as contracts, purchasing and military support jobs. The Indo-Pakistani War of 1965 over Kashmir also highlighted the sense of military insecurity among Bengalis as only an under-strength infantry division and 15 combat aircraft without tank support were in East Pakistan to thwart any Indian retaliations during the conflict.[15][16]

The East Bengal Regiment was formed on 15 February 1948 following Pakistan's independence and transition from post British rule, composed exclusively of men from the western part of the country. The first East Bengal Regiment was formed of the Bengali members of the British Indian Army Pioneer Corps and Bihar Regiment of the abolished British-Indian army. Between 1948 and 1965, a total of eight battalions of EBR were raised.[17][18]

Following the victory of the Awami League in the 1970 elections, then-president General Yahya Khan refused to appoint its leader Sheikh Mujibur Rahman as the prime minister and launched a brutal attack named Operation Searchlight on the civilians of the then East Pakistan, using the Pakistani army to repress political movements.[19] Figures of people killed by Pakistani forces vary from a minimum of around 300,000 to a maximum of around 3 million.[20][21] Responding to Mujib's call for rebellion, many students, workers and other civilians mutinied against Pakistan and raised the Mukti Bahini, a guerrilla force. Later on, many Bengali officers and units from Pakistan Army and East Pakistan Rifles mutinied against their West Pakistani counterparts and joined the Mukti bahini.[22][23][24] On 17 April 1971, Muhammad Ataul Gani Osmani took oath as the commander-in-chief of Mukti bahini. While the war raged on, the necessity of a well-trained armed force was always felt. During the first Bangladesh Sector Commanders Conference, held from 11 to 17 July 1971, the Bangladesh Forces started its journey composed of the revolting Bengali members of the Pakistan Army and EPR.[25] In this historic conference the field command structure, sector reorganization, reinforcement, appointment of field commanders and tactics of warfare were decided upon and carried out. On 21 November 1971, the Bangladesh Forces was divided into three separate services as Bangladesh Army, Bangladesh Navy and Bangladesh Air Force.

The Bangladesh Forces received modest assistance from the Indian Government soon after the start of the war.[26] On 3 December 1971, India-Pakistan war broke out and Indian troops enter Bangladesh allied with the Bangladesh Armed Forces.[27] On 16 December 1971 the Pakistani Military force in Bangladesh surrender to a joint force of Indian and Bangladesh forces.[28]

The newly formed Bangladeshi armed forces incorporated some of the units and guerrillas of the Mukti Bahini.[29] Gen. Osmani, who had led the Mukti Bahini was appointed the General of the Bangladesh armed forces.[30] For many years, there was active discrimination in favour of the inductees from the Mukti Bahini against those Bengali officers who had continued service in the Pakistani armed forces or had been detained in West Pakistan.[29][31] A group of angered officers assassinated the president Sheikh Mujib on 15 August 1975 and established a regime with politician Khondaker Mostaq Ahmed as President of Bangladesh and new army chief Maj. Gen. Ziaur Rahman.[31] The military itself was subject of divisions as Mujib's assassins were overthrown by the pro-Mujib Brig. Gen. Khaled Mosharraf on 3 November, who himself was soon overthrown by a socialist group of officers under Col. Abu Taher on 7 November who returned Ziaur Rahman to power—an event now called the Sipoy-Janata Biplob (Soldiers and People's Coup).[32] Under the presidency of Ziaur Rahman, the military was reorganised to remove conflicts between rival factions and discontented cadre.[33] However, Ziaur Rahman was himself overthrown in a 1981 coup attempt,[34] and a year later, Lt. Gen. Hossain Mohammad Ershad took power from the elected government of president Abdus Sattar. The military remained the most important force in national politics under the regimes of Ziaur Rahman and later Hossain Mohammad Ershad until democracy was restored in 1991.[33]

Until a peace accord was signed in 1997, the Bangladeshi military engaged in counterinsurgency operations in the Chittagong Hill Tracts fighting the Shanti Bahini separatist group. In 2001, Bangladeshi military units engaged in clashes with the Indian Border Security Force (BSF) along the northern border.[35] Controversy also emerged over possible links maintained by the Bangladeshi military and intelligence agencies with Islamic terrorist groups and anti-India secessionist outfits.[36][37][38] Several projects and schemes aiming to expand and modernize the Bangladeshi armed forces were launched by the government of former Prime Minister Begum Khaleda Zia.

Forces Goal 2030 was launched by the government of Prime Minister Sheikh Hasina to secure new equipment for the Bangladeshi military.

Standoffs have occasionally occurred at the Bangladesh-Myanmar border, including in 1991 and 2008. Most of the standoffs took place when Myanmar attempted to force Rohingyas into Bangladesh. In 2008, the two countries deployed warships after Myanmar attempted to explore a disputed Bay of Bengal seabed for oil and gas. The dispute was resolved at an international tribunal in 2012. Bangladesh and Myanmar have also conducted counter-insurgency operations on the border.

literally, "The Most Valiant Hero"), the highest gallantry award

literally, "Symbol of Bravery or Idol of Courage"), the fourth highest gallantry award

Bangladesh has consistently made large contributions to United Nations peacekeeping operations. As of May 2007, Bangladesh had major deployments in Democratic Republic of Congo, Liberia, Lebanon, Sudan, Timor-Leste and Cote d'Ivoire.[44] With 10,736 troops deployed, it ranks first in personnel contributions to UN peacekeeping.[45] The government declined to participate in Iraq on a request from the United States. The deployment to Liberia began in October 2003 and has remained at a level of about 3200 who are participating in peacekeeping, charitable activities and infrastructure development.

Officers are trained and educated for three years at the Bangladesh Military Academy, Bhatiary, Bangladesh Naval Academy at Patenga, both located in Chittagong and Bangladesh Air Force Academy located in Jessore. For advance training during their career, officers are sent to Bangladesh Defence Services Command and Staff College at Mirpur, while senior officers attend the National Defense University for Armed Forces War Course. Many attend the Military Institute of Science and Technology while serving. Officers of the Army Medical Corps are recruited after graduation from both military or civil medical colleges. They undergo basic military training at Bangladesh Military Academy followed by professional training in medical corps centre and Armed Forces Medical Institute. Recently cadets of Armed Forces Medical College also started joining the services directly.[46]

Bangladesh military ranks, essentially corresponds to those used by the armed forces of the commonwealth nations.

The rank insignia for commissioned officers for the Armed forces respectively.

Cantonments are where Bangladesh Army personnel work, train, and live.[50]

Bangladesh has made a long term modernisation plan for its Armed Forces named Forces Goal 2030.[51] The plan includes the modernization and expansion of all equipment and infrastructures and providing enhanced training.[51] 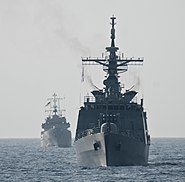 Bangladesh Air Force Mig-29 rushes of for a short mission

Bangladesh Air Force aircraft during an exercise with US Air Force