There are three main components of the BDF:

The Cadet Corps has a pledge and also a song. It started with 3 normal units but today has expanded to 22. These units are grouped into Zones. There are also a band, sea cadet and medical units along with a shooting programme. 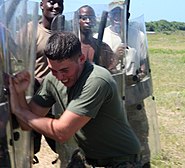 Retrieved from "https://military.wikia.org/wiki/Barbados_Defence_Force?oldid=2396916"
Community content is available under CC-BY-SA unless otherwise noted.