Barker Barracks is a military installation in Paderborn, Germany.

Barker Barracks is located in the east of Paderborn, about two kilometres from the city centre. The barracks is bordered by Driburger Straße to the south, the Berliner Ring to the west, Piepenturmweg to the north-west and a rail line to Paderborn railway station to the north-east.

The installation is a typical example of Nazi-era barracks built in the 1930s. The buildings were often three-storey with a high ground floor and two higher floors. The farm buildings are two-storey with higher storey heights for kitchen and dining room use. Separate from these areas there is a technical or a functional area. Here, buildings are built that were specifically needed by the accommodated units, such as halls for motorized vehicles, guns and workshops. In addition, there is a staff building and an officers' mess.

The barracks, with approximately 54 hectares of land, can be divided from south to north into three building zones. In the south is the first building zone with ten symmetrical crew quarters in north-south orientation and two buildings in east-west orientation in which the guard and offices are housed. In the second building zone there are also twenty symmetrically arranged buildings, which, like the crew quarters, are set up in north-south orientation. The third building zone in the north consists of workshops of various sizes as well as maintenance halls, a church and a fuel depot. The crew quarters as well as the guard and the offices form the main entrance of Barker Barracks.[1]

Under Wermacht control, in the 1930s, the barracks was home to the SS (replacement battalion). Known as panzerkaserne, it was built to accommodate Tiger Tanks.

A photograph of a street and buildings inside Barker Barracks c1980. Taken from a high vantage point in the main HQ building it is looking eastwards.[3] 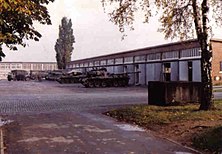 A photograph of A Squadron 3 RTR's tank park inside Barker Barracks c1981. Taken from ground level directly behind the main HQ building it is looking northwards.[4]

A photograph of the HQ building in Barker Barracks Paderborn c2016. To the right of the building is the memorial wall of 35 Engineer Regiment.[5]

For use by the British Army, the barracks was re-named after General Sir Evelyn Barker. Until 1962, Barker Barracks had been home to only a single British Unit. British units stationed in Barker Barracks were:[6][7][8][9]