Bartolomeo Fanfulla's parents, Domenico Alon and Angela Folli, gave him multiple names: Giovanni or Giovanni Battista (in honour of the Evangelical preacher), Bartolomeo (in honour of Bartolomeo Colleoni) and Tito (in honour of the great Roman emperor). Born in the province of Lodi (but for Guicciardini he is allegedly from Parma), Fanfulla almost certainly died 24 February 1525 in the battle of Pavia. He had at least four children (Marc’Antonio, Ambrosio, Giorgio and Domenico) and nine grandchildren.

He was first a soldier of fortune, then knight and finally captain of a flag between 1499 and 1525. They say of him:

There is no important battle fought across the 16th century in which Fanfulla did not fight, first as simple soldier of fortune and then as Captain of a flag (Alfiere) with his Lanza of fifty armed men directly reporting to him and paid by him

Together with Ettore Fieramosca he was the main character of the famous battle of Barletta, which on 13 February 1503 saw thirteen Italian warriors fight against the same number of Frenchmen. Having remained horseless (together with Giovanni Bracalone) during the fight, he fought on food killing the horses of the French jousters. At the end of the battle, he was knighted by the Spanish potestà (chief magistrate) Consalvo di Cordoba. He is one of the main characters of the novel Ettore Fieramosca o La disfida di Barletta[1] (1833), by the politician and man of letters Massimo d'Azeglio, in which the author's phantasy introduces him as an astute, fun and jolly man. The resulting colourful portrait of heroic soldier of fortune gave Fanfulla his fame. Fanfulla is considered one of the symbols of the town of Lodi and of its territory, so much so that a number of local sports clubs take inspiration from his figure: among the most awarded there is the A.S.Ginnastica e Scherma Fanfulla 1874,[2] l'Atletica Fanfulla[3] and the Associazione Calcio Fanfulla 1874.[4] Moreover, the biscuits Amaretti Fanfullini, a typical product of Lodi, owe their name to him.

A famous Italian goliardic song from the 20th century has been also dedicated to Fanfulla: Fanfulla da Lodi.

In the city of Lecce, bronze statue of him by the Italian sculptor Antonio Bortone from Ruffano is found in the square Raimondello Orsini.

Battles he took part in[]

He took part in all the main battles of the 16th century. Always giving proof of his great courage he travelled throughout Italy taking part in:

They have said of him:

Fanfulla from Lodi in the square Raimondello Orsini in Lecce 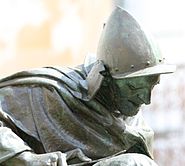 Fanfulla from Lodi in the square Raimondello Orsini in Lecce