Prelude to the battle[edit | edit source]

Two days before the battle, on 14 November (in the Gregorian calendar, 4th in the Julian calendar) the Roman Catholic general Wallenstein decided to split his forces and withdraw his main headquarters back towards Leipzig. He expected no further move that year from the Protestant army, led by the Swedish king Gustavus Adolphus, since unseasonably wintry weather was making it difficult to camp in the open countryside; however, Gustavus Adolphus' army marched out of camp towards Wallenstein's last-known position and attempted to catch him by surprise, but his trap was sprung prematurely on the afternoon of 15 November, by a small force left by Wallenstein at the Rippach stream, about 5–6 kilometres south of Lützen. A skirmish delayed the Swedish advance by two or three hours, thus when night fell the two armies were still separated by about 2–3 kilometres (1–2 miles).

Wallenstein had learned of the Swedish approach on the afternoon of 15 November. Seeing the danger, he dispatched a note to General Pappenheim ordering him to return as quickly as possible with his army corps. Pappenheim received the note after midnight, and immediately set off to rejoin Wallenstein with most of his troops. During the night, Wallenstein deployed his army in a defensive position along the main Lützen-Leipzig road, which he reinforced with trenches. He anchored his right flank on a low hill, on which he placed his main artillery battery.

The day of battle[edit | edit source]

Morning mist delayed the Swedish army's advance, but by 9 am the rival armies were in sight of each other. Because of a complex network of waterways and further misty weather, it took until 11 am before the Protestant force was deployed and ready to launch its attack.

Initially, the battle went well for the Protestants, who managed to outflank Wallenstein's weak left wing. After a while, Pappenheim arrived with 2,000–3,000 cavalry and halted the Swedish assault. This made Wallenstein exclaim, "Thus I know my Pappenheim!". However, during the charge, Pappenheim was fatally wounded by a small-calibre Swedish cannonball. At the same time, Pappenheim's counterattack collapsed. He died later in the day while being evacuated from the field in a coach. 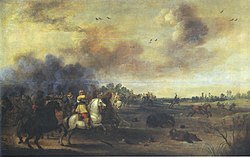 Gustavus Adolphus in the battle of Lützen

The cavalry action on the open Imperial left wing continued, with both sides deploying reserves in an attempt to gain the upper hand. Soon afterwards, towards 1:00 pm, Gustavus Adolphus was himself killed while leading a cavalry charge on this wing. In the thick mix of gun smoke and fog covering the field, he was separated from his fellow riders and killed by several shots.[2] His fate remained unknown for some time. However, when the gunnery paused and the smoke cleared, his horse was spotted between the two lines, Gustavus himself not on it and nowhere to be seen. His disappearance stopped the initiative of the hitherto successful Swedish right wing, while a search was conducted. His partly stripped body[2] was found an hour or two later, and was secretly evacuated from the field in a Swedish artillery wagon.

Meanwhile, the veteran infantry of the Swedish center had continued to follow orders and tried to assault the strongly entrenched Imperial center and right wing. Their attack was a catastrophic failure—they were first decimated by Imperial artillery and infantry fire and then ridden over by Imperial cavalry charging from behind the cover of their own infantry. Two of the oldest and most experienced infantry units of the Swedish army, the 'Old Blue' Regiment and the Yellow or 'Court' Regiment were effectively wiped out in these assaults; remnants from them streamed to the rear. Soon most of the Swedish front line was in chaotic retreat. The royal preacher, Jakob Fabricius, rallied a few Swedish officers around him and started to sing a psalm. This act had many of the soldiers halt in hundreds. The foresight of Swedish third-in-command 'Generalmajor' Dodo zu Innhausen und Knyphausen also helped staunch the rout: he had kept the Swedish second or reserve line well out of range of Imperial gunfire, and this allowed the broken Swedish front line to rally.

By about 3 PM, the Protestant second-in-command Bernhard of Saxe-Weimar, having learned of the king's death, returned from the left wing and assumed command over the entire army. He vowed to win the battle in retribution for Gustavus or die trying, but contrary to popular legend tried to keep the king's fate secret from the army as a whole. (Although rumours were circulating much earlier, it was only the following day that Bernhard collected his surviving officers together and told them the truth.)

The result was a grim struggle, with terrible casualties on both sides. Finally, with dusk falling, the Swedes captured the linchpin of Wallenstein's position, the main Imperial artillery battery. The Imperial forces retired back out of its range, leaving the field to the Swedes. At about 6 pm, Pappenheim's infantry, about 3,000–4,000 strong, after marching all day towards the gunfire, arrived on the battlefield. Although night had fallen, they wished to counterattack the Swedes. Wallenstein, however, believed the situation hopeless and instead ordered his army to withdraw to Leipzig under cover of the fresh infantry.

Strategically and tactically speaking, the Battle of Lützen was a Protestant victory. Having been forced to assault an entrenched position, Sweden lost about 6,000 men including badly wounded and deserters, many of whom may have drifted back to the ranks in the following weeks. The Imperial army probably lost slightly fewer men than the Swedes on the field, but because of the loss of the battlefield and general theatre of operations to the Swedes, fewer of the wounded and stragglers were able to rejoin the ranks.

The Swedish army achieved the main goals of its campaign. The Imperial onslaught on Saxony was halted, Wallenstein chose to withdraw from Saxony into Bohemia for the winter, and Saxony continued in its alliance with the Swedes.[3] A more long-lasting consequence of the battle was the death of the Swedish king Gustavus Adolphus, leader of the Protestant forces. Without him to unify the German Protestants, their war effort lost direction. As a result the Catholic Habsburgs were able to restore their balance and subsequently regain some of the losses Gustavus Adolphus had inflicted on them. Crucially, Gustavus Adolphus's death enabled the French to gain much firmer control of the anti-Habsburg alliance. Sweden's new regency was forced to accept a far less dominant role than they had held before the battle. The war was eventually concluded at the Peace of Westphalia in 1648.

Near the spot where Gustavus Adolphus fell, a granite boulder was placed in position on the day after the battle. A canopy of cast iron was erected over this “Swedes' stone” (German: Schwedenstein) in 1832, and close by, a chapel, built by Oskar Ekman, a citizen of Gothenburg (d. 1907), was dedicated on 6 November 1907.[4][5]

Retrieved from "https://military.wikia.org/wiki/Battle_of_Lützen_(1632)?oldid=4180993"
Community content is available under CC-BY-SA unless otherwise noted.