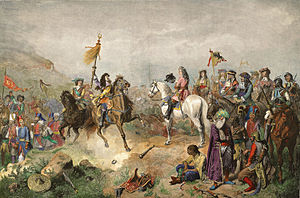 }} The Second Battle of Mohács, also known as the Battle of 'Berg Harsány' (Harsány Mountain),[2][3] was fought between the forces of Ottoman Sultan Mehmed IV, commanded by the Grand-Vizier Sari Süleyman Paşa, and the forces of Holy Roman Emperor Leopold I, commanded by Charles of Lorraine. The result was a crushing defeat for the Ottomans.

The Great Turkish War began with the attack on Vienna in 1683 by the Ottoman army, and was broken by the Battle of Kahlenberg on 12 September 1683. From September 1683 the initiative passed to the imperial troops. In the following years under Charles of Lorraine Imperial Habsburg armies conquered many fortresses (such as Esztergom, Vác, Pest), which were under Ottoman rule, and after the Battle of Buda they laid siege to and took over the former Hungarian capital of Buda. At the end of 1686 the Ottomans made peace overtures; however, the Imperial Habsburgs now saw a chance to occupy and conquer the whole of Hungary and these peace overtures were rejected.[4]

In April 1687 it was decided in Vienna that further military action should be taken. The main army (of about 40,000 troops) under the command of Duke Charles of Lorraine proceeded along the River Danube to Osijek on the River Drava, while a second army (of about 20,000 men) under command of Elector Max Emanuel of Bavaria moved along the River Tisza to Szolnok and towards Petrovaradin. In the middle of July the two imperial armies met on the Danube and either marched overland or along the Drava to Osijek.

In contrast, the Ottoman army (of about 60,000 men) under the command of the Grand Vizier Sari Süleyman Paşa, stayed in front of the main River Drava crossing (with its 8 km long wooden bridge) at Osijek in order to protect it and then fortified this position. When the Imperial Habsburg army arrived, the River Drava divided the two sides. At the end of July the Imperial Habsburg army was able to make a bridgehead on the shores of the river and stood in battle array, in order to challenge the Ottomans. However, the Ottoman army remained passive and was satisfied with artillery bombardments of the weirs on the Drava, the bridges and the riverside.[5]

Because of the terrain Duke Charles of Lorraine could not observe the fortified Ottoman camp clearly in order to command an attack on it. So he decided to wait a few days for the clearing of the bridgehead. For this he was criticized both by his own sub-commanders and by the Emperor Leopold I. This reluctance to attack by his enemy was interpreted by the Ottoman Grand Vizier as a loss of morale by the Habsburg troops. Through skilful maneuvering in early August, he forced the Habsburg army back toward Mohács and towards an Ottoman fortified position. The Ottomans had also built a fortified position at Darda, but this was skilfully hidden among the thick bushes so that it was not visible to the Habsburg army. For this reason Duke Charles of Lorraine did not suspect the presence of the Ottoman army in the vicinity.

On the morning of the 12th August the Duke of Lorraine decided to move to Siklós, because the position and the hard ground there made it more appropriate as a battle ground. The Habsburg right wing moving westward began to march through a densely forested area. Sari Süleyman Paşa decided that this was just the chance he was waiting for. He ordered an attack with his entire army on the imperial army's left wing, which under Maximilian II Emanuel, Elector of Bavaria was still in its earlier position, and which according to the Habsburg battle plan was also to start marching west. The Ottoman army caught the imperial army near Nagyharsány and the nearby Nagyharsány Hill, with its heavily wooded steep slopes. The Ottoman cavalry made up of 8000 Sipahis tried to outflank this Habsburg army wing from the left. The commander of the wing, the Elector of Bavaria, immediately sent a courier to the Commander Duke of Lorraine, informing him that this wing was under threat. Orders were given and sent quickly and positions were taken immediately to resist the attack of the superior Ottoman forces, which had twice the numbers of the defenders. The Imperial infantry held their position, and General Enea Silvio Piccolomini with some of his cavalry regiments successfully counterattacked and stopped the attack of the Ottoman Sipahi cavalry.[5]

The Ottoman Grand Vizier was surprised by this unexpectedly fierce enemy resistance and ordered the cessation of the Ottoman attack. The Ottoman artillery continued to shell the Habsburg positions, but the Ottoman infantry and cavalry troops were ordered to hold their positions and for the infantry to go defensive behind the fortifications. This relative lull in fierce fighting gave the right wing of the Habsburg Army enough time to return to its original position. The Habsburg commander the Duke of Lorraine initially thought that his army should defend the positions, which might have led to a relative standstill. However, to gain the initiative, the Elector of Bavaria and the Margrave Louis of Baden-Baden persuaded him to order a large-scale counter-attack. The deployment of the Imperial Habsburg Army for this counter-attack was finished at 3 pm. Just at the same time Sari Süleyman Paşa decided to attack again alongside Mustafa Pasha of Rodosto the commander of the Janissary. Again Sipahis supported the Janissary infantry frontal attack by attempting to outflank the Habsburg army. Margrave Ludwig of Baden successfully resisted the attack with his infantry squadrons and then he went on to attack the still unfinished Ottoman defensive position. At the forefront of this Imperial penetrative attack on the Ottoman fortifications were the troops under the command of the generals Rabutin and Eugene of Savoy. The Ottoman cavalry riders could not outflank because the steep terrain was difficult for their horses; they had to dismount. The Ottoman attack and then resistance collapsed and soon this led to a retreat of the Ottoman army in a wild flight.[5] The battle became a crushing defeat for the Ottomans.

The losses of the Habsburg Imperial army were very light, about 600 men.[6] The Ottomans army suffered huge losses with an estimated 10,000 deaths, as well as the loss of most of its artillery (about 66 guns) and much of its support equipment. The splendid command tent of the Grand Vizier and 160 Ottoman flags fell into Imperial hands. It is reported that the value of the share of the bounty that was given to the Elector of Bavaria surpassed two million golden ducats.[6]

After the battle, the Ottoman Empire fell into deep crisis. There was a mutiny among the Ottoman troops. The commander Sari Suleyman Pasa became frightened that he would be killed by his own troops and fled from his command, first to Belgrade and then to Istanbul. When the news of the defeat and the mutiny arrived in Istanbul in early September, Abaza Sivayus Pasa was appointed as the commander and soon as the Grand Vizier. However, before he could take over his command, the whole Ottoman Army had disintegrated and the Ottoman household troops (Janissaries and Sipahis) started to return to their base in Istanbul under their own lower-rank officers. Even the Grand Vizier's regent in Constantinople was frightened and hid. Sari Suleyman Pasa was executed. Sultan Mehmed IV appointed the commander of Istanbul Straits Köprülü Fazıl Mustafa Pasha as the Grand Vizier's regent in Istanbul. He made consultations with the leaders of the army that existed and the other leading Ottoman statesmen. After these, on 8 November 1687 it was decided to depose Sultan Mehmed IV and to enthrone Suleiman II as the new Sultan.[7]

The disintegration of the Ottoman army allowed Imperial Habsburg armies to conquer large areas. They took over Osijek, Petrovaradin, Sremski Karlovci, Ilok, Valpovo, Požega, Palota and Eger. Most of present-day Slavonia and Transylvania came under Imperial rule. On 9 December 1687 there was organised a Diet of Pressburg (today Bratislava, Slovakia), and Archduke Joseph was crowned as the first hereditary king of Hungary, and descendant Habsburg Emperors were declared the anointed kings of Hungary. For a year the Ottoman Empire was paralysed, and Imperial Habsburg forces were poised to capture Belgrade and penetrate deep into the Balkans.

Retrieved from "https://military.wikia.org/wiki/Battle_of_Mohács_(1687)?oldid=4387869"
Community content is available under CC-BY-SA unless otherwise noted.