Military Wiki
Register
Don't have an account?
Sign In
Advertisement
in: Articles incorporating text from Wikipedia, Conflicts in 1878, Battles of the Russo-Turkish War (1877–1878),
and 4 more

Edit
For other uses, see Battle of Plovdiv (disambiguation).

Following the crushing Russian victory at the last battle of Shipka Pass, Russian commander Gen. Joseph Vladimirovich Gourko began to move southeast towards Constantinople. Blocking the route was the Ottoman fortress at Plovdiv under Suleiman Pasha. On 16 January 1878, a squadron of Russian dragoons led by Captain Alexander Burago stormed the city. Its defenses were strong but superior Russian numbers overwhelmed them and the Ottoman forces retreated almost to Constantinople. At this time foreign powers intervened and Russia agreed to the Treaty of San Stefano. 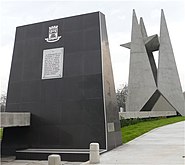 The Monument to the Liberation of Plovdiv