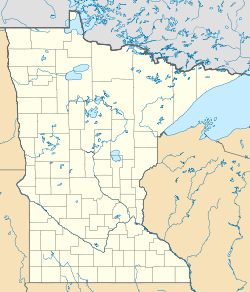 The station became operational on 1 October 1958 when the 692d Aircraft Control and Warning Squadron[1] began operating an AN/FPS-3 and a pair of AN/FPS-6 height-finder radars, and initially the station functioned as a Ground-Control Intercept (GCI) and warning station. As a GCI station, the squadron's role was to guide interceptor aircraft toward unidentified intruders picked up on the unit's radar scopes.

During 1959 Baudette AFS joined the Semi Automatic Ground Environment (SAGE) system, feeding data to DC-10 at Duluth IAP, Minnesota. After joining, the squadron was redesignated as the 692d Radar Squadron (SAGE) on 15 December 1959.[1] The radar squadron provided information around the clock to the SAGE Direction Center where it was analyzed to determine range, direction altitude speed and whether or not aircraft were friendly or hostile.

Over the years, the equipment at the station was upgraded or modified to improve the efficiency and accuracy of the information gathered by the radars. The AN/FPS-90 height-finder radar was retired in late 1971.

The 692nd Radar Sq was inactivated[1] and replaced by the 692d Air Defense Group in March 1970.[2] The upgrade to group status was done because of Baudette AFS' status as a Backup Interceptor Control (BUIC) site. BUIC sites were alternate control sites in the event that SAGE Direction Centers became disabled and unable to control interceptor aircraft. The group was awarded the Air Force Outstanding Unit Award for exceptionally meritorious service for the period 1 June 1971 through 31 May 1973[3] The group was inactivated[2] and replaced by the 692nd Radar Squadron[1] as defenses against manned bombers were reduced. The group was disbanded in 1984.[4] The 692d Radar Squadron was inactivated on 1 July 1979[1] as part of the phase-down of Aerospace Defense Command.

Today, the former Baudette Air Force Station is a cold-weather automobile test facility used by Acura. Many USAF buildings remain and in use and the station is well maintained, along with the large AN/FPS-24 search radar tower.

Retrieved from "https://military.wikia.org/wiki/Baudette_Air_Force_Station?oldid=4510057"
Community content is available under CC-BY-SA unless otherwise noted.