The Bell 430 is a twin-engine light-medium helicopter built by Bell Helicopter. It is a stretched and more powerful development of the Bell 230, which, in turn, was based on the earlier Bell 222.

While developing the reengined Model 222 as the 230, Bell began preliminary design work on a stretched derivative with a four-bladed main rotor in 1991. The Bell 430 was formally launched in February 1992, with two prototypes modified from Bell 230s. The first of these flew in its new configuration on October 25, 1994, and the second prototype, featuring the full 430 avionics suite, first flew on December 19, 1994.[1]

Production of the Bell 230 ended in August 1995, and 430 production began. The first 430 production aircraft was completed later that year. Canadian certification was awarded on February 23, 1996. Deliveries began in mid-1996.[1]

On January 24, 2008, Bell announced plans to terminate production of its Model 430 after current order commitments are fulfilled in 2010.[2] Production ended after 136 helicopters were completed,[3] with the last being delivered in May 2008.[4]

The Bell 430 features several significant improvements over the 230, the most significant of these being the new four-blade, bearingless, hingeless, composite main rotor. Although both the 230 and 430 are powered by Rolls-Royce (Allison) 250 turboshaft engines, the 430's engines are 10% more powerful. Other changes include the 1 ft 6 in (46 cm) stretched fuselage, providing for two extra seats, an optional EFIS flight deck, and a choice of either skids or retractable wheeled undercarriage.[1]

The typical configuration seats ten, including a pilot and co-pilot with eight passengers in the main cabin behind them in three rows of seats. Six- and eight-place executive layouts are offered. In an EMS role it can carry one or two stretcher patients with four or three medical attendants, respectively. Maximum external load capacity is 3,500 lb (1,585 kg).[1]

On September 3, 1996, Americans Ron Bower and John Williams broke the round-the-world helicopter record with the second Bell 430, flying westwards from the UK with a time of 17 days, 6 hours and 14 minutes.[1][4] 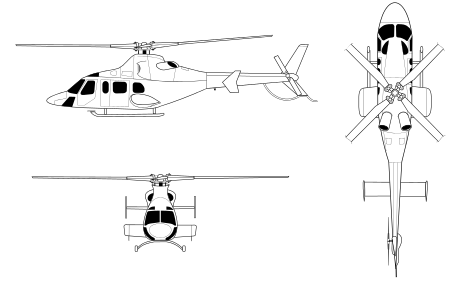 The president of Madagascar has eight Bell 430s. On October 13, 2005 two of these helicopters flew during a visit of the President to Imerin'Imady, a city far from the capital. One crashed during the landing with the president Marc Ravalomanana inside. The other helicopter that had already landed raised a dense cloud of dust, which misled the presidential pilot who then hit the first chopper and elevated the helicopter a dozen meters before being dropped violently against the ground on the left flank. In the cabin there was the presidential couple, a counselor, a minister, two bodyguards and the pilot but nobody was injured. The occupants were promptly evacuated by bodyguards. Both helicopters had been seriously damaged, but the first was still able to fly. The other Bell 430s were called to take over.[18][19]

A Bell 430 belonging to Ran Air crashed on August 3, 2008 in Andhra Pradesh near Venkatpuram, India. The helicopter collided with a hill under bad weather conditions.[20]

On September 2, 2009, an Andhra Govt. Bell 430 carrying Chief Minister Y. S. Rajasekhara Reddy and his party from Andhra Pradesh in southern India, went missing over a local stretch of forest. The charred wreckage was found the next morning, crashed on a hilltop in the Nallamala Hills.[21]

Retrieved from "https://military.wikia.org/wiki/Bell_430?oldid=4793199"
Community content is available under CC-BY-SA unless otherwise noted.