An inspector assesses an anchorage test in the forecastle aboard the aircraft carrier USS Carl Vinson (CVN 70). 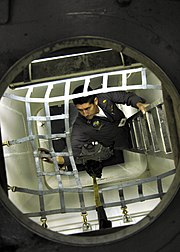 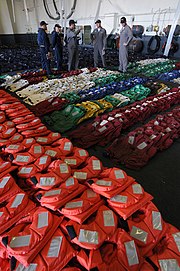 The Board of Inspection and Survey (INSURV) is a United States Navy organization whose purpose is to inspect and assess material condition of U.S. Navy vessels.

The Board is currently headquartered at Naval Amphibious Base Little Creek, Virginia.

The Board performs its tasks by sending out teams at intervals not to exceed 60 months per Naval Ship. These teams evaluate a ship's readiness to conduct combat operations at sea, through an extensive system of checks on installed equipment.

When a ship has been constructed by a shipyard and turned over to the U.S. Navy, an INSURV team must certify the vessel prior to declaring it operational.

The Board of Inspection and Survey was established by Congress to ensure that the ships of the United States Navy are properly equipped for prompt, reliable, sustained mission readiness at sea. Originally established in 1868 under Admiral David Farragut, the board was reconstituted in 1877 with Admiral David Porter as head of the board, expanding on the tasks he had assumed as duties under an instruction of November 16, 1870.

In 2008, six Navy ships, including Stout and Chosin, failed their INSURV inspections. More than two dozen other ships were found to have critical deficiencies. Parting from a past practice of publicly releasing INSURV inspection results, the Navy immediately classified the 2008 reports. In response, US Senator Jim Webb, in April 2009, asked the Senate Armed Services Committee to look into the Navy's decision. Said Representative Rob Wittman in support of Webb's action, "I am deeply concerned that a decision to classify these reports across the board would inhibit the Congress' ability to provide necessary and constitutionally mandated oversight."[1]

The Secretary of the Navy and the Chief of Naval Operations (CNO) have designated the President, Board of Inspection and Survey (PRESINSURV) as their agent to perform the following statutory, regulatory and contractual requirements:

Retrieved from "https://military.wikia.org/wiki/Board_of_Inspection_and_Survey?oldid=2501181"
Community content is available under CC-BY-SA unless otherwise noted.