The Boeing X-20 Dyna-Soar ("Dynamic Soarer") was a United States Air Force (USAF) program to develop a spaceplane that could be used for a variety of military missions, including reconnaissance, bombing, space rescue, satellite maintenance, and sabotage of enemy satellites. The program ran from 24 October 1957 to 10 December 1963, cost US$660 million ($5.08 billion today[1]), and was cancelled just after spacecraft construction had begun.

Other spacecraft under development at the time, such as Mercury or Vostok, were based on space capsules that returned on ballistic re-entry profiles. Dyna-Soar was more like the much later Space Shuttle. It could not only travel to distant targets at the speed of an intercontinental ballistic missile, it was designed to glide to earth like an aircraft under control of a pilot. It could land at an airfield, rather than simply falling to earth and landing with a parachute. Dyna-Soar could also reach earth orbit, like Mercury or Gemini.[2]

These characteristics made Dyna-Soar a far more advanced concept than other human spaceflight missions of the period. Research into a spaceplane was realized much later, in other reusable spacecraft such as the Space Shuttle,[3] which had its first orbital flight in 1981, and, more recently, the Boeing X-40 and X-37B spacecraft.

The development of Dyna Soar can be traced back to Eugen Sänger's Silbervogel, a German bomber project of World War II.[4] The concept was a rocket-powered bomber that could travel vast distances by gliding to its target after being boosted to high speed (>5.5 km/s) and high altitude (50–150 km) by A-4 or A-9 rocket engines.[4]

Such boost-glide systems could potentially strike at targets anywhere in the world (so called "antipodal bombers") at hypersonic speeds, be very difficult to intercept, and the aircraft itself could be small and lightly armed, compared to a typical heavy bomber. In addition, a boost-glide aircraft may be recoverable, acting as a manned bomber, or as an unmanned non-recoverable missile.

Following World War II, many German scientists were taken to the United States by the Office of Strategic Services's "Operation Paperclip". Among them was Dr. Walter Dornberger, the former head of Germany's wartime rocket program, who had detailed knowledge of the Silbervogel project.[5] Working for Bell, he attempted to create interest in a boost-glide system in the USAF, and elsewhere. This resulted in the USAF requesting a number of feasibility and design studies — carried out by Bell, Boeing, Convair, Douglas, Martin, North American, Republic, and Lockheed — for boost-glide vehicles during the early 1950s:

On 24 October 1957, the USAF Air Research and Development Command issued a proposal for a "Hypersonic Glide Rocket Weapon System" (Weapons System 464L): Dyna Soar. The proposal drew together the existing boost-glide proposals, as the USAF believed a single vehicle could be designed to carry out all the bombing and reconnaissance tasks intended for the separate studies, and act as successor to the X-15 research program. The Dyna-Soar program was to be conducted in three stages: a research vehicle (Dyna-Soar I), a reconnaissance vehicle (Dyna-Soar II, previously Brass Bell), and a vehicle that added strategic bombing capability (Dyna-Soar III, previously Robo). The first glide tests for Dyna-Soar I were expected to be carried out in 1963, followed by powered flights, reaching Mach 18, the following year. A robotic glide missile was to be deployed in 1968, with the fully operational weapons system (Dyna-Soar III) expected by 1974.

In March 1958, nine U.S. aerospace companies tendered for the Dyna-Soar contract. Of these, the field narrowed to proposals from Bell and Boeing. Even though Bell had the advantage of six years' worth of design studies, the contract for the spaceplane was awarded to Boeing in June 1959 (by which time their original design had changed markedly and now closely resembled what Bell had submitted). In late 1961, the Titan III was chosen as the launch vehicle. The Dyna-Soar was to be launched from Cape Canaveral Air Force Station, Florida.

The overall design of the X-20 Dyna-Soar was outlined in March 1960. It had a low-wing delta shape, with winglets for control rather than a more conventional tail. The framework of the craft was to be made from the René 41 super alloy, as were the upper surface panels. The bottom surface was to be made from molybdenum sheets placed over insulated René 41, while the nose-cone was to be made from graphite with zirconia rods.

Due to the changing requirements, various forms of the Dyna-Soar were designed. All variants shared the same basic shape and layout. A single pilot sat at the front, with an equipment bay situated behind. This bay contained data-collection equipment, weapons, reconnaissance equipment, or (in the X-20X "shuttle space vehicle") a four-man mid-deck.

A transition-stage rocket engine, located behind the equipment bay, would maneuver the craft in orbit or fire during launch as part of an abort sequence. This trans-stage would be jettisoned before descent into the atmosphere. While falling through the atmosphere an opaque heat shield would protect the window at the front of the craft. This heat shield would then be jettisoned after aerobraking so the pilot could see, and safely land.

A drawing in Space/Aeronautics magazine from before the project's cancellation depicts the craft dipping down into the atmosphere, skimming the surface, to change its orbital inclination. It would then fire its rocket to resume orbit. This would be a unique ability for a spacecraft, for the laws of celestial mechanics mean it requires an enormous expenditure of energy for a rocket to change its orbital inclination once it has reached orbit. Hence the Dyna-Soar could have had a military capacity of being launched into one orbit and rendezvousing with a satellite, even if the target were to expend all its propellant in changing its orbit. Acceleration forces on the pilot would be severe in such a maneuver.

Unlike the later Space Shuttle, Dyna-Soar did not have wheels on its tricycle undercarriage as it was thought the rubber would burn during re-entry. Instead Goodyear developed retractable wire-brush skids made of the same René 41 alloy as the airframe.

In April 1960, seven astronauts were secretly chosen for the Dyna-Soar program:

Neil Armstrong and Bill Dana left the program in mid-1962.

On 19 September 1962, Albert Crews was added to the Dyna-Soar program and the names of the six remaining Dyna-Soar astronauts were announced to the public.

By the end of 1962, Dyna-Soar had been designated "X-20", the booster (to be used in the Dyna Soar I drop-tests) successfully fired, and the USAF had held an "unveiling" ceremony for the X-20 in Las Vegas.[citation needed]

Besides the funding issues that often accompany research efforts, the Dyna-Soar program suffered from two major problems: uncertainty over the booster to be used to send the craft into orbit, and a lack of a clear goal for the project.

Many different boosters were proposed to launch Dyna-Soar into orbit. The original USAF proposal suggested LOX/JP-4, fluorine-ammonia, fluorine-hydrazine, or RMI (X-15) engines. Boeing, the principal contractor, favored an Atlas-Centaur combination. Eventually the Air Force stipulated a Titan, as suggested by failed competitor Martin, but the Titan I was not powerful enough to launch the five-ton X-20 into orbit.

The Titan II and Titan III boosters could launch Dyna-Soar into Earth orbit, as could the Saturn C-1 (later renamed the Saturn I), and all were proposed with various upper-stage and booster combinations. While the Titan IIIC was eventually chosen to send Dyna-Soar into space, the vacillations over the launch system delayed the project as it complicated planning.

The original intention for Dyna-Soar, outlined in the Weapons System 464L proposal, called for a project combining aeronautical research with weapons system development. Many questioned whether the USAF should have a manned space program, when that was the primary domain of NASA. It was frequently emphasized by the U.S. Air Force that, unlike the NASA programs, Dyna-Soar allowed for controlled re-entry, and this was where the main effort in the X-20 program was placed. On 19 January 1963, the Secretary of Defense, Robert McNamara, directed the U.S. Air Force to undertake a study to determine whether Gemini or Dyna-Soar was the more feasible approach to a space-based weapon system. In the middle of March 1963, after receiving the study, Secretary McNamara "stated that the Air Force had been placing too much emphasis on controlled re-entry when it did not have any real objectives for orbital flight".[8] This was seen as a reversal of the Secretary's earlier position on the Dyna-Soar program. Dyna-Soar was also an expensive program that would not launch a manned mission until the mid-1960s at the earliest. This high cost and questionable utility made it difficult for the U.S. Air Force to justify the program. Eventually, the X-20 Dyna-Soar program was canceled on 10 December 1963.[3]

On the day that X-20 was canceled, the U.S. Air Force announced another program, the Manned Orbiting Laboratory, a spin-off of Gemini. This program was also eventually canceled. Another black program ISINGLASS, which was to be airlaunched from a B-52 bomber, was evaluated and some engine work done. This eventually was cancelled also.[9]

Despite cancellation of the X-20, the affiliated research on spaceplanes influenced the much larger Space Shuttle that would also be boosted into orbit by large rockets. The final design also used delta wings for controlled landings. However, it did not fly until decades after the X-20 program was canceled. The later, and much smaller Soviet BOR-4 was closer in design philosophy to the Dyna-Soar,[10] while NASA's Martin X-23 PRIME and Martin Marietta X-24A/HL-10 research aircraft also explored aspects of sub-orbital and space flight.[11] 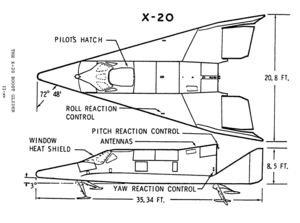 Retrieved from "https://military.wikia.org/wiki/Boeing_X-20_Dyna-Soar?oldid=4510520"
Community content is available under CC-BY-SA unless otherwise noted.