The Grenztruppen were the primary force guarding the Berlin Wall and the Inner German border, the GDR's international borders between West Berlin and West Germany respectively. The force belonged to the Ministry of National Defence (MfNV) from 1961, and was a service branch of the National People's Army until 1971 when it became directly subordinate to the MfNV. The Border Troops numbered approximately 47,000 personnel at its peak, consisting of volunteers and conscripts, the third-largest Warsaw Pact border guard after Soviet Union and Poland.

The Grenztruppen's main role was preventing Republikflucht, the illegal migration from the GDR, and were controversially responsible for many deaths at the Berlin Wall. At least 29 border guards were killed in the line of duty, and many faced criminal charges after German Reunification.

By December 1945, within six months of the end of the Second World War, each of the five States in the Soviet Zone of Occupation had new police forces in clear violation of the Yalta and Potsdam agreements[citation needed]. In early January 1946, the name Volkspolizei (People's Police) was publicly applied to the new police forces in the Soviet Zone, and in August these forces were placed under the centralized control of the newly created German Administration of the Interior, headed by Erich Reschke. On 1 December 1946, the Deutsche Grenzpolizei (German Border Police) was organized by the Soviet Military Administration in Germany (Sowjetische Militäradministration in Deutschland, SMAD) as a paramilitary to defend the borders of the Soviet Zone. The initial 3,000 recruits of the Grenzpolizei were organized and trained from Volkspolizei resources, and by April 1948 numbered 10,000 personnel before rising to 18,000 in 1950. The Grenzpolizei were armed and organised like a police force, and were subordinate to the Main Administration of the Border Police and Alert Units of the German Administration of the Interior. The Soviet Zone was formed into the German Democratic Republic (GDR or East Germany) in October 1949 and led by the Socialist Unity Party of Germany (SED) under Soviet influence. The SED reorganized the Grenzpolizei along military lines, similar to the USSR Border Troops, and briefly transferred them from the Ministry of the Interior (Ministerium des Innern) to the Ministry of State Security (MfS or Stasi) from May 1952 to June 1953. In 1961, the Grenzpolizei were reorganized as the Border Troops of the GDR (Grenztruppen der DDR) and were moved from the Ministry of the Interior, which oversaw policing, to the Ministry of National Defense (MfNV) which oversaw the military. The Grenztruppen became the fourth service branch of the National People's Army (NVA), the armed forces of the GDR, until 1973 when they were separated and became directly subordinate to the MfNV. While wearing standard NVA uniforms, the Grenztruppen had their own dark green arm-of-service colour, and their service and dress uniforms bore a green cuff title with white lettering "Grenztruppen der DDR" on the left arm. From 1973, service in the Grenztruppen became entirely voluntary, ending the use of involuntarily conscripts – only professional soldiers and voluntary conscripts could serve in its ranks. The vast majority of Grenztruppen efforts were directed along the GDR's western borders with West Germany and West Berlin, with only about 600 members assigned to guard the GDR's borders with Poland and Czechoslovakia. This continued until the 1980s when the rise of the Solidarity trade union in Poland saw the GDR considerably toughen the Grenztruppen's presence along their border.

On 1 July 1990, the GDR's border control regime along the borders with West Germany and West Berlin was ended. In September 1990, shortly before the reunification of Germany, the Grenztruppen der DDR were disbanded; its border patrol duties along united Germany's eastern frontiers were assumed by the Bundesgrenzschutz (Federal Border Guard - later Bundespolizei or Federal Police).

For most visitors to East Berlin and the GDR, including persons who utilized the land transit routes (road and rail) between West Germany and West Berlin, their exposure to the Grenztruppen der DDR consisted of dealing with the members of the Pass and Control Units (Paß- und Kontrolleinheiten, PKE) who processed travellers passing through the GDR's Grenzübergangsstellen (border crossing points). Although they wore Grenztruppen uniforms, the members of the PKE were in fact members of the 6th Main Department (Hauptabteilung VI) of the Stasi.

The units of the Grenztruppen der DDR were organised in the same manner as ordinary NVA army units. The structure listed immediately below was that which existed prior to 30 November 1989.

The headquarters of the Grenztruppen der DDR was located at Pätz (a small village southeast of Berlin in the present-day state of Brandenburg), near Königs Wusterhausen.

The Grenzkommando Nord (GKN) (Border Command North), with headquarters at Stendal (in the present-day state of Saxony-Anhalt) was responsible for the northern sector of the East German border. The GKN consisted of six frontier troops regiments, two training regiments, a helicopter flight and some smaller support units.

The Grenzkommando Süd (GKS) (Border Command South), with headquarters at Erfurt, guarded the southern border sector. The organizational structure of the GKS was similar to that of the GKN, with six frontier troops regiments, two training regiments, a helicopter flight and some smaller support units.

The Grenzkommando Küste (GKK) (Coastal Border Command), with headquarters at Rostock, deployed a coastal brigade (Grenzbrigade Küste) consisting of twelve marine battalions and several boat battalions and companies to guard the GDR's relatively small coastline along the Baltic Sea. For command-and-control purposes, the GKK was incorporated into the GDR's People's Navy (Volksmarine).

In accordance with a June 1989 decision of the National Defense Council of the GDR, the Grenztruppen der DDR were extensively reorganized as of 30 November 1989. The personnel strength was reduced by approximately 17 percent, while the number of headquarters units was reduced from 50 to 24.

The two training centers reported directly to the national headquarters, along with the training schools for Grenztruppen officers, officer candidates and NCOs.

Sep 1961 -1973:Controlled by the NVA, the Grenzpolizei were reorganized as the Kommando der Grenztruppen (KdoGT) der NVA and were moved from the GDR MdI to the GDR Ministry of National Defense (MfNV)

1973 - 1990:Controlled directly by the MfNV. Renamed the Grenztruppen der DDR

1990 - 1994:Controlled by Bundeswehr. The border guards' numbers were rapidly reduced. Half were dismissed within five months of the opening of the border.[2] The border was abandoned and the Grenztruppen were officially abolished on 1 July 1990,;[3] all but 2,000 of them were dismissed or transferred to other jobs. The Bundeswehr gave the remaining border guards and other ex-NVA soldiers the task of clearing the border fortifications, which was only completed in 1994. The scale of the task was immense, as not only did the fortifications have to be cleared but hundreds of roads and railway lines had to be rebuilt.[4]

Training for Grenztruppen der DDR soldiers was provided by the four training regiments; after the reorganization of 30 November 1989 (see below), the four regiments were consolidated into two training centers. Training for noncommissioned officers was held at the Unteroffiziersschule der Grenztruppen der DDR "Egon Schultz“ in Perleberg. Training for dog handlers was conducted in Wilhelmshorst. Grenztruppen officers and officer candidates were trained at the Offiziershochschule der Grenztruppen der DDR "Rosa Luxemburg“ in Suhl (previously located in Plauen). Border Troop regiments were trained similar to regular infantry, but were much more lightly equipped than comparable NVA infantry formations, with the heaviest weapon being the RPG-7 grenade launcher. To increase their capability to search for persons attempting to flee the GDR, most units had German Shepherd dogs. A regiment consisted of around 1,500 men divided into three battalions of four companies each. These regiments also had an anti-tank battery, a mortar battery and an engineer company.

Units of the Grenzkommando Mitte were mechanized, with PSzH-IV and FUG armoured vehicles. 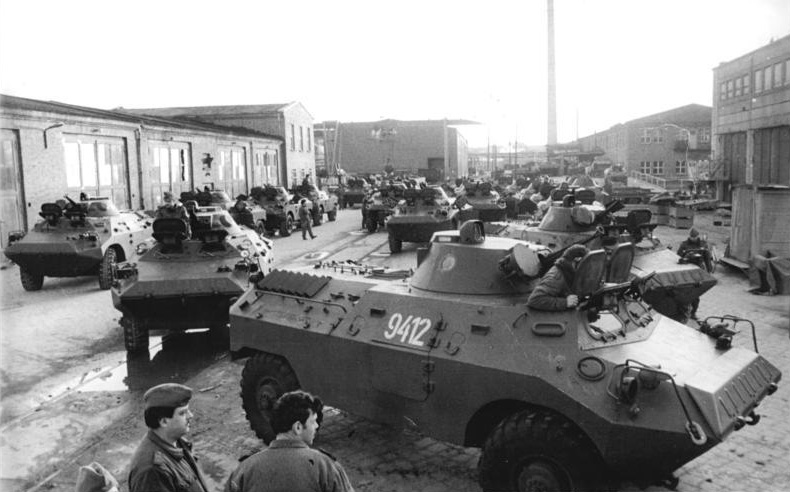 River patrol boat.
Add a photo to this gallery

Undoubtedly the most controversial aspect surrounding the Grenztruppen der DDR concerns those who were killed or wounded while attempting to flee East Germany into the West. Even today, the topic of the "shoot-to-kill order" (Schießbefehl) is quite sensitive in Germany, East and West. According to information released by the "Working Group 13th of August" (Arbeitsgemeinschaft 13. August e.V.) on 13 August 2004, 1065 persons were killed along the GDR's frontiers and coastline, including 37 Grenztruppen soldiers killed during escape attempts. Many more were wounded.

The Berlin Public Prosecution Department estimates that about 270 'proven' deaths on the border were due to acts of violence by GDR border security guards, including deaths caused by mines and automatic firing devices. However, the Central Assessment Group for Governmental and Organized Crimes (German: ZERV), which existed from 1991 to 2000 as a branch of the Berlin Police, registered 421 suspected cases of killings by armed GDR border guards.[5]

To encourage the troops, the GDR government gave distinctions, extra liberty and premiums to a soldier who had used his gun in earnest at the border. If he had killed a refugee, he would receive a gold watch, but was also transferred to another unit to avoid bullying from his own unit buddies.[6][not in citation given]

29 Grenztruppen died in the line of duty. The first three deaths occurred at the time of the Soviet occupation zone, after the founding of the German Democratic Republic in October 1949 until its end of 1990 were a further 26 border policemen and border soldiers were killed. Of these 29, 20 died on the inner-German border, eight in Berlin at the Wall and one on the border with Czechoslovakia. Concrete information on the individual perpetrators and their motives is not possible in all cases. Known perpetrators were persons attempting to flee to the West (either civilian or military), citizens of West Germany assisting such escapes, or members of either West German police/border guard units or NATO armed forces.[citation needed]

The list of names of the deceased are below. Only occasional light on the cause of death and killers if known is shed.

Retrieved from "https://military.wikia.org/wiki/Border_Troops_of_the_German_Democratic_Republic?oldid=4667334"
Community content is available under CC-BY-SA unless otherwise noted.