The Brandenburg Gate (German language: Brandenburger Tor) is a former city gate, rebuilt in the late 18th century as a neoclassical triumphal arch, and now one of the most well-known landmarks of Germany.

It is located in the western part of the city centre of Berlin, at the junction of Unter den Linden and Ebertstraße, immediately west of the Pariser Platz. One block to the north stands the Reichstag building. The gate is the monumental entry to Unter den Linden, the renowned boulevard of linden trees, which formerly led directly to the city palace of the Prussian monarchs.

It was commissioned by King Frederick William II of Prussia as a sign of peace and built by Carl Gotthard Langhans from 1788 to 1791. Having suffered considerable damage in World War II, the Brandenburg Gate was fully restored from 2000 to 2002 by the Stiftung Denkmalschutz Berlin (Berlin Monument Conservation Foundation).[1]

During the post-war Partition of Germany, the gate was isolated and inaccessible immediately next to the Berlin Wall, and the area around the gate featured most prominently in the media coverage of the opening of the wall in 1989.

Throughout its existence, the Brandenburg Gate was often a site for major historical events and is today considered a symbol of the tumultuous history of Europe and Germany, but also of European unity and peace.

In the time of Frederick William (1688), shortly after the Thirty Years' war and a century before the gate was constructed, Berlin was a small walled city within a star fort with several named gates: Spandauer Tor, St. Georgen Tor, Stralower Tor, Cöpenicker Tor, Neues Tor, and Leipziger Tor (see map). Relative peace, a policy of religious tolerance, and status as capital of the Kingdom of Prussia facilitated the growth of the city.

The Brandenburg Gate was not part of the old fortifications but one of 18 gates within the Berlin Customs Wall (German language: Akzisemauer), erected in the 1730s, including the old fortified city and many of its then suburbs.

The new gate was commissioned by Friedrich Wilhelm II to represent peace. The Gate was designed by Carl Gotthard Langhans, the Court Superintendent of Buildings, and built between 1788 and 1791, replacing the earlier simple guard houses siding the original gate in the Customs Wall. The Gate consists of twelve Doric columns, six to each side, forming five passageways. Citizens originally were allowed to use only the outermost two on each side. Atop the gate is the Quadriga, a chariot drawn by four horses driven by Victoria, the Roman goddess of victory. However, the new gate was originally named the Peace Gate (German: Friedenstor)[2] and the goddess could then also be interpreted as Eirene, the goddess of peace.

The Gate's design is based upon the Propylaea, the gateway to the Acropolis in Athens, Greece and is consistent with Berlin's history of architectural classicism (first, Baroque, and then neo-Palladian). The Gate was the first "Athens on the River Spree" by architect Carl Gotthard von Langhans. The capital Quadriga was sculpted by Johann Gottfried Schadow.

The Brandenburg Gate has played different political roles in German history. After the 1806 Prussian defeat at the Battle of Jena-Auerstedt, Napoleon was the first to use the Brandenburg Gate for a triumphal procession[3] and took its Quadriga to Paris.[4]

After Napoleon's defeat in 1814 and the Prussian occupation of Paris by General Ernst von Pfuel, the Quadriga was restored to Berlin. It was now redesigned by Karl Friedrich Schinkel for the new role of the Brandenburg Gate as a Prussian triumphal arch; the goddess, now definitely Victoria, was equipped with the Prussian eagle and Iron Cross on her lance with a wreath of oak leaves.[2]

The Quadriga faces east, as it did when it was originally installed in 1793. Only the royal family was allowed to pass through the central archway,[4] as well as members of the Pfuel family, from 1814 to 1919. In addition, the central archway was also used by the coaches of Ambassadors on the single occasion of their presenting their letters of credence to council.

When the Nazis ascended to power they used the Gate as a party symbol. The Gate survived World War II and was one of the damaged structures still standing in the Pariser Platz ruins in 1945 (another being the Academy of Fine Arts). The gate was badly damaged with holes in the columns from bullets and nearby explosions. Following Germany's surrender and the end of the war, the governments of East Berlin and West Berlin restored it in a joint effort. The holes were patched, and were visible for many years following the war.

During 1990, the Quadriga was removed from the gate as part of renovation work carried out by the East German authorities following the fall of the wall in November 1989. Germany was officially reunified in October 1990.

On 21 December 2000, the Brandenburg Gate was privately refurbished at a cost of six million Euros.

On 3 October 2002, the twelfth anniversary of German Reunification, the Brandenburg Gate was once again reopened following extensive refurbishment.

The Brandenburg Gate is now again closed for vehicle traffic, and much of Pariser Platz has been turned into a cobblestone pedestrian zone. The gate, along with the broad Straße des 17. Juni avenue to the west, is also one of the gathering points in Berlin where over a million people gather to watch a stage show, party and see fireworks go off at midnight on New Year's Eve.[5]

Vehicles and pedestrians could travel freely through the gate, located in East Berlin, until the Berlin Wall was built, 13 August 1961. Then one of all together eight Berlin Wall crossings was opened on the eastern side of the gate, usually not open for East Berliners and East Germans, who from then on needed a hard-to-obtain exit visa. On 14 August West Berliners gathered on the western side of the gate to demonstrate against the Berlin Wall, among them West Berlin's governing Mayor Willy Brandt, who had spontaneously returned from a federal election campaigning tour in West Germany earlier on the same day.

Under the pretext that Western demonstrations required it, the East closed the checkpoint at the Brandenburg Gate the same day, 'until further notice', a situation that was to last until 22 December 1989. The Wall was erected as an arc just west of the gate, cutting off access from West Berlin. On the eastern side, the "baby Wall", drawn across the eastern end of Pariser Platz rendered it off limits to East Berliners as well.

When the Revolutions of 1989 occurred and the Wall fell, the gate symbolized freedom and the desire to unify the city of Berlin. Thousands of people gathered at the Wall to celebrate its fall on 9 November 1989. On 22 December 1989, the Brandenburg Gate crossing was reopened when Helmut Kohl, the West German chancellor, walked through to be greeted by Hans Modrow, the East German prime minister. Demolition of the rest of the Wall around the area took place the following year.

Brandenburg Gate became the main venue for the 20th anniversary celebrations of the fall of the Berlin Wall or "Festival of Freedom" on the evening of 9 November 2009. The high point of the celebrations was when over 1000 colorfully designed foam domino tiles, each over 2.5 meters tall, were lined up along the route of the former wall through the city centre. The domino "wall" was then toppled in stages converging here.[6] 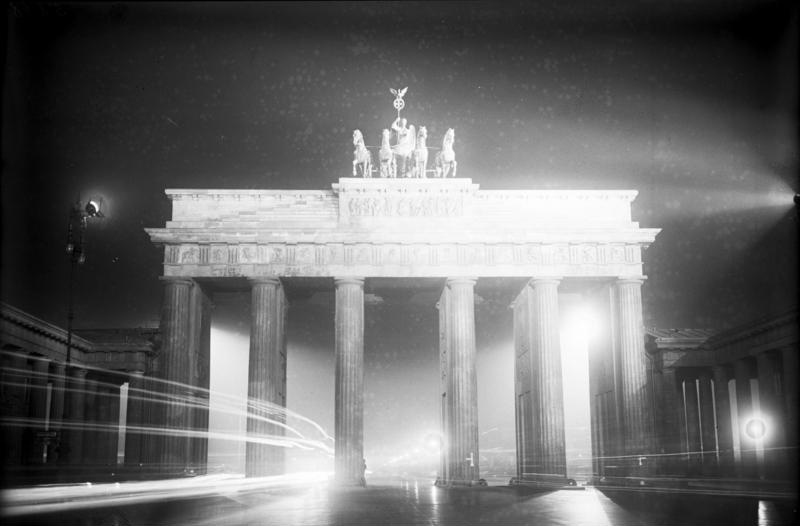 In 1984, East Berliners and others were kept away from the Gate, which they could view only from this distance.

The Berlin Wall in front of the Brandenburg Gate, shortly before its fall in 1989 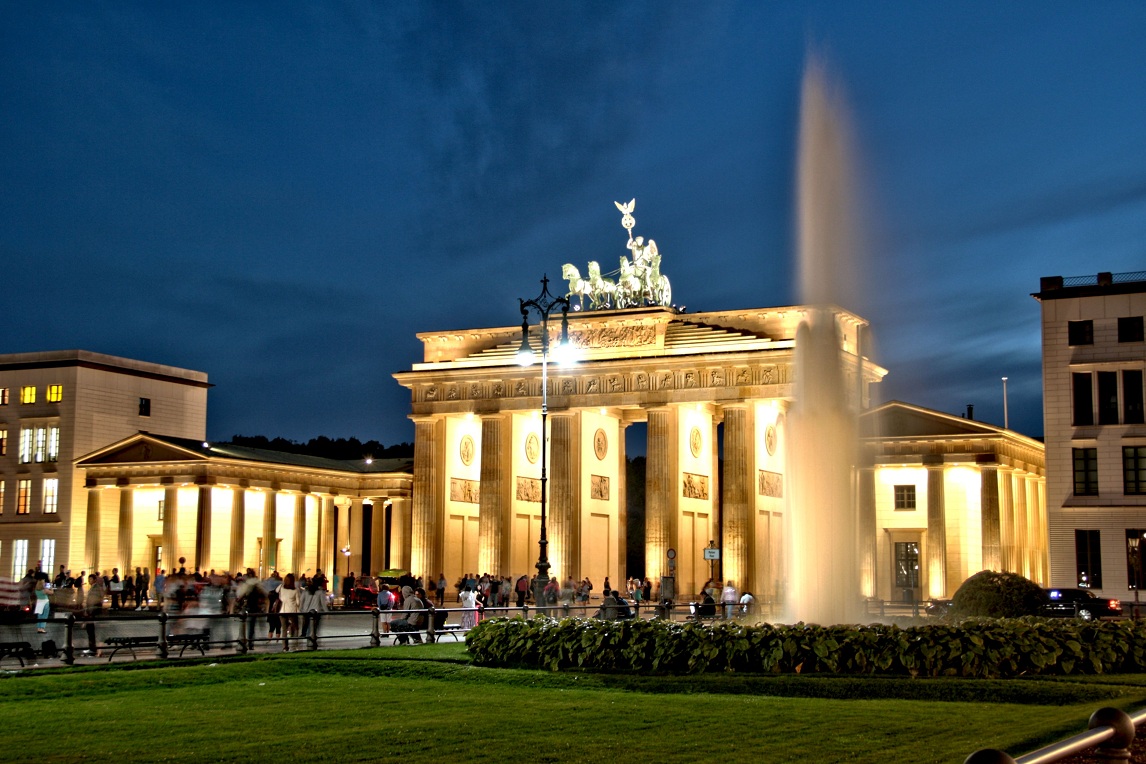 At night
Add a photo to this gallery

A Soviet flag flew from a flagpole atop the gate from 1945 until 1957, when it was replaced by an East German flag. Since the reunification of Germany, the flag and the pole have been removed.

In 1963, U.S. President John F. Kennedy visited the Brandenburg Gate. The Soviets hung large red banners across it to prevent him looking into East Berlin.

In the 1980s, decrying the existence of two German states and two Berlins, West Berlin mayor Richard von Weizsäcker said: "The German question is open as long as the Brandenburg Gate is closed."[7]

On 12 June 1987, U.S. President Ronald Reagan spoke to the West Berlin populace at the Brandenburg Gate, demanding the razing of the Berlin Wall.[8][9] Addressing the General Secretary of the Communist Party of the Soviet Union, Mikhail Gorbachev, Reagan said,

On 25 December 1989, less than two months after the Berlin Wall began to come down, the conductor Leonard Bernstein conducted the Berlin Philharmonic in a version of the Ninth Symphony of Beethoven at the then newly opened Brandenburg Gate. In the concluding choral movement of the symphony, the famous "Ode to Joy", the word Freude ("Joy") was replaced with Freiheit ("Freedom") to celebrate the fall of the Wall and the imminent reunification of Germany.

On 2–3 October 1990, the Gate was the scene of the official ceremony to mark the reunification of Germany. At the stroke of midnight on 3 October, the black-red-gold flag of West Germany—now the flag of a reunified Germany—was raised over the Gate.

On 12 July 1994, U.S. President Bill Clinton spoke at the Gate about peace in post–Cold War Europe.

On 9 November 2009, Chancellor Angela Merkel, walked through Brandenburg Gate with Russia's Mikhail Gorbachev and Poland's Lech Wałęsa as part of the 20-year celebration of tearing down the Berlin Wall.[11][12]

On 13 August 2011, Germany marked the 50th anniversary of the day the Berlin Wall started to go up with a memorial service and a minute of silence in memory of those who died trying to flee to the West. "It is our shared responsibility to keep the memory alive and to pass it on to the coming generations as a reminder to stand up for freedom and democracy to ensure that such injustice may never happen again," Berlin Mayor Klaus Wowereit said. German Chancellor Angela Merkel—who grew up behind the wall in Germany's communist eastern part—also attended the commemoration. German President Christian Wulff added, "It has been shown once again: Freedom is invincible at the end. No wall can permanently withstand the desire for freedom."[13][14][15]

Retrieved from "https://military.wikia.org/wiki/Brandenburg_Gate?oldid=5091377"
Community content is available under CC-BY-SA unless otherwise noted.