Brazilian Naval Aviation (Portuguese: Aviação Naval Brasileira; AvN) is the air arm of the Brazilian Navy operating from ships including the aircraft carrier São Paulo and from shore installations.

Naval aviation was organized in August 1916, after creation of a naval aviation school and an aviation flotilla. Brazilian naval aviators participated in patrol operations during the First World War, incorporating into the 10th Operations Group of the Royal Air Force.

The Brazilian Air Force was founded on January 20, 1941 extinguishing independent Army and Navy aviation at that time and forming a new armed service.

From mid-1942 until the end of the Second World War, the Brazilian Air Force patrolled the Atlantic. On 31 July 1943 it claimed the German submarine U-199, which was located on the surface, off Rio de Janeiro, two Brazilian aircraft, a PBY Catalina and a Lockheed Hudson, and an American PBM Mariner attacked the U-boat.[1] The Catalina, named Ärará, was captained by 2º Ten.-Av. (2nd Lt.) Alberto M. Torres,[2] and hit U-199 with depth charges, sinking her.

In 1956 the aircraft carrier Minas Gerais was acquired by the navy commissioning in 1960. In 1965 helicopters were permitted, after substantial political struggle, to the navy by a presidential decree and in 1998 authority to operate carrier based fixed wing aircraft for the Navy was granted by Presidential decree No. 2538. From 1961 to 1999 the Brazilian Air Force flew the S-2 Trackers of the Brazilian aircraft carrier Minas Gerais while the Navy flew the helicopters. In 1997, Minas Gerais was loaned an A-4Q airframe by the Argentine Aviación Naval (Naval Aviation) for deck-handling and interface trials.[3] This was in lead-up to the 1999 acquisition of 20 A-4KU Skyhawks and three TA-4KU trainer aircraft from the Kuwait Air Force for US$70 million.[4]

On September 30, 1999 Lieutenant Alvarenga of the Brazilian Navy was the last student naval aviator to make an arrested landing in the Skyhawk on a United States aircraft carrier. He is also the last US Navy naval aviation school Skyhawk student to earn his wings. On April 26, 2000, The first AF-1 (A-4KU) flight in Brazil. The aircraft N-1007 was manned by LtCol (USMC) James Edwin Rogers. A month later the same aircraft was being flown for the first time by a Brazilian Navy pilot who was also the first to do a touch-and-go on the Brazilian Navy carrier Minas Gerais. On 26 MAY 2000, Brazilian Navy VF-1, Falcoes AF1 Skyhawk N 1007 piloted by Lieutenant Alvarenga took off from São Pedro d'Aldeia Naval Air Base, Brazil. This was the first solo flight of a VF-1, Falcoes AF1 Skyhawk and the first fixed-wing flight by a Brazilian Naval Aviator since 1965. On January 2001, The first arrested landing and catapult launch from Minas Gerais of an A-4 were executed by CDR Daniel G. Canin, followed two days later by the first Brazilian Navy pilot to land on a Brazilian carrier.[5]

In June 2013, Brazilian naval aviation personnel provided carrier training support to the Chinese Navy during the second round of flight tests on board the carrier Liaoning.[6]

Since 2001, by Brazilian invitation, pilot qualification tests of the Argentine Navy's Dassault-Breguet Super Étendards and S-2T Turbo Trackers now take place on the Brazilian Navy carrier São Paulo as Argentina now lacks a carrier of their own. Brazil also trains with and conducts regular exercises with the US Navy.

As of 2012, the Brazilian Naval Aviation operates around 81 aircraft.[7]

An A-4 Skyhawk on board the Sāo Paulo. 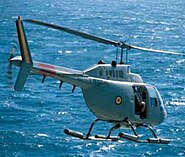 Sea King Brazilian Navy
Add a photo to this gallery

Retrieved from "https://military.wikia.org/wiki/Brazilian_Naval_Aviation?oldid=4667351"
Community content is available under CC-BY-SA unless otherwise noted.