For other uses, see Bulawa (disambiguation).

The bulawa (Latin [Polish] spelling: buława; Ukraine, булава [bulava]) is a ceremonial mace or baton. The word is of Ukrainian language - "the cone" origin.

Historically the buława was an attribute of a hetman, an officer of the highest military rank (a Field or Grand Hetman of Ukraine, or of the Polish-Lithuanian Commonwealth; and the Otaman of Ukraine) or the military head of a Cossack state.

In Ukrainian language, a buława or bulava is a mace or a club, in both the military and ceremonial senses. The bulava was part of the Ukrainian Cossack Kleinody that were awarded by Hetman Bohdan Khmelnytsky to the Zaporizhian Host.[1]

Hetmans typically added an image of a buława to their coats of arms.

Today the buława appears in the rank insignia of a Marshal of Poland.

The bulava is also an official symbol of the President of Ukraine, being housed in Ukraine's Vernadsky National Library. 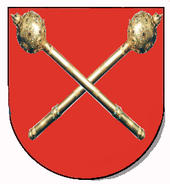 Coat-of-arms of a Polish hetman

Retrieved from "https://military.wikia.org/wiki/Bulawa?oldid=4047289"
Community content is available under CC-BY-SA unless otherwise noted.