The Bureau of Marine Inspection and Navigation was abolished as unnecessary and redundant by Reorganization Plan No. III of 1946, with all functions being absorbed by the U.S. Customs Service and the U.S. Coast Guard. 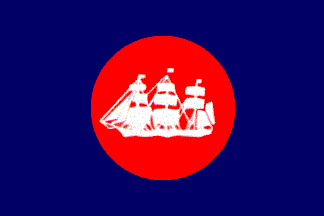 The flag of the Bureau of Navigation.

Flag of the Director of the Bureau of Marine Inspection and Navigation.
Add a photo to this gallery

Retrieved from "https://military.wikia.org/wiki/Bureau_of_Navigation?oldid=4155136"
Community content is available under CC-BY-SA unless otherwise noted.