The CBU-97 Sensor Fuzed Weapon is a United States Air Force 450-kilogram (1,000 lb)-class non-guided (freefall) Cluster Bomb Unit (CBU). It was developed and produced by Textron Defense Systems. The CBU-97 in conjunction with the Wind Corrected Munitions Dispenser guidance tail kit, which converts it to a precision-guided weapon, is designated CBU-105.[1]

The CBU-97 consists of an SUU-66/B tactical munition dispenser that contains 10 BLU-108 submunitions. Each submunition contains four hockey-puck-shaped sensor-fused projectiles called Skeets. These detect target vehicles, such as tanks, armored personnel carriers, trucks and other support vehicles, and fire a kinetic energy penetrator downwards at them. 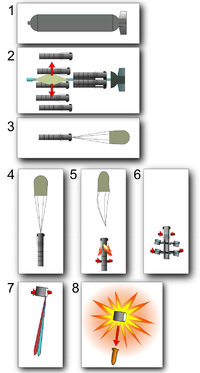 The 40 Skeets scan an area of 460 by 150 metres (1,500 ft × 500 ft) using infrared and laser sensors, seeking targets by pattern-matching. When a Skeet finds a target it fires an explosively-formed penetrator to destroy it. If a Skeet fails to find a target, it self-destructs 15 metres (50 ft) above the ground; if this fails, a back-up timer disables the Skeet. These features are intended to avoid later civilian casualties from unexploded munitions, and result in an unexploded-ordnance rate of less than 1%.

As the CBU-97 approaches its designated aim-point, the dispenser skin is severed into three panels by an explosive cutting charge. The slipstream peels away these panels, exposing the 10 BLU-108 submunitions. An airbag ejects the forward five submunitions, then five in the aft bay. Following a preset timeline, the submunitions deploy parachutes so that they are spaced about 30 metres (100 ft) apart. Then each submunition releases its chute, fires a rocket motor that stops its descent and spins it on its longitudinal axis, and releases Skeets 90 degrees apart, in pairs. Each spinning Skeet makes a coning motion that allows it to scan a circular area on the ground. The laser sensor detects changes in apparent terrain height such as the contour of a vehicle. At the same time, infrared sensors detect heat signatures, such as those emitted by the engine of a vehicle. When the combination of height contours and heat signatures indicative of a target are detected, the Skeet detonates, firing an explosively formed penetrator (EFP), a kinetic energy penetrator, down into the target at high speed, sufficient to penetrate armor plating and destroy what is protected by it. Even well-armored vehicles such as main battle tanks, while having massive armor protection on the front and sides, are only lightly armored above,[2] and relatively easily penetrated. SFW disables targets using the kinetic energy of the penetrator; it does not explode. Each bomb can spread penetrators over an area of 61,000 m2 (15 acres) or more. According to an ABC News consultant, an attack by this bomb would basically stop an armored convoy moving down a road. While the bomb was designed during the cold war for fighter-bombers flying at low altitude below radar cover to attack Soviet tanks, a single B-52 high altitude heavy bomber can destroy an entire armored division with these bombs, where in the past dozens of aircraft would have had to drop hundreds of bombs for the same effect.[3]

The weapon was first deployed, but not used, during Operation Allied Force when NATO entered the Kosovo War. Sensor-fused weapons were first fired in combat during the 2003 invasion of Iraq.

In 2010 the US government announced the sale to India of 512 CBU-105 Sensor Fuzed Weapons.[2] The expected platform is the SEPECAT Jaguar.[5]

In addition to the United States, the CBU-105 has been ordered by India, Oman, Saudi Arabia, South Korea, Turkey, and the United Arab Emirates.[7]

Retrieved from "https://military.wikia.org/wiki/CBU-97_Sensor_Fuzed_Weapon?oldid=4409451"
Community content is available under CC-BY-SA unless otherwise noted.