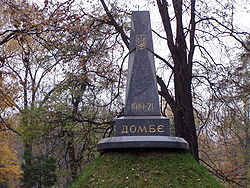 Monument to the deceased soldiers of the UNR at the Rakowicki Cemetery.

Combatants of the Ukrainian People's Republic (UNR) Army were interned in Poland initially at the end of 1919 (after the breakdown of Ukrainian front) in Łańcut immediately after they organized six Rifle divisions. After the defeat of the UNR Army at the end of 1920 and its crossing over to Polish territory, about 20,000 soldiers were placed in a number of Internment camps, the most important were in Łańcut, Aleksandrów Kujawski and Kalisz (Wadowice and Piotrków). In mid 1921, the internees were transferred from Łańcut to Strzałkowo and at the end of 1921 from Aleksandrów to Szczypiorno, as well as to neighbouring Kalisz. The internment camps remained until their final liquidation in the middle of 1924.

The conditions of life in the camps of internees in Poland (in particular domestic and material) were difficult (considerably worse than in the internment camps for soldiers of Ukrainian Galician Army in Czechoslovakia).[citation needed] Despite this active cultural and educational life developed within the camps - courses for the illiterate and other (especially professional), various schools (there was a high school in Kalisz), folk university at Łańcut and Strzałkowo; galleries, theatrical groups and other educational and cultural organizations - publications exposed artistic and also religious life (in particular in the press).

The leader of camps of internees (it was in the Ukrainian hands and related to the UNR government in exile) cared about the theoretical military teaching and increased the petty officer personnel. The camps of internees in Kalisz and Szczypiorno were after Warsaw the second cell of life of Ukrainian emigration in Poland. The number of soldiers in internment camps diminished constantly: with departure to Czechoslovakia, in particular for university, to France for labour and similar. After liquidation of internment camps, the former soldiers passed to a status of political emigrants in Poland.

Retrieved from "https://military.wikia.org/wiki/Camps_for_soldiers_of_the_UNR_Army_interned_in_Poland_(1919–1924)?oldid=5248107"
Community content is available under CC-BY-SA unless otherwise noted.