The Canadian War Museum (CWM) (French language: Musée canadien de la guerre) is Canada's national museum of military history.[2] Located in Ottawa, Ontario, the museum covers all facets of Canada's military past, from the first recorded instances of death by armed violence in Canadian history several hundred years ago to the country's most recent involvement in conflicts. It includes major permanent exhibitions on wars that have been fought on Canadian soil, the total wars of the twentieth century, the Cold War and peace support operations abroad, and Canada's history of honouring and remembrance. There is also an open storage area displaying large objects from the Museum's collection, from naval guns to tanks, from motorcycles to jet aircraft. The exhibits depict Canada's military past in its personal, national and international dimensions, with special emphasis on the human experience of war and the manner in which war has affected, and been affected by, Canadians’ participation.

Much of the Museum's public exhibition space is devoted to its Canadian Experience Galleries. These displays underline the profound effect that war has had on Canada's development and the significant role Canadians have played in international conflicts. Their content is a rich mixture of some 2,500 objects from war art to armoured vehicles, as well as scores of audio-visual displays and many hands-on activities. A changing program of temporary or special exhibitions, plus public programs and special events, complement the experience offered in the permanent galleries. The CWM also houses the Military History Research Centre, a leading library and archival research facility, and a large collection of some 500,000 artifacts, including uniforms, medals, weapons, war art, aircraft, military vehicles and artillery.

The Museum originated in 1880 as a collection of military artifacts in the possession of the Canadian federal government, organized by militia officers of the Ottawa garrison. Its first facility was a series of rooms in the Cartier Square Drill Hall. The collection was later adopted by the Public Archives of Canada. The Canadian War Museum was officially established in 1942. The collection of war artifacts gained its own dedicated facility in 1967 when it moved to the former Public Archives building on Sussex Drive in Ottawa (currently the Global Centre for Pluralism). That location was too small for the Museum's growing post-war collection, most of which was eventually stored at a west-end Ottawa warehouse known as Vimy House.

In the 1990s, the federal government made plans to relocate the War Museum to a new site east of central Ottawa, near the Canada Aviation Museum. The proposed site was criticized for its distance from the downtown core, and a more prominent location on the Ottawa River was later selected on LeBreton Flats, just west of Parliament Hill. The new location also allowed for ceremonial processions between the National War Memorial and the new War Museum, and was situated in an urban space soon to begin redevelopment.

The new facility, designed by a joint venture of Moriyama & Teshima Architects of Toronto and Griffiths Rankin Cook Architects of Ottawa, opened on May 8, 2005, the 60th anniversary of the end of the Second World War in Europe, or V-E Day. The new, modern building emerges from the ground just west of Booth Street and rises progressively higher at its eastern end, closest to Parliament Hill. Its textured concrete walls and roof are somewhat reminiscent of a bunker, while a partially grass-covered roof is consistent with the Museum's theme of regeneration and its environmentally friendly design. The building rises in the east to a large fin, clad in copper that matches the rooftops of other prominent public buildings in the national capital. The small windows on the fin spell out in Morse code "Lest we forget" and its French equivalent, "N'oublions jamais".[3] The copper used on the interior of the building was recovered from the Library of Parliament during refurbishment of the Library's roof in 2004.[4]

Battleground: Wars on Our Soil, from earliest times to 1885[edit | edit source]

This gallery explores the history of war on Canadian soil and the way in which armed conflict affected the evolution of the country and its peoples. It includes First Peoples warfare, the alliances and conflicts that marked the relationship between First Peoples and Europeans, and the imperial rivalries that marked most of North America's early history. Content includes the Seven Years' War, the American Revolution, the War of 1812, and conflicts in the Canadian West in 1870 and 1885.

Canadian forces went abroad in 1899 and again in 1914 to fight in wars as part of the British Empire. This gallery covers the South African War and the First World War, and ends with the Statute of Westminster (1931), which granted Canada and the other dominions political autonomy within the Empire. The gallery covers the battles and campaigns of both wars, but especially the trench warfare in France and Belgium from 1915 to 1918, and battles such as the Somme, Vimy, Passchendaele, and the Hundred Days. It also covers the home front, air and naval warfare, military medicine, artillery, the plight of enemy aliens, and strategy and tactics.

This gallery starts with the rise of aggressive dictatorships in Germany, Italy, and Japan in the 1930s and follows Canada's role in the ensuing world war until it ended in 1945. Early displays cover Adolf Hitler and the rise of fascism including an infamous Mercedes limousine used by Hitler at Nazi rallies.[8] The main exhibits cover Canada's initial land, sea and air responses to the fighting in Europe, the costly Battle of the Atlantic, and the gradual mobilization of the Canadian home front for a total war effort. Later displays include Dieppe, the air war, the fighting in Italy, Normandy, and the Netherlands, and the eventual surrender of the Axis powers and the cost of war. Homecoming is the final exhibit in the gallery.

A Second-World War era Sherman tank nicknamed "Forceful III", is dedicated to the memory of the members of the Governor General's Foot Guards killed during the Second World War while operating as an armoured regiment.[9]

A Violent Peace: The Cold War, Peacekeeping and Recent Conflicts, 1945 to the present[edit | edit source]

This gallery covers the period from the immediate onset of the Cold War following the end of the Second World War to the present, detailing Canadian defence efforts at home and abroad, including those in NATO, NORAD, and the United Nations; wars in Korea, the Persian Gulf, Kosovo, and Afghanistan; espionage, domestic security, civil liberties, and popular culture; and Canadian involvement in wars since the fall of the Berlin Wall in 1989. The material in this gallery ranges from Cold War comic books and board games to peace signs and the story of Nobel Prize winner Lester Pearson, and includes an interactive space for visitors to leave their own reflections on war, peace, and remembrance.

The RCL Hall of Honour chronicles Canada's history of remembrance with a multi-media display of objects and stories from First Nations oral traditions to contemporary anniversaries and personal commemorative websites. It includes military honours, certificates of service, war art, Remembrance Day poppies, and other material used by Canadians to remember and commemorate their military past and to honour those who have served. Among the highlights is the original plaster model for the National War Memorial in downtown Ottawa, site of the annual national Remembrance Day service. 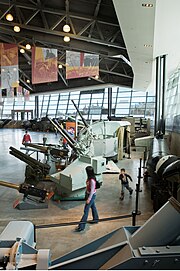 The multi-purpose LeBreton Gallery is a massive display area of large objects and a busy space for public programs, special events and private rentals. The artifacts on display include artillery, aircraft, armoured and non-armoured vehicles, and naval weapons. Among the gallery's objects are: a CF-101 Voodoo jet; an M109 self-propelled howitzer; an East German BMP infantry fighting vehicle; tracked artillery from the First World War; a Chieftain tank; a Jagdpanzer IV tank destroyer; an M3 Lee; a fully restored Panzer V Panther tank; a Panzer II; a Leopard C1 tank; searchlights; rare motorcycles; Field Marshal Alexander's staff car; a Canadian Iltis jeep and other vehicles with service in the Balkans during the 1990s; a Molch midget submarine; underwater mines; a T-34; a Valentine tank recovered from a bog in 1990[5]; an Italian L3/35 tankette; and Weather Station Kurt, an automated weather station planted by a German U-boat on the coast of Labrador in the 1940s.

This narrow, soaring hall with angled walls and a narrow triangular window that frames the Peace Tower on Parliament Hill is "a physical representation of hope for a better future."[10] High narrow windows spell out in the dots and dashes of Morse Code "Lest We Forget" and "N'oublions jamais". The ground floor features plaster casts (maquettes) used by sculptor Walter Allward in the design of the Canadian National Vimy Memorial in Vimy, France. The Peace Tower on Parliament Hill is visible from the mezzanine level and is perfectly framed between two window mullions. The copper used to clad the interior surface of the tower (seen from the LeBreton Gallery) was reclaimed from the Library of Parliament after a roof renovation.

Located outside the ticketed exhibition area in the Museum's spacious foyer, Memorial Hall is a space for quiet remembrance and personal contemplation. The hall contains a single artifact: the headstone of Canada's Unknown Soldier from the First World War. Sunlight through the Hall's only window directly illuminates the headstone every Remembrance Day, November 11, at precisely 11 a.m., the moment the Great War ended in 1918.[11] The hall is also aligned on one axis with the Peace Tower of the Parliament Buildings.[12]

Wars on Our Soil, from earliest times to 1885

The Cold War, Peacekeeping and Recent Conflicts, 1945 to the present

The Canadian War Museum includes a large collection of war art. The collection of over 13,000 works of art from World War I to the present day was begun in 1916 by Max Aiken (Lord Beaverbrook). It was transferred to the War Museum from the National Gallery of Canada in 1971.[13] Select works are displayed at the museum within the individual permanent galleries as well as in approaches to the Lebreton Gallery and the entrance lobby.

Retrieved from "https://military.wikia.org/wiki/Canadian_War_Museum?oldid=5124303"
Community content is available under CC-BY-SA unless otherwise noted.