The Canon de 155 C modèle 1917 Schneider, often abbreviated as the C17S, was a French howitzer designed by Schneider. It was essentially the Canon de 155 C modèle 1915 Schneider fitted with a different breech to use bagged propellant rather than the cartridge cases used by the older howitzer. It was used by France, Italy, Russian Empire, Belgium and the United States from 1917 during World War I and was widely exported after the war. Surviving weapons were in service with France, Poland, Greece, Italy, Belgium, the United States and Finland during World War II. Captured weapons were used by the Germans for their 2nd-line artillery and coast defense units.

The Canon de 155 C modèle 1915 was based on Schneider's 152 mm (6.0 in) howitzer that had been sold to the Russian Empire in 1910. Schneider had modified that howitzer's carriage for use with their long-range Canon de 105 mle 1913 Schneider gun so it was relatively simple to mount a new, longer 155 millimetres (6.1 in) barrel on the carriage and recoil system of the gun. Production began in 1915.[1]

The Mle 1915 was a conventional design with a hydro-pneumatic recoil system mounted under the barrel, a gun shield to protect the crew and a box carriage with wooden wheels. It used an interrupted-screw breech with separate-loading ammunition; the shell being loaded first followed by the proper amount of propellant in a brass cartridge case. A loading tray was hinged to the left side of the cradle. It was swung into position after the breech had opened to hold the shell before it was pushed into the chamber, which had a catch to hold the shell in place until it could be rammed, but had to be moved out of the way before the breech could be closed for firing. It could be towed by a team of eight horses if a two-wheeled limber was placed under the trail and the barrel pulled back along the trail to move the center of gravity towards the limber. For (slow) motor-traction no limber was necessary and the trail was hooked directly to the tractor.[2] 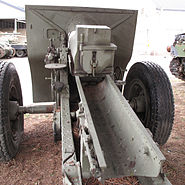 The French Army preferred bag charges for its ammunition because the brass cartridge cases used by the Mle 1915 were expensive to produce, both in money and in the amount of brass required. This became a real problem during the war given the vast number of shells expended and Schneider was asked to redesign the gun to use a deBange obdurator and allow it to use bagged powder. Schneider agreed and adapted the breech of the Canon de 155mm GPF to fit the barrel of the Mle 1915, but this took quite a bit of time due to the press of existing work and the new Mle 1917 howitzer didn't enter service until late 1916. The main difference between the Mle 1915 and 1917 was in the breech. Many guns had their loading trays removed because it slowed down the rate of fire; a portable shell tray was used instead by the loaders. Some three thousand were built.[4] Additionally, many of the Mle 1915s were refitted with the new breech.[2]

During World War I it became the standard heavy howitzer of the French Army during the later stages of the war. 2043 were still in service with France in 1939. The Germans designated guns that fell into their hands as the 15.5 cm sFH 414(f).[5]

The United States adopted the Mle 1917 as the 155 mm Howitzer Carriage, Model of 1917 (Schneider). The Model 1918 built in the US differed somewhat from French models, with a straight rather than curved shield, rubber rather than steel tyres on wheels, a pivoting spade and a slightly different firing mechanism.[6] US units were in action in France in 1918 with French-built guns. The first US regiment equipped with US-made guns was about to embark for France when World War I ended.[7]

Both the M1917 and M1918 howitzers were upgraded with air brakes, new metal wheels and pneumatic tires during the interwar period and remained the standard American heavy howitzers until superseded by the M1 howitzer beginning in late 1942. They saw combat with both U.S. Army and Marine artillery units throughout World War II.[8][9]

Some were sold to Russia during the war, but nothing is known of numbers or their use.[5] Apparently the Soviets rebarreled surviving howitzers to use their standard 152 mm cased ammunition,[10] but none seem to be on hand on 22 June 1941 at the start of Operation Barbarossa[11] although the Germans captured some and gave them the designation of 15.5 cm sFH 449(r).[12]

Schneider sold four C15S and eight C17S howitzers to Finland during the 1920s, known in Finland as the 152 H/15 and 152 H/17. These were rebarreled in Finland's standard 152 mm although they retained their original breeches, which meant that the H/15 used Russian-style cartridge cases and the H/17 used bagged powder. The H/15 had steel-rimmed wooden wheels that were suitable only for horse-traction, but these were later replaced by wheels with sponge rubber tires more suitable for motor traction. They were used for training during peacetime. During the Winter War the H/15s served with the 3rd Separate Heavy Artillery Battery while the H/17s were assigned to Heavy Artillery Battalion 3. During the Continuation War they saw combat with Heavy Artillery Battalions 24 and 25 as well as Field Artillery Regiment 3. They were retired after the end of World War II.[13] Germany sold a total of 166 captured howitzers to Finland, the first batch of 15 arriving in October 1940 and 147 arriving over the course of 1941. The last four arrived in 1944. They were heavily used during the Continuation War, serving with five heavy artillery battalions and eight field artillery battalions. Only 14 were lost to the Soviets in 1944. The remaining howitzers were used for live-fire training and warehoused for future use. New twin pneumatic wheels were fitted during the 1960s, and the guns were retained through the 1980s for live-fire training.[10]

Poland acquired some C17S from France after the end of World War I and bought a license as well. They designated it as the Haubica 155mm wz. 1917. Some 340 were in service in September 1939 when the Germans invaded.[14] Each of 39 Polish active infantry divisions had a horse-drawn heavy artillery battalion with three 155 mm howitzers and three 105 mm guns (they were absent in reserve divisions).[14] There were also twelve heavy artillery battalions of C-in-C reserve, each with twelve howitzers.[14] The rest were in reserve. Captured Polish howitzers were taken into German service as the 15.5 cm sFH 17(p).[5]

18 American guns were issued to the 2/1st Field Regiment, Royal Australian Artillery in the Middle East during December 1941. All were brought back to Australia when the regiment returned in 1942. Three guns are believed to be in various displays and memorials.

Belgium received some howitzers from France during World War I, but quantities are unknown. Weapons captured after Belgium's surrender in 1940 received the designation of 15.5 cm sFH 413(b) by the Germans.[5]

The Bolivian Army received in 1976 a donation of 16 howitzers from the Argentine Army. Corresponding to both models used in Argentina and known as Obús Schneider L.15.05 modelo 1928calibre 155 mm and Obús Schneider L.30.05 modelo 1928 calibre 155 mm. The shipment Consisted of 2 batteries (each with 4 pieces) from each model. The guns are still in service in the artillery regiments ReA-2 "BOLÍVAR" (1st MECHANIZED BRIGADE) and RA-3 "PISAGUA" (3rd ARMY DIVISION).

Greece had a total of 96 howitzers when the Greco-Italian War began in October 1940. They were assigned to the corps-level heavy artillery battalions.[16] Italy seized them after Greece surrendered in May 1941.[17]

Thirty-six C17S's were in Yugoslav service by the 1920s although it is unclear whether these were weapons furnished to Serbia during World War I or bought by Yugoslavia during the 1920s.[18]

Exactly how many howitzers were captured by Germany in the early years of World War II is not known, but Germany sold a number to Finland, reinforced the Atlantic Wall with 100[19] and equipped second-line infantry and static divisions based in France such as the 331st, 709th, 711th, and the 716th.[20]

The first guns were procured in France in 1917, the weapon being declared standard for Army use in November 1922, although their first military use was in Africa in 1921 during the assault at Turiet Hamed. The gun was also built under license at Trubia and were used by the Regimientos de Artillería Pesados (Heavy Artillery Regiments). One was captured by revolutionaries in the Trubia factory during the Asturian miners' strike of 1934, although it was ineffective due to the lack of fuzing for their shells; the gun was damaged when a dynamite cartridge bundle used as substitute for fuzeless shells exploded inside. The gun was heavily used during the Spanish Civil War by both sides. During the SCW and World War II some guns were used as coastal defence weapons to try improve Spanish coastal defences as nothing more suitable was available. It remained in service until the 1950s when they were replaced by more modern equipment. There are many surviving pieces, of Spanish and French construction, in museums and as monuments around Spain.[21]

US Model 1918 with barrel pulled back in traveling position

An American battery position near Varennes in 1918. 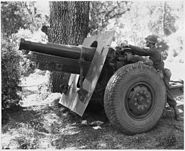